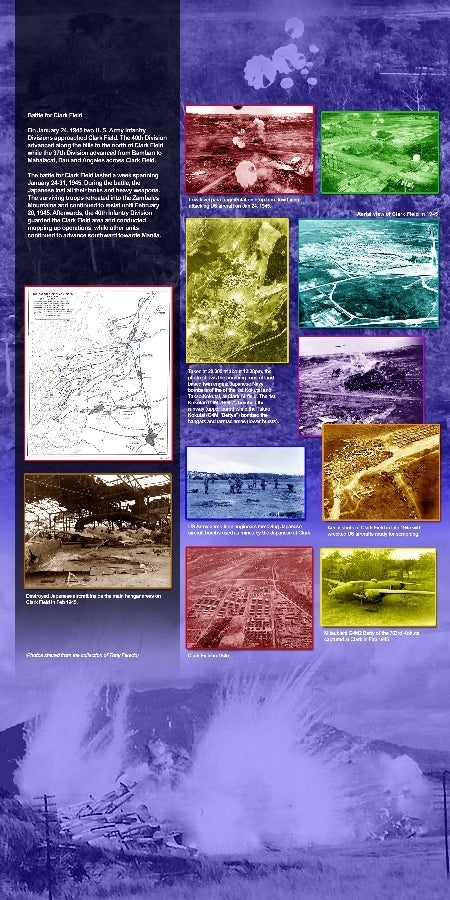 CLARK FREEPORT — What happened in various parts of the Philippines during World War II?

At least 30 of the bank’s 60 branches feature local World War II history to pay tribute to the courage and sacrifices of Filipino veterans for national freedom.

They actually own PVB because half of the bank’s seed fund in 1963 came from the $20-million reparation payment of Japan to them.

“We want to educate the youth on this history of the Philippines in World War II,” former PVB president and chief operating officer, Nonilo Cruz, said of the History Walls project.

These walls consist of permanent panels of photographs, video documentaries and display cases of memorabilia.

The PVB branch in Building 2435 on E. Quirino Street here opened its history wall for public viewing in 2017 to remember the 72nd anniversary of the retaking of Clark Field by two US Army Infantry Divisions from the Japanese Imperial Army’s Kembu Group in less than a month of air and land combat in 1945.

Built in 1919 next to Fort Stotsenberg and regarded as the most important military air field in the country, the erstwhile Clark Field was taken by the 30,000-men Kembu Group immediately after Japan attacked Pearl Harbor in Hawaii on Dec. 8, 1941.

After months of defense by Filipino and American soldiers, Bataan and Corregidor fell to enemy’s hands on April 9, 1942.

An account in the History Walls says: “The US Army’s 37th and 40th Divisions attacked Clark Field on Jan. 24, 1945 and within a week, the Kembu Group lost all its heavy weapons and tanks.

“The survivors took up harassing positions in the Zambales mountains, where they infiltrated Clark Field and destroyed aircraft and equipment in night raids.”

It recalls that “Exhausted, the 40th Division garrisoned Clark Field while the unit refitted. The XIV Corps secured the Clark Field air center for the Allied Air Forces—construction work began and the Fifth Air Force planes fly in from repaired strips.

Filipino veterans share their accounts in documentaries that are played during banking hours.

The display cases feature a copy of the “instrument of surrender” that Gen. Tomoyuki Yamashita and Vice Adm. Denhici Okochi of the Japanese army and navy, respectively, signed at Camp John Hay in Baguio City on Sept. 3, 1945.

The documentary “Unsurrendered 2: The Hunters ROTC Guerrillas” shares the story of college cadets who resisted the Japanese invasion, mounted operations and ambushes and launched the raid on Los Baños in February 1945.