Walk and learn to save PH native tree species 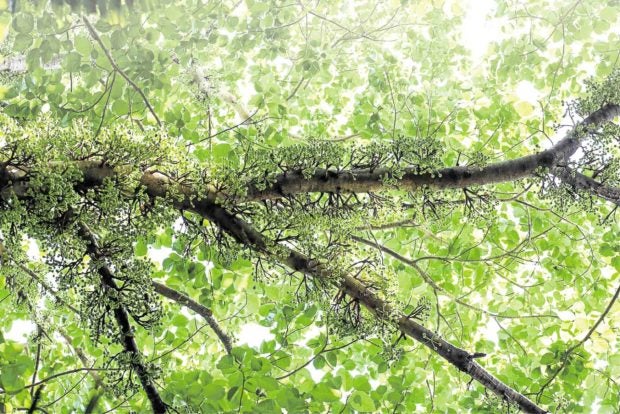 TREE WALK Plant enthusiasts embark on a tree walk at the UP IB-EDC Binhi Threatened Species Arboretum to learn more about native and endemic plants of the country from resident experts like Ramon Bandong (bottom right). Fig trees like the “tangisang bayawak” (top) are indigenous to the Philippines. —PHOTOS BY JAM STA. ROSA

Ramon Bandong awaits visitors at the entrance of the University of the Philippines’ Institute of Biology (UP IB), where he is the resident plant expert.

His trusty garden shears keep his hands busy as he prepares for another Thursday tour of one of UP Diliman’s best-kept secrets—a forest he has tended for more than 30 years.

Hidden behind the institute’s white walls is a rarity in the bustling metropolis: the 1-hectare UP IB-Energy Development Corp. Threatened Species Arboretum. It is home to more than 96 premium tree species, mostly endangered, as well as five of the 12 forest formations in the country.

“There are species that are under threat, their population in the wild decreasing. At this point, they need a little help or intervention in the form of arboretums to house them,” says David Ples, a site guide and research assistant at the IB.

Indigenous trees are at the center of the arboretum. Native species are naturally bound to a place and coexist with the ecosystem.

“These are plants that are ours, that [represent] the Philippines. If we don’t recognize their importance now, who will?” says Abigail Garrino, also a site guide and research assistant.

A low path leads Bandong and his group to a fernery, where Selaginella, usually green in color, immediately catches everyone’s attention. Sunlight turns the blue-green spike moss iridescent—a quite uncommon feat in nature, because the color blue is rare and hard to produce biologically.

Diliman was named after a fern that used to dominate the area, but when Bandong first came to UP, he saw no sign of it. Thanks to his green thumb, however, he was able to revive the renowned Diliman fern in the arboretum.

Now the visitors troop to a bridge as quaint as in a fairy tale, and wonder what awaits them behind the brown tree trunks.

Dry mahogany leaves crunch beneath their feet as they move toward the first area, a clump of towering trees, the tropical lowland evergreen rainforest.

Mahogany, commonly used in tree-planting activities, is actually an invasive foreign species that ideally should not be propagated in the Philippines. Tagged as allelopathic, it releases chemicals that change the composition of the soil for other naturally occurring plants and overcomes them. Birds shun it.

Garrino cites the importance of native trees: “After joining numerous tree-planting activities, I have learned that all the efforts I have put in may become futile if the wrong kinds of plants [are used]. Worse, they could have a negative impact on the environment.”

In the second area, forest over limestone, are many endemic plants found only in the Philippines.

“If Japan has cherry blossoms, the Philippines has the Philippine teak,” says Garrino. “A whole canopy would be covered in blossoms since they’re at the top of the tree.”

Philippine teak, an endemic tree that bears vibrant purple flowers and rough leaves, is commonly found in the province of Batangas.

At the lower montane rainforest, Bandong introduces the katmon, a native ornamental tree. A toddler in the group takes a bite of its tiny fruit and puckers up at the taste. The katmon fruit can be used as a souring agent for the famous Filipino dish sinigang.

“Do you know this plant?” Bandong animatedly asks the group as they reach the leaf-carpeted semi-evergreen rainforest. He points to a familiar tree, the one kids love to climb. “Mango!” someone exclaims. He nods in agreement but says quickly: “The difference is, this one, the pahutan, is native.” 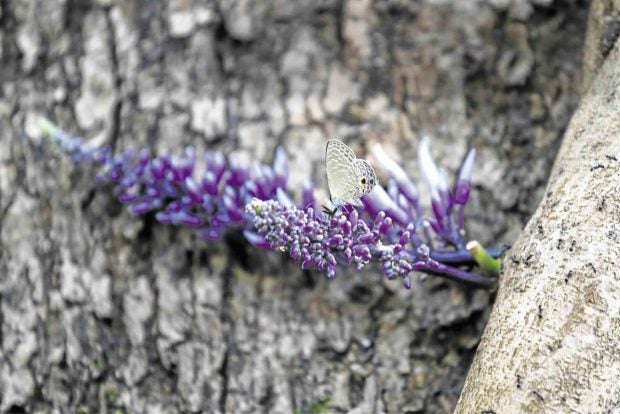 A relative endemic species of jade vine boasts vibrant lilac buds that will eventually bloom. It is among the endemic and threatened species of Philippine flora found during tree walks around the University of the Philippines IB-EDC Threatened Species Arboretum in Diliman. —JAM STA. ROSA

“The [Indian] mangoes we are so proud of, we say that they’re grown here, but the species is not native,” Ples explains, adding:

“We have plenty of native species that can potentially become globally competitive [but] … we Filipinos don’t pay attention to our native trees.”

Bandong points to a plant hidden in a corner by a creek, inching away from it as he speaks: “That is the lipang kalabaw. Its sting is so itchy that even carabaos run away from it.”

He recounts how the plant helped the UP IB catch a burglar in the act, the itchy rash giving him away. “I always say it’s for biological warfare,” Bandong jokes.

Dandelion-like cotton balls from a kapok tree overhead land like dust on the visitors. It looks like snow in summer, but sadly, the tree is not indigenous. A similar one, ironically named malabulak (cotton-like), is native to the Philippines but lesser known. It can be used as stuffing for pillows and other items.

Circling the arboretum, the visitors are led to a shortcut often used by UP students. Bandong tells them to come closer as he holds up a small fig and cross-sections it, exposing numerous tiny wasps inside. Gasps fill the air as the visitors examine the fig tree dubbed tangisang bayawak. Fig trees are special because they are pollinated by a specific fig wasp.

The single point of Mount Makiling is much more biologically diverse than the whole continent of America, the site guides for the tour point out.

“Plant diversity in the Philippines is very rich,” says Lillian Rodriguez, assistant professor at the IB. “We are an archipelago, so we became isolated. Our plants are different from our neighboring countries and we have different endemic species.”

According to the late botanist Leonard Co’s Digital Flora, there are 9,432 native species of vascular plants in the Philippines. But despite being a biodiversity hot spot, much of our native plants remains unexplored.

“The problem is you can’t study these plants because you’re also scared for your life,” Rodriguez says, citing the communist insurgency in Mindanao as one of the hindrances to the conduct of research. “[Authorities] automatically assume you’re a member of the NPA (New People’s Army), and there are threats coming from both sides.”

The tour ends on a solemn note, as everyone gathers around the memorial of Co, one of the greats of Philippine botany. His knowledge of Philippine flora remains unmatched to this day, and his advocacy for native plants lives on in an organization he founded, the Philippine Native Plants Conservation Society Inc.

Co was killed by the military in 2010 while doing fieldwork in Kananga, Leyte, in the middle of a forest, doing what he loved. He was wrongfully Red-tagged by the very forces supposed to protect him from danger.

“Here in the Philippines, people who study plants, who study native trees and endangered species, they themselves are endangered,” Ples says.

Another threat to native plants is rapid deforestation.

“We need to know what trees are native in our country so that we can plant those to restore our forests,” Rodriguez says.

Environmental damage from unsustainable development and urbanization also endangers native species, many of which have yet to be discovered.

“It’s a race against time to ignite our collective consciousness of the unique flora around us,” says Ples.

For Garrino, another important part of fieldwork is the exchange of ideas with the locals. “When we come down from the mountain, they’ll borrow the plant identification guide … I watch them with amazement and nostalgia as I remember the days when I first fell in love with plants,” she says.

Much of the knowledge of native Philippine plants comes from our ancestors, Rodriguez says. Indigenous peoples who live in remote areas lack access to modern medical care and are thus the main sources of information on how to use native plants for healing.

“We have to take care of and propagate this knowledge, or it will be gone.” she says.

Plants give so much but ask for so little, according to Ples. The source of almost everything we need, plant compounds are usually studied for their groundbreaking potential and application in medicine and other fields.

The walking tour, #GubatSaSyudad (Forest in the City), sponsored by the IB and the Asian Institute of Tourism, is a way for advocates to spark interest and showcase the vibrancy of native biodiversity.

“Diversity is beautiful. And when you see something beautiful, there’s the urge to get to know more about it, and to get everyone else to see it,” Ples says.