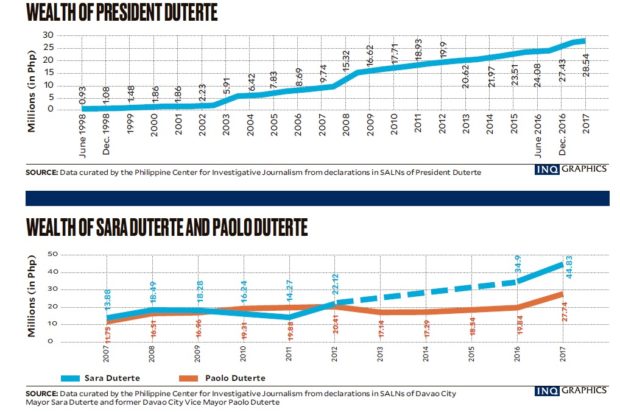 MANILA, Philippines — Whatever his family earns outside of politics is nobody’s business, President Rodrigo Duterte said on Saturday night in Iloilo City.

The President rose to the defense of his children following a media report on the allegedly unregistered law firm of his family and other undisclosed business interests.

While not naming the report and the news organization, he was apparently referring to a series of the Philippine Center for Investigative Journalism (PCIJ).

The series delved on the significant increases in the incomes of the President and his children, Davao City Mayor Sara Duterte-Carpio and former Vice Mayor Paolo Duterte, while they were in office.

“My children and I are being criticized, all about lawyering. What do they care about what happened to my law office?” he asked.

the President said he was not required to report what he earned through his own sweat.

‘None of your business’

“What we earned outside is none of your business, actually. That we have businesses and law firms, what a goddamn shit,” he said.

He made the remarks in a speech in Iloilo City before some 2,000 delegates to the 25th National Convention of the National Federation of Motorcycle Clubs of the Philippines at the Iloilo Convention Center.

Citing the statements of assets, liabilities and net worth (SALNs) of Mr. Duterte, Sara and Paolo, the report claimed that the Dutertes had an unregistered law firm and shares in other companies that they did not include in their SALNs.

PCIJ reported that Carpio & Duterte Lawyers, with Sara and husband Manases Carpio as partners, was not registered with the Securities and Exchange Commission.

The law firm, put up by Sara and her husband in 2008, opened an office at City Times Square II in Mandaue City on Feb. 13, 2019. Its clients included cigarette maker Mighty Corp., Panay Electric Co. and those that deal with the Bureau of Customs.

The President himself was a partner at Fabiosa Duterte Cimafranca Carcedo law office but he did not declare his interest in the firm in his SALNs, according to PCIJ.

PCIJ cited the prohibition on mayors and governors from exercising their profession. But the President said the law firm was a necessary option for their family.

He, however, said other people had no business poking their noses into their affairs, as long as it did not involve public funds.

“Our law firms and what happened to our business partnership, it’s not your goddamn business. It’s my worry. For as long as it’s not the people’s money,” he said.

He added: “You have to have a law office because there is an election every three years. And it’s so short. What if you lose this election, where would you go?”

Mr. Duterte argued that it was fine for a politician to own a law firm, as long as he did not practice law while in public office or give advice contrary to the government’s position.

“Well, there’s nothing wrong if we advertise our names. As long as you do not practice and you do not help people get something from government, that is illegal,” he said.

He added: “I am a lawyer, I worked hard for it, naturally I will have my name displaced. They say I shouldn’t be practicing so my name and Sara’s shouldn’t be there. You fools. We are just saying we are lawyers!”

The President said his wealth was inherited from his late mother, Soledad Duterte, and that he had lived with her even when he was Davao City mayor.

He added: “SALN? You didn’t work for that money. Were you the one who earned it? Why should I put it in my SALN?”

A government employee who does not declare certain assets in his SALN risks losing his job.

That happened to Chief Justice Renato Corona, who was found guilty by the Senate impeachment court of not declaring his dollar deposits in his SALN. Corona was ousted in 2012.

In his speech, the President accused PCIJ of being a paid hack used by his enemies to smear his family’s name and reputation.

PCIJ is an independent, nonprofit media agency that specializes in investigative reporting. It was founded in 1989 by nine Filipino journalists who realized, from their years on the beat and on the news desk, the need for newspapers and broadcast outlets to go beyond day-to-day reporting.

In 2000, it reported that then President Joseph Estrada, his family members and cronies allegedly acquired multibillion-peso lands and houses in Metro Manila, Baguio and Tagaytay on Estrada’s behalf.

Estrada was impeached but was toppled by the Edsa uprising in January 2001. The Sandiganbayan found him guilty of plunder on Sept. 12, 2007, and was pardoned a month later by then President Gloria Macapagal-Arroyo. —With a report from Inquirer Research