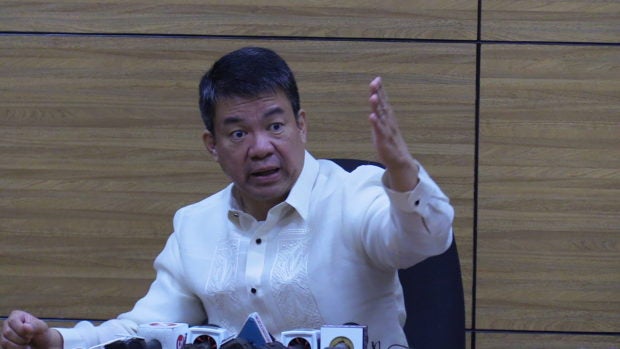 (My point is do not waste Senate’s time to investigate the shabu shipment. There it goes again. Who could be the witnesses?)

Pimentel said this after Senate Minority Leader Franklin Drilon suggested that they should reopen the Senate Blue Ribbon committee’s hearing on the “shabu” shipment after a video linking Paolo to drugs went viral on social media.

Pimentel said the Senate investigation will only look into the presidential son’s alleged tattoo but it will be difficult for them to interpret it.

“Sasabihin na naman diyan yung tattoo sa likod ipakita. Kahit ipakita mo yung tattoo, mai-interpret mo ba ang tattoo? Ano interpretation ng tattoo? [The probe will again mention the tattoo behind [Paolo Duterte’s] back. Even if he shows the tattoo, can you interpret that? What is the interpretation of a tattoo],” he said.

In September 2017, the presidential son attended the Senate hearing into the P6.4-billion shabu shipment that slipped through the Bureau of Customs (BOC) following allegations that he was involved in the powerful “Davao Group” within the Customs.

However, Paolo had denied involvement in the smuggling.

But, Senator Leila de Lima, insisted that Paolo should show the tattoo on his back to dispel the allegations against his involvement in the illegal drug trade.

Senator Antonio Trillanes IV had earlier accused that Paolo was a member of the drug “triad” based on a dragon-like tattoo on his back.

Pimentel, who is the former Senate President, lamented that Senate should not waste government resources and time just because of a video circulated in the internet.

(As a former Senate President, let us not waste our resources. Just because of a viral video, we will investigate the shabu shipment? Let’s not do that. It will only waste our time.)

However, Pimentel clarified that he does not oppose to any investigation but to restart an investigation, the allegation must have a “logical basis.”

The video titled, “Ang Totoong Narcolist [The True Narcolist] Episode 1,” was posted on Tuesday which featured a man in a hoodie accusing Paolo of receiving payoffs from a drug syndicate./jpv