Senator Antonio Trillanes IV claimed on Thursday that Davao City Vice Mayor Paolo Duterte was a member of the “triad” based on a “dragon-like” tattoo on his back.

“Meron ka bang tattoo sa likod mo?” Trillanes asked Duterte during a Senate committee probe on the P6.4 billion worth of shabu smuggled into the country.

Duterte answered in the affirmative. But when Trillanes asked if his tattoo was “dragon-like,” the vice mayor invoked his right to privacy.

“That’s the physical evidence of his membership sa triad,” he added.

According to Trillanes, the “triad” was an international criminal investigation.

Duterte declined to show his tattoo when asked by Trillanes. 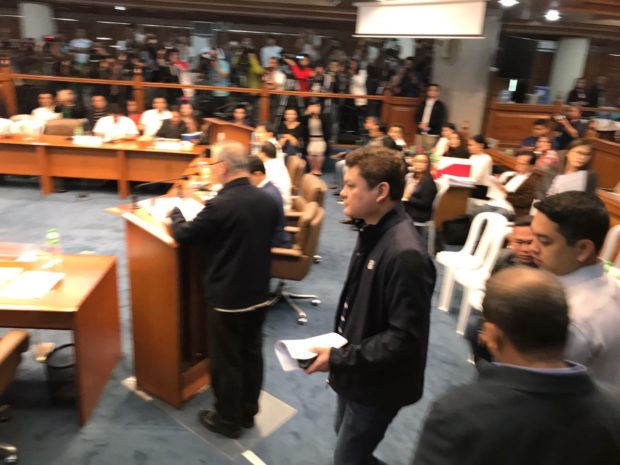 Following this, Senator Richard Gordon, chair of the Senate blue ribbon committee, cautioned Trillanes to not make allegations without basis.

“I would like to request respectfully, that they should not make any allegations here without basis… Be very careful because everybody has rights here, and I’m here to protect everyone’s rights,” Gordon told Trillanes.

Before this, Duterte denied all allegations thrown at him, saying they were all  “based on hearsay.”

“Once and for all, I now have the time to deny any and all baseless allegations thrown against me,” Duterte said.

“My presence here is for the Filipino people and fellow Davaoeños. I am very sorry but I cannot answer allegations based on hearsay,” he added. CBB

READ: Paolo Duterte: Allegations against me are ‘baseless,’ ‘hearsay’