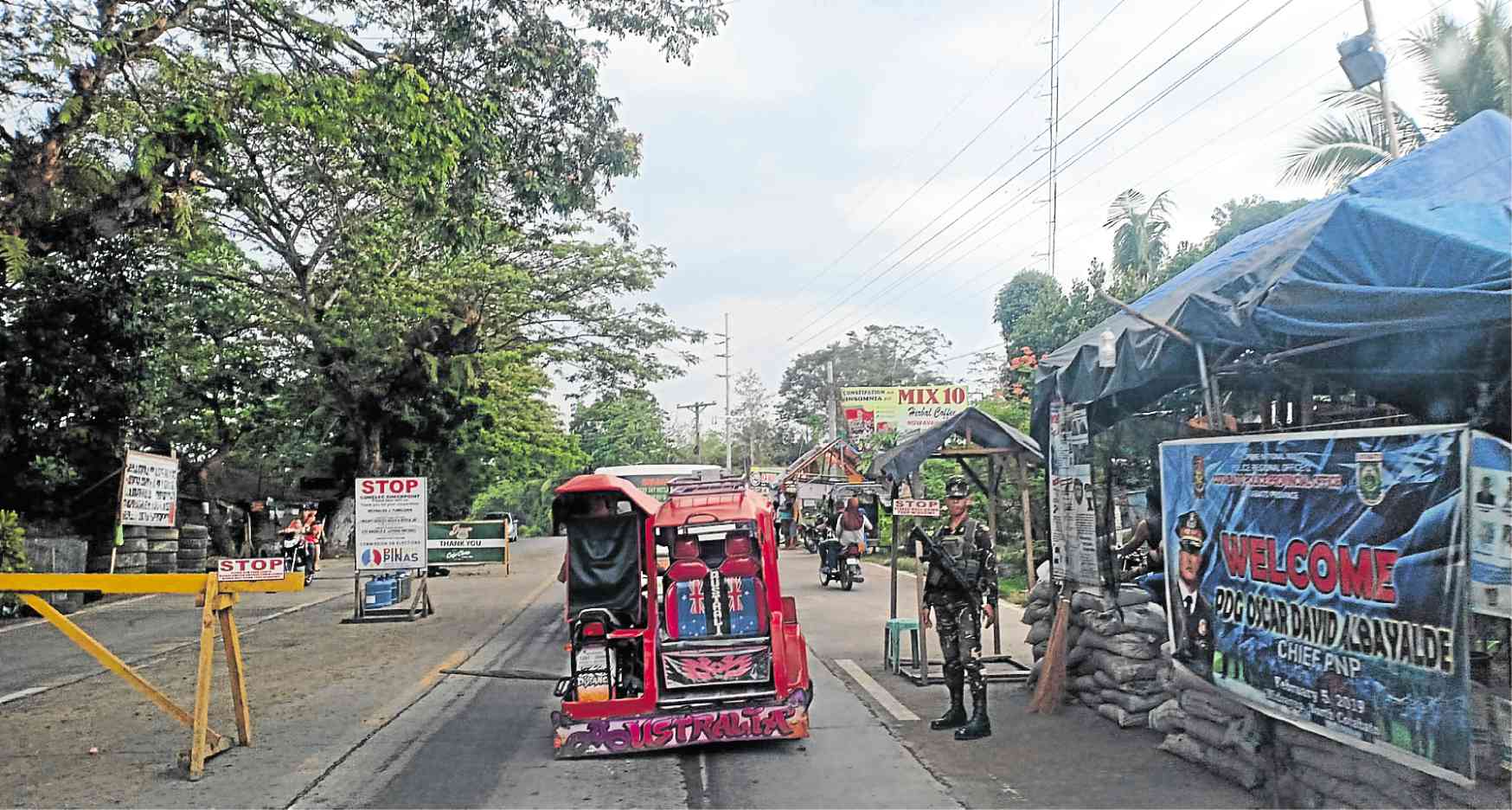 ALERT UP The military has strengthened security measures in the provinces of Cotabato and Maguindanao following the bombing in Isulan, Sultan Kudarat, that wounded 18 people on Wednesday. ORLANDO DINOY

ISULAN, SULTAN KUDARAT — Shrapnel recovered from the site of the blast that wounded 18 people here on Wednesday bore the “signature” of the Islamic State-linked Bangsamoro Islamic Freedom Fighters (BIFF), according to police and military officials.

Police Maj. Ronnie Dardo, spokesperson for the Sultan Kudarat provincial police, on Thursday said the improvised explosive device (IED) was similar to those used by BIFF in recent attacks in the region.

Bomb experts said the bomb was fashioned from highly combustible black powder placed inside a plastic jar rigged with broken nails and metal sheets. It was detonated using a mobile phone.

Among the victims of the blast at Carlito’s Chicken House were six children and a pregnant mother.

Dardo said police were looking at extortion as a motive based on text messages received by the restaurant owner from unknown senders who demanded P50,000 as monthly protection money.

Isulan Mayor Marites Pallasigue believed the bombing was not an act of terrorism. “I am convinced that it was motivated by extortion,” she told reporters on Thursday.

BLAST SITE Investigators cordon off an area fronting the restaurant hit by a blast in Isulan, as they mark spots where debris and shrapnel are found. —PHOTO COURTESY OF 6TH INFANTRY DIVISION

In Manila, Malacañang deplored the bombing as it appealed to the public not to let down their guard and watch out for any unusual behavior to thwart similar incidents.

“While we commit to bring the perpetrators to justice, we also continue to advise the public to remain vigilant in their surroundings and not to be hesitant in reporting any unusual behavior that they may observe to proper authorities,” said presidential spokesperson Salvador Panelo.

Maj. Gen. Cirilito Sobejana, commander of the Army’s 6th Infantry Division, said there were indications that BIFF was involved and that the attack could be a “diversionary tactic.”

Sobejana said the military was expecting retaliatory attacks from the BIFF after several of its members were killed during military operations in Maguindanao.

Abu Toraife’s group, the most rabid among the three BIFF factions, was blamed for the series of bomb attacks in Cotabato, Maguindanao and Sultan Kudarat, including the twin bombings in August and September last year.

Toraife’s brother, named Ali, one of the students in bomb making of the slain Malaysian terrorist Zulkifli bin Hir, also known as Marwan, was killed in clashes with military forces in Shariff Saidona Mustapha on Wednesday, about nine hours before the Isulan bombing.

Military officials said it was possible that the group bombed the restaurant to avenge the death of Ali.

Pallasigue said a security camera footage showed a man buying roasted chicken in an establishment in front of Carlito’s Chicken House. He was seen leaving a package behind, which exploded soon after he left.

The mayor was puzzled how the bomb could have entered the city despite the tight security and the many police checkpoints.

Pallasigue said the restaurant owner received another call on Thursday morning, warning of more bomb attacks if the owner would not pay protection money.

The military and the police in Sultan Kudarat have intensified security operations to get the culprits and thwart similar attacks.

Erlan Deluvio, Commission on Human Rights (CHR) acting regional director, urged authorities to arrest the bomber. He said the suspect would not receive “any amount of sympathy, much less, a legal succor from the CHR.” —WITH REPORTS FROM JULIE M. AURELIO AND JEANNETTE I. ANDRADE