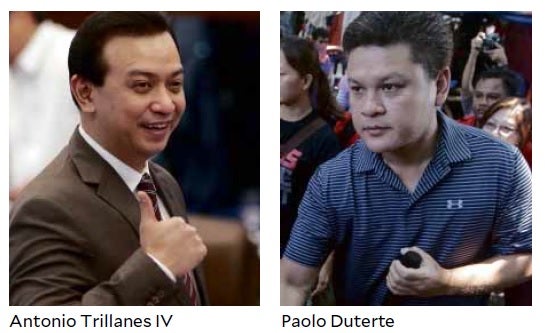 In a Facebook post, Duterte also threatened to file another string of cases against Trillanes for his “continued attempts to destroy my reputation.”

If there’s anything admirable about Mr. Antonio Trillanes, it is his relentlessness and talent to turn the absurd into…

Duterte, who is running unopposed as Davao first district representative, and his brother-in-law Mans Carpio had filed libel cases against Trillanes.

“He may deny it, but the video supposedly showing my involvement in the illegal drug trade in the country has been clearly stamped with the indelible Trillanes signature of being a desperate mercenary, one who has done nothing good but attack the government,” Duterte said.

“I have filed cases against Mr. Trillanes for ruining my name. I will file another string of cases for his continued attempts to destroy my reputation,” he added.

A video circulating the social media has named Duterte as among the “principals” of a drug syndicate who allegedly received millions of kickbacks from the group.

A hooded man alias “Bikoy,” who claimed to be a member of the syndicate, also appeared in the video and said that Duterte had his alleged code name in the group tattooed on his back.

However, Duterte said he will not show the tattoo on his back and instead dared Trillanes and “everyone behind the stupid and empty video exposé to back their claims against me.”

Malacañang has already dismissed the video exposé as a mere “black propaganda.”

Trillanes, one of the Duterte administration’s fiercest critics, previously accused the Presidential son of involvement in the large-scale illegal drug trade.

Trillanes was the one who first broached Duterte’s alleged dragon-like tattoo on his back which he said is a proof of his ties with the drug trafficking triad.

Paolo had rejected Trillanes’ dare for him to show his back to disprove the allegations during a Senate hearing, invoking his right to privacy. /jpv