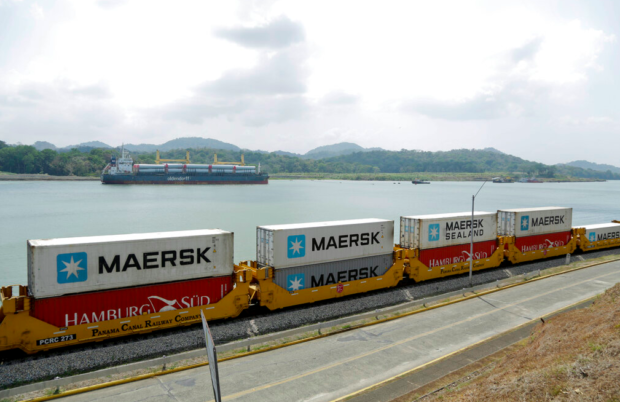 In this Feb. 25, 2019 photo, a Panama Canal railway train transport containers from the Atlantic to the Pacific Ocean alongside the Panama Canal in Gamboa, Panama. AP

PANAMA CITY — China’s expansion in Latin America of its Belt and Road initiative to build ports and other trade-related facilities is stirring alarm in Washington over Beijing’s ambitions in a region that American leaders since the 19th century have seen as off-limits to other powers.

China is hardly a newcomer to the region, but now it’s focusing on countries in Central America such as Panama. It’s a country of just 4 million people but its canal linking the Atlantic and Pacific oceans makes it one of the world’s busiest trade arteries and strategically important both to Washington and Beijing.

The Chinese ambassador, a Spanish-speaking Latin American veteran, has been talking up the benefits of Belt and Road on TV and Twitter. Beijing has flown professionals and journalists on junkets to China. It seems to be paying off.

“We see a big opportunity to connect Asia and America to Panama,” Panamanian President Juan Carlos Varela said during a visit to Hong Kong this week. He is due to attend a “Belt and Road” forum in Beijing with other foreign leaders this month, according to the Chinese government.

Chinese President Xi Jinping’s signature foreign initiative, Belt and Road is building railways, ports, power plants and other projects in dozens of countries around the globe. But the US, Japan, Russia, India and other governments fret that Beijing is gaining economic and strategic influence at their expense.

“A strong U.S. reaction, whether it is obvious in public or not, is coming,” said Matt Ferchen, an expert on China-Latin America relations at the Carnegie-Tsinghua Center in Beijing.

Panama’s leaders see China as a source of trade and investment but want to avoid conflict with Washington. Varela has said Panama’s relationship with China “will not affect relations with our strategic partner.”

Belt and Road is building on multibillion dollar deals for loans and investments in oil and mining in South America that Beijing made beginning in the 1990s.

Mexican President Manuel Andres Lopez Obrador has said he is considering joining Belt and Road. That would give it a foothold in a country bordering the US.

In the Caribbean, Trinidad and Tobago agreed last May to take part. In September, a state-owned Chinese company was awarded a contract to build a dry dock.

“We are all concerned about China and by the way that China is entering those countries,” Pompeo said at the Group of 20 meeting of major economies in Argentina in December. Such projects are not always driven by “good intentions,” he said.

In a coup for Beijing, Panama switched diplomatic recognition in June 2017 to China from Taiwan, the self-ruled island the communist mainland claims as its own territory. That cut Taiwan’s biggest political tie to Latin America.

President Donald Trump’s “America first” policies are not helping the U.S. cause in the region, said businessman Roberto Eisenmann, founder of Panama’s most influential newspaper, La Prensa.
Trump has yet to name a replacement for U.S. Ambassador John Feeley, who announced his retirement in January 2018.

“They are leaving a vacuum of leadership that obviously the Chinese are trying to fill,” said Eisenmann.

Two months after Pompeo stopped by, Varela welcomed Xi on an official visit and proclaimed his support for Belt and Road. Varela told Xi that Panama wants to “play a front-line role” in helping to build a more interconnected world.

The next day, Varela joined a ceremony where a consortium including two Chinese companies was awarded a contract to build a fourth bridge across the Panama Canal, whose ports of entry at its Atlantic and Pacific ends are operated by a Hong Kong consortium.

China, the canal’s second-largest user after the United States, has “considerable strategic interest” in Panama, said Margaret Myers, director of Asia and Latin America for the Inter-American Dialogue, a think tank in Washington.

“There are concerns about the possible effects on U.S. firms, on regional stability and, above all, on US influence in the region,” she said.

Launched in 2012, Belt and Road now encompasses most Chinese commercial initiatives abroad.
Most projects involve Chinese loans at commercial interest rates, adding to concerns Beijing is building a China-centered trade and political structure that might leave poor countries with too much debt.

Nepal, Thailand, Malaysia and some other countries have canceled or renegotiated projects due to costs or complaints they would do too little for local economies.

China has dismissed such concerns .

Steve Tsang, director of the China Institute at London’s School of Oriental and African Studies, said Beijing is trying to reshape how the initiative is perceived. But there’s no indication it is addressing problems that led to complaints that Sri Lanka, Kenya and other countries ended up with too much debt.

China’s ambassador, Wei Qiang, has been laying groundwork for deeper involvement in Panama.
In March 2018, he met with members of the opposition Revolutionary Democratic Party, whose candidate for this May’s presidential election, Laurentino Cortizo, is leading in polls.

Cortizo said he plans to meet with Wei to “look at the future of this relationship.”

Wei has invited Eisenmann, the newspaper founder, to his official residence to discuss Panama’s “plans for the ‘Silk Road’.”

China has proposed building a high-speed rail line from Panama City to the town of David near its western border with Costa Rica.

So far, projects awarded to Chinese contractors — the canal bridge, a cruise ship dock and a convention center — have been paid for by the Panamanian government. The country has yet to receive Chinese loans. /ee