PCG clarifies: Dredging ship in Batangas not from China but… 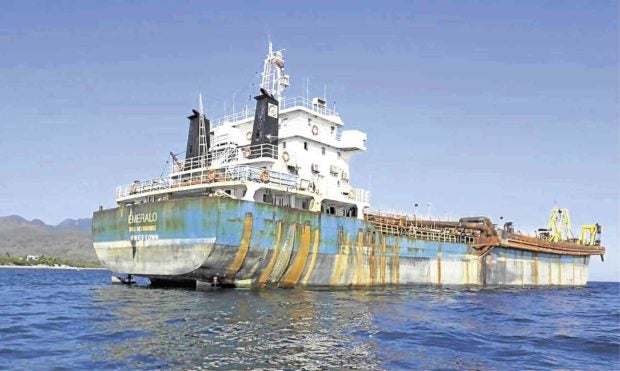 STAYING PUT The MV Emerald, a dredging ship that would be used in desilting the Lobo River in Batangas province, remains anchored close to the mangrove forest of Lagadlarin village in Lobo town, Batangas province, while officials discuss whether to proceed with the flood control project. —PHOTO COURTESY OF BATANGAS POLICE MARITIME GROUP

MANILA, Philippines — The Philippine Coast Guard (PCG) has clarified that the dredging ship anchored off Lobo, Batangas is not from China, saying that its nature of origin is actually Singapore.

(Actually, that is a sea lane and there is no problem with that. It just became controversial because some say it was a Chinese vessel, but in fact we have checked it and it is a Singaporean-based and registered in Africa.)

In an entry on marinetraffic.com, a hopper dredger named M/V Emerald weighing 2,990 tons said to be currently situated in Batangas, Philippines, is carrying the Flag of Sierra Leone.

A close look at the ship’s stern shows the word “Freetown,” which is the capital of Sierra Leone.

Previous reports said that the ship was set to gather around two million cubic meters of sand from Lobo river for the construction of a runway in the Hong Kong International Airport’s Three Runway System Project.

Talks about the country’s relation with the Chinese have peaked up in recent weeks, after Supreme Court Senior Associate Justice Antonio Carpio revealed that China can seize patrimonial assets, including Recto Bank, if the Philippines fails to pay its loans to China.

Earlier, the Armed Forces of the Philippines (AFP) revealed that an “extraordinary surge of 600 ships were within Pag-asa Island waters, followed by claims of administration critics that Chinese vessels were engaged in dredging and quarrying operations in Lobo and Zambales.

The government has been criticized for allegedly not taking any action, but Malacañang officials said that they have filed a diplomatic protest about the Pag-asa Island issue.

Earlier, Balilo said that M/V Emerald, a 2,900 ton dredging ship cannot be ordered to leave even with the removal of their ECC, because the Philippine Ports Authority (PPA) has allowed them to stay on Lobo’s waters.

The ship is apparently paying its anchorage fee to PPA.

According to Balilo, PCG personnel have talked with the ship’s crew, who were merely contracted to conduct dredging operations.

Read Next
LOOK: MPD simulates shooting, bombing for Holy Week security
EDITORS' PICK
Want to help local farmers? Shop small and eat Real Food
ICC is everything but a court of ‘white people’
Garcia softens stance, meets IATF halfway on swab-upon-arrival policy
Piolo Pascual: The Ultimate Heartthrob continues to level up
Manila is 78th most expensive city in the world for foreign workers
TeaM Energy pushes development programs to help in pandemic rebound
MOST READ
Sharon Cuneta on living in the US: ‘Nagagawa ko lahat ng normal na bagay’
Mike Nieto asks fans: ‘No below the belt remarks’ toward South Korea
Duterte-Duterte tandem possible but ‘winnability is another question’ — Binay
ICC is everything but a court of ‘white people’
Don't miss out on the latest news and information.