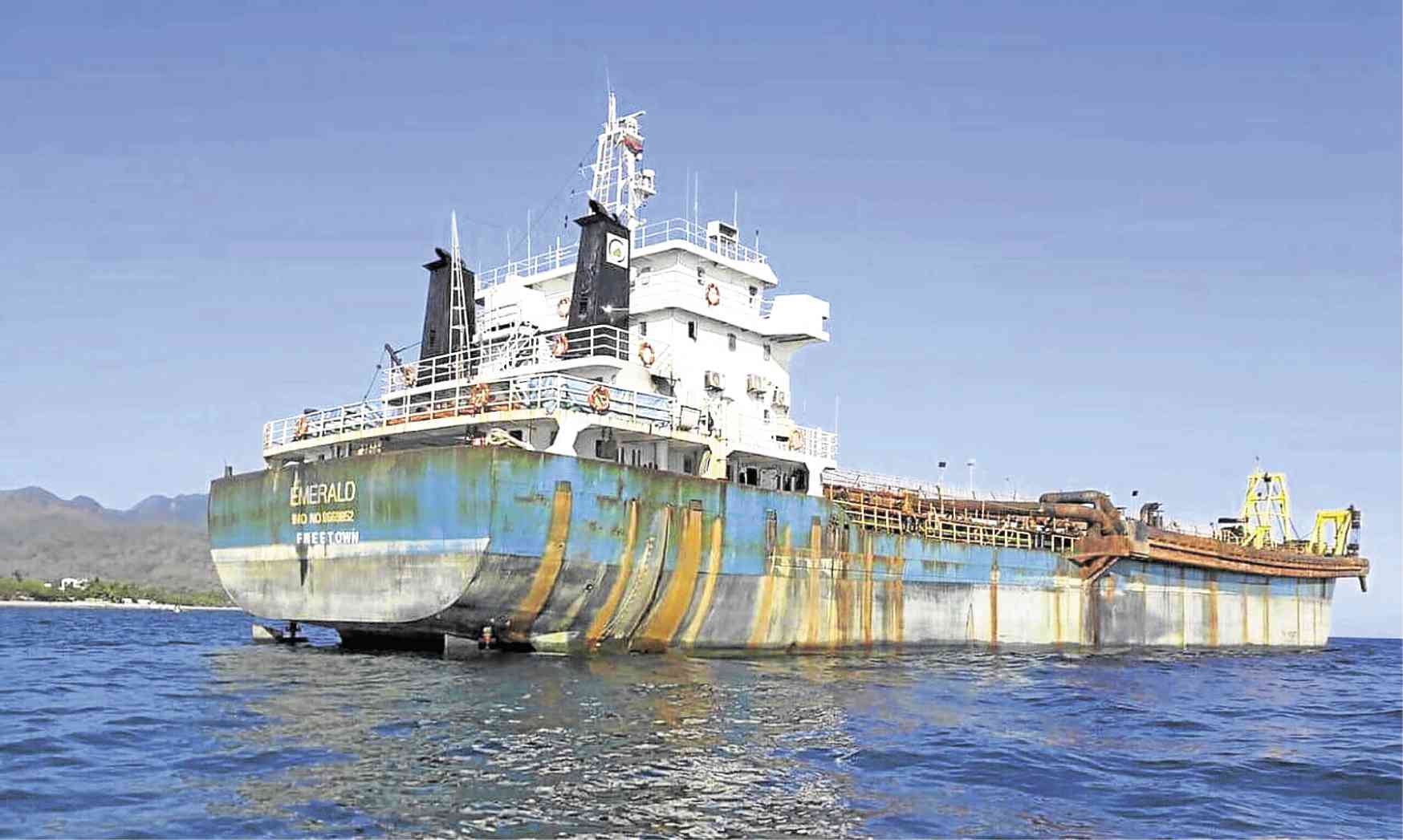 STAYING PUT The MV Emerald, a dredging ship that would be used in desilting the Lobo River in Batangas province, remains anchored close to the mangrove forest of Lagadlarin village in Lobo town, Batangas province, while officials discuss whether to proceed with the flood control project. —PHOTO COURTESY OF BATANGAS POLICE MARITIME GROUP

MANILA, Philippines — The Department of Environment and Natural Resources (DENR) on Wednesday suspended the environmental clearance certificate (ECC) for the dredging of a river in Batangas province following the unannounced arrival of a large Chinese-manned vessel close to a fishing village, a DENR official said on Wednesday.

Undersecretary Benny Antiporda said the department would also look into possible environmental destruction caused by the 2,990-ton MV Emerald, a hopper dredger, after it dropped anchor 500 meters from the 30-hectare mangrove reserve of Lagadlarin village in Lobo town last Thursday.

Environment Secretary Roy Cimatu ordered the regional office of the Environmental Management Bureau to suspend the ECC it issued in October 2018 to Seagate Engineering and Buildsystems to desilt the Lobo River for the town’s flood control project, Antiporda said.

Seagate, which contracted the dredger, did not budge despite an order by Lobo Mayor Gaudioso “Jurly” Manalo to send the ship away.

Leo Campos, Seagate chief operating officer and general manager, told the Inquirer that the company would begin operating “as soon as we obtain the final permit from the National Security Council (NSC).”

He explained that the NSC, which is chaired by President Rodrigo Duterte, had to first clear the operation of any foreign ship in Philippine waters.

Based on documents seen by the Inquirer, Seagate and former Lobo Mayor Virgilio Manalo, a younger brother of the incumbent, signed a memorandum of agreement (MOA) in 2008 to dredge up to 2 million cubic meters of sand and silt from the river at no cost to the town.

The sand would then be sold by Seagate for $2 per metric ton to Synergy Plus Holdings Ltd., which supposedly will use it for the reclamation and construction of the Hong Kong International Airport Three Runway System.

Synergy’s purchase order indicated that the sand would be taken from the riverbed using the trailing hopper suction dredging system, which essentially involves sucking the soil and unloading it on the ship.

The regional office of the Mines and Geosciences Bureau (MGB) denied Seagate’s application for a mineral ore export permit because the “source of mineral is not covered by any mining permit.”

A Feb. 20 letter to Campos by Krizia Ann Alberto, regional officer in charge of the MGB, said the MOA was not “a valid legal basis to conduct extraction and disposition of mineral resources within the subject area.”

Maria Paz Luna, the DENR director for Calabarzon, also said Seagate failed to secure other permits from other agencies, such as the Department of Public Works and Highways (DPWH), Department of Agrarian Reform, and Department of Social Welfare and Development, which “rendered the (2018) ECC infirm.”

Antiporda said the DENR had sent a team from the Biodiversity Management Bureau to look into potential damage to Lobo’s waters.

“In case they caused any impact on our biodiversity there, they will have to be penalized and punished,” he told the Inquirer in a phone interview, adding that both the vessel and Seagate could be held accountable for any damage.

Lobo is part of the Verde Island Passage, a marine sanctuary considered by scientists the world’s center of the center of marine shorefish biodiversity.

The ship’s anchor might have already damaged the sea grass, a breeding ground for fish and sea turtles, Manalo earlier told the Inquirer.

Lobo officials will not allow Seagate’s dredging because “they would destroy our sea and might even cause our dike to collapse,” Manalo said, referring to an ongoing dike project of the DPWH in the Lobo River.

Besides, he said Seagate’s dredging would just be redundant as another local company, FS Suntan Sand Corp., had already started dredging and desilting the river under a 10-year contract with the Lobo government until 2022.

Campos, whose office in San Pascual is just a few towns away from Lobo, said it was not true that they did not coordinate with the local and provincial governments about the dredging project, based on the 10-year-old MOA, and had met with Manalo about it last year.

The Inquirer obtained a copy of Seagate’s Dec. 10, 2018, letter to Batangas Gov. Hermilando Mandanas, informing the province of the dredging project.

“There might have been some miscommunication but I would presume they (expected) the arrival of the vessel because they knew about the MOA,” Campos said in a phone interview.

Manalo acknowledged the meeting but said he had “witnesses when I told him I’m not allowing it.”

He said the 2012 contract with Suntan Sand “supersedes” the 2008 MOA with Seagate, although there has been no resolution passed by the municipal council revoking the earlier agreement.

Campos said that the 2008 MOA specified the project should not entail any costs to the local government.

He said his company would be made to pay a 4-percent excise imposed by the Department of Finance, the local tax set by local ordinances, and P12 per cubic meter of sand or silt to be divided among the local government (which will get 30 percent), the provincial government (30 percent) and the village (40 percent).

“All our documents are correct, valid and legal,” Campos said.

He said they did not immediately start back in 2008 as the MOA prevented them from doing it “piecemeal.”

“For us to earn back (our investment), we are to execute (a deal with Synergy). Now we can do it continually,” Campos said.

He said Synergy came in offering its capacity and equipment for a “large-scale” project, such as its hopper dredger that Philippine companies did not have.