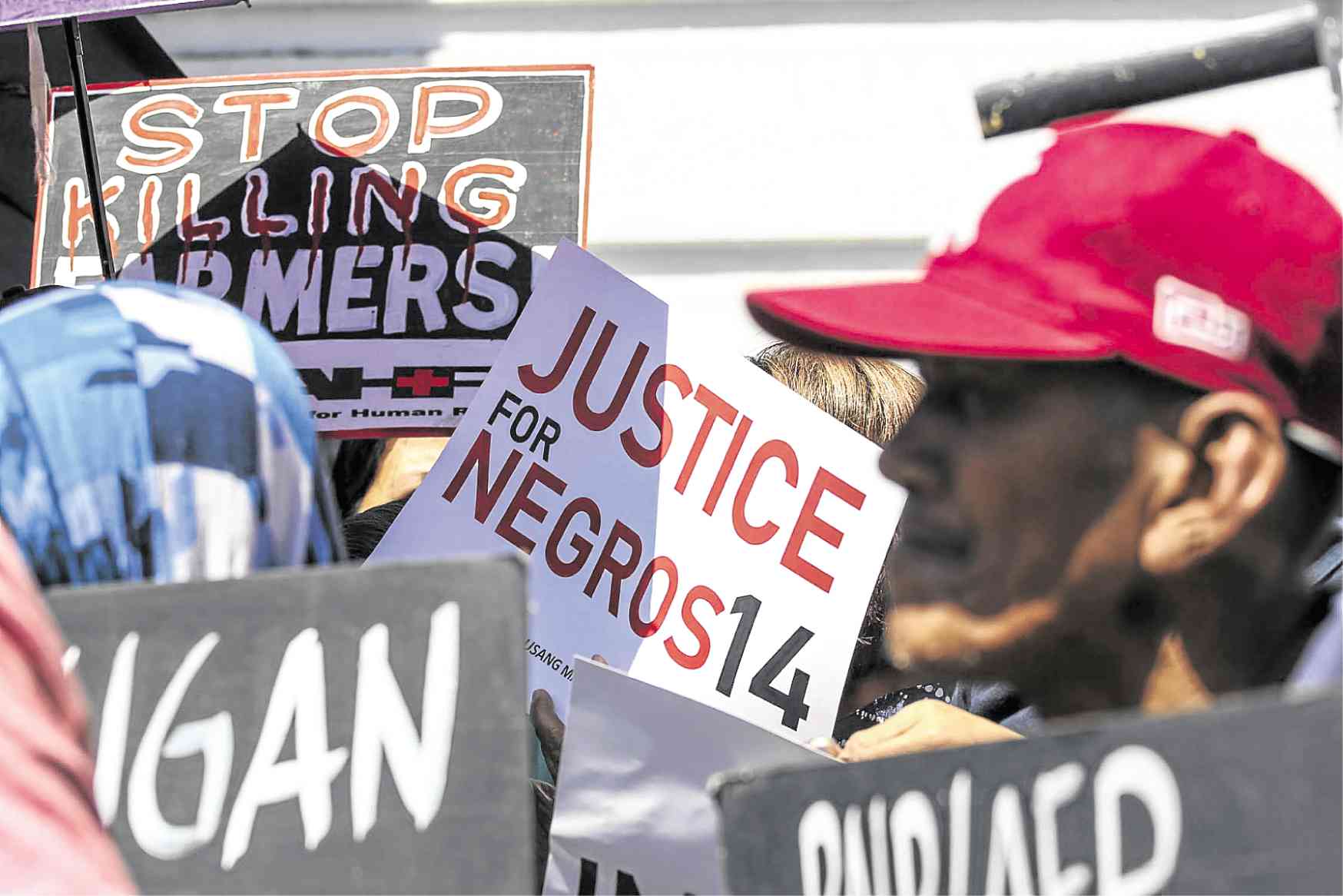 Members of the peasant group Anakpawis (right) demand justice for the slain farmers.

MANILA, Philippines — Opposition lawmakers on Wednesday demanded the dismissal of the Philippine National Police chief for the killing of 14 farmers in Negros Oriental province on Saturday and for sacking the wrong police officials in a “badly scripted attempt at damage control.”

Anakpawis Rep. Ariel Casilao, speaking at a news briefing, called for the head of Gen. Oscar Albayalde, the PNP chief, who, he said, should be held liable for the killings in Canlaon City and the towns of Manjuyod and Santa Catalina.

Gabriela Rep. Arlene Brosas agreed that Albayalde should go, but said President Rodrigo Duterte was ultimately responsible for the counterinsurgency operations that led to the killings.

“We hold President Rodrigo Duterte ultimately responsible, as the atrocities in Negros Oriental are a direct implementation of his order to shoot farmers asserting their right to land: ‘My orders to the police and the soldiers, shoot them. If they resist violently, shoot them. If they die, I do not care,’” the lawmakers said in a statement read at the briefing.

The lawmakers belonging to the opposition bloc Makabayan filed a resolution directing the House of Representatives to investigate the killings.

Citing statements from families of the victims, the lawmakers said initial investigation indicated the victims were summarily executed.

“[Civil society] groups asserted that these killings were brought about by the Synchronized Enhanced Managing Police Operation (Sempo) and Oplan Sauron, as a local counterpart implementation programs to Memorandum Circular No. 32 issued by President Rodrigo Duterte, targeting activists in Samar, Negros Island and Bicol region,” they said.

Besides Casilao and Brosas, those who filed the resolution were Representatives Carlos Isagani Zarate of Bayan Muna, Emmi de Jesus of Gabriela, Antonio Tinio and France Castro of ACT Teachers, and Sara Jane Elago of Kabataan.

Eight farmers were shot dead in Canlaon, four in Manjuyod, and two in Santa Catalina in separate, military-backed police operations that started after 1 a.m. on Saturday.

Authorities said the officers were serving search warrants for illegal firearms, but the victims fought back, a claim denied by the slain men’s families who said the men were unarmed and were shot inside their houses.

Farmers’ groups and human rights organizations have called for an independent investigation, accusing the authorities of ignoring due process and violating human rights.

Albayalde told reporters he ordered the relief of the four police officials to clear the way for an “impartial investigation” of the killings by the PNP Internal Affairs Services.

But San Carlos Bishop Gerardo Alminaza said the four police officials knew nothing about the operations that led to the killings.

“I’m surprised that they were the ones relieved [because] they didn’t even know of the plan and they were not directly involved. As far as I know, it was the regional police coming outside Negros. They [are the ones who should be] investigated and held accountable,” Alminaza said on Tuesday.

The Central Visayas regional police force is headed by Police Brig. Gen. Debold Sinas and is based in Cebu City.

Citing Alminaza’s report in a statement, Colmenares and Zarate said the relief of the four Negros Oriental police officials was intended to deflect public anger over the killings.

“What the PNP is doing now is for damage control but at the same time maligning and blaming the victims of the Negros Oriental massacre. If they did not kill the farmers in the first place, then they would not have to use such a badly written script,” Colmenares said.

Zarate said the PNP and the Armed Forces of the Philippines should release the names of all the policemen and soldiers involved in Saturday’s operations.

“If they have nothing to hide, they should face the investigation,” Zarate said.

Commenting on Alminaza’s information, Police Col. Bernard Banac, the PNP spokesperson, said the police investigation was focusing first on the involvement of the local police.

The relieved police officials “were the ones who had direct supervision in those areas,” Banac said.

The Commission on Human Rights (CHR) began to investigate the killings on Wednesday.

“Our investigation will focus on whether the [security forces] followed the rules of engagement under the operational procedures of the Philippine National Police and [the] military, and (pertinent) laws,” lawyer Arvin Odron, CHR Central Visayas director, told the Inquirer.

CHR investigators began to interview witnesses and the families of the slain farmers.

“We have received reports that what happened were tokhang-type killings,” Odron said, using the code name for police operations in President Duterte’s brutal war on drugs.

He said the reports would be verified and investigators would determine whether all the victims were killed in the same way.

Odron said he gave the investigators three days to complete the interviews and data gathering, although that period could be extended because of the difficulty of travel to the remote towns. —Reports from Pathricia Ann V. Roxas, Melvin Gascon, Jaymee T. Gamil, Nestor P. Burgos Jr. and Carla P. Gomez