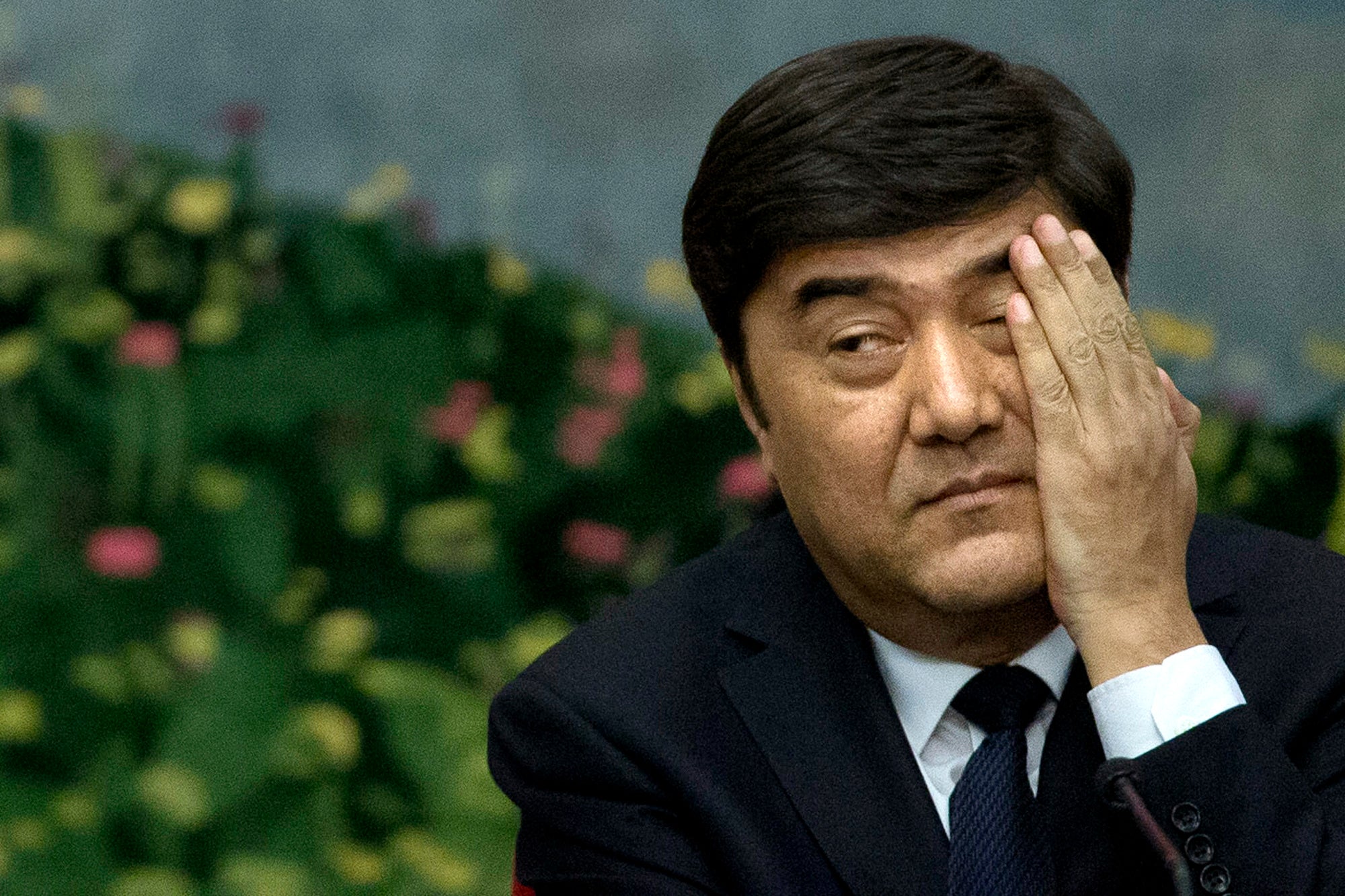 In this March 6, 2014, file photo, then China’s northwestern Xinjiang region’s Uighur governor Nur Bekri rubs his face, during the Xinjiang delegation’s group discussion session as part of the annual National People’s Congress at the Great Hall of the People in Beijing. China says the former governor of the restive Xinjiang region has been formally arrested for taking bribes. The nation’s top prosecutor said the step was taken Tuesday, April 2, 2019, after the combined Communist Party-government investigatory body had completed its work. Bekri has already been expelled from the party. (AP Photo/Alexander F. Yuan, File)

BEIJING — The former governor of the restive Xinjiang region has been formally arrested on accusations of taking bribes following a months-long investigation, the government said Wednesday, showing no letup in President Xi Jinping’s drive to bring the bureaucracy to heel.

Nur Bekri, who most recently headed the National Energy Administration planning agency, will proceed to prosecution and almost certain conviction at trial.

The nation’s top prosecutor said the step was taken Tuesday after the combined Communist Party-government investigatory body had completed its work. Bekri has already been expelled from the party, stripping him of his last protection against prosecution.

Bekri is accused of using his authority to aid others in job placement, business operations, and mineral resource development in exchange for large amounts of money and property. He allegedly abused his power by arranging free rides in luxury vehicles, special drivers, and other services for his family members, while living an “extravagant life, coveting greed.” He is also accused of not being truthful to investigators.

As governor of the vast, resource rich northwestern region of Xinjiang and in his later role, Bekri was one of the most senior officials from the predominantly Muslim Uighur (WEE’-gur) ethnic minority.

There is no indication that his arrest was connected to a sweeping security crackdown in Xinjiang, where an estimated 1 million Uighurs and Kazakhs have been incarcerated in reeducation camps.

Thousands of officials at all levels have been ensnared in Xi’s signature multi-year campaign against corruption that has brought down numerous high-profile political rivals.

Bekri became director of the National Energy Administration in 2014, and was also deputy chairman of the Cabinet’s economic planning agency, the National Development and Reform Commission. /kga