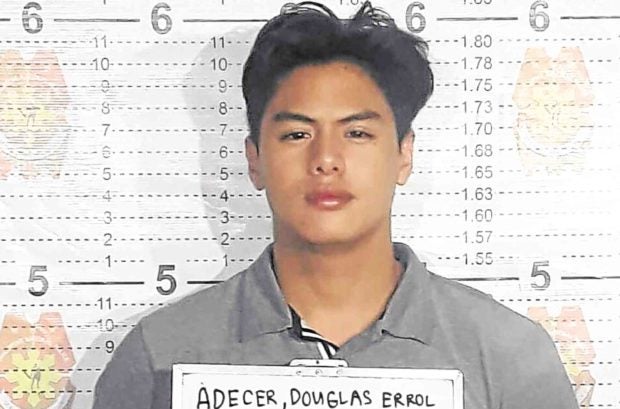 MANILA, Philippines — Actor and “Starstruck” reality show winner Migo Adecer is not yet off the hook after the Makati police charged him again, this time for presenting a fake driver’s license after he figured in a hit-and-run incident last week.

The police filed in the Makati Prosecutor’s Office on Tuesday a complaint against the 19-year-old Filipino-Australian for violation of Article 172 of the Revised Penal Code or falsification by private individuals and use of falsified documents.

“An obviously drunk” Adecer, according to the police, struck two motorcycle-riding employees of the Metropolitan Manila Development Authority with his white Subaru BR2 on J.P. Rizal Avenue in Barangay Poblacion at 6 p.m. on March 26.

Instead of stopping, he sped off until he was eventually cornered by a police vehicle 500 meters away on Nicanor Garcia (Reposo) Street.

Authorities later found out that the actor’s driving license was fake. Around half an hour earlier, he was discovered to have surrendered his real license after he was flagged down for reckless driving at the Rockwell commercial center.

A certification issued by the Land Transportation Office said that the number of the driver’s license presented by Adecer, whose real name is Douglas Errol Dreyfus Adecer, had been traced to a resident of Antipolo City.

Following his arrest, the actor was charged with disobedience to an agent of a person in authority. He was released on March 27 after he posted bail of P3,000.