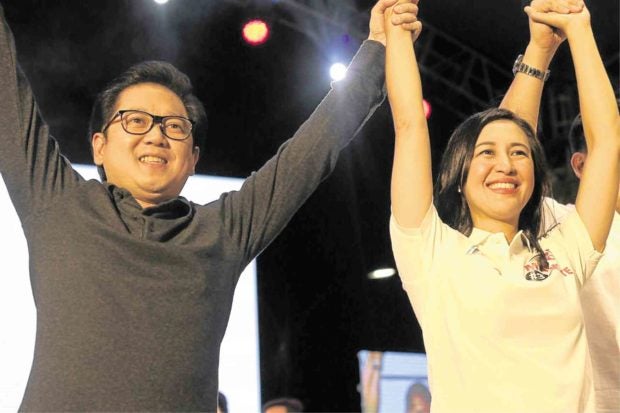 MANILA, Philippines — Unexpected but welcome was how Quezon City Vice Mayor Joy Belmonte described the appearance of Mayor Herbert “Bistek” Bautista, whom she had not spoken to in years due to a rift, at her proclamation rally last week.

“It [was] a welcome surprise and [it was] touching to receive his support,” Belmonte told the Inquirer on Tuesday.

She said that she was all set to kick off her campaign for the city’s highest post without Bautista’s support although, out of courtesy, she invited him to the proclamation rally.

“But I would have appreciated it more had he done it at a time when I needed it the most the way my entire family supported his candidacy before,” she said.

According to Belmonte, her father, former House Speaker and incumbent 4th District Rep. Feliciano “Sonny” Belmonte Jr., financed the campaign of Bautista and attended his sorties when the latter was running for mayor.

Bautista surprised his running mate of three terms when he showed up at the launching of her mayoral bid on Friday. He raised her hand and expressed support for her Serbisyo sa Bayan Party ticket.

“I was not at the mass earlier but I always pray for our next mayor, Joy Belmonte,” he told the crowd.

Bautista, who is on his last term, also praised Belmonte for taking after her mother, publisher Betty Go-Belmonte, and acknowledged her father as his mentor.

“When he raised my hand, I saw a lot of people [in] the audience cried because maybe, they were hurt [by] what happened to us and seeing us together was a relief for them,” said Belmonte.

In a forum with Inquirer editors earlier this month, she spoke about a rift with Bautista, saying they were “not on speaking terms.”

The root of their conflict, Belmonte said then, might be attributed to their different leadership styles.

“Maybe [Bautista] was used to seeing a rubber stamp politician who would just follow orders or sign documents without questions, but I’m not a rubber stamp vice mayor,” she explained.

“But on stage, the mayor said, ‘I finally understood why the vice mayor was very strict. The vice mayor was just trying to protect me.’ I thought he would never understand [my actions],” she said.

Their team will be pitted against Rep. Vincent “Bingbong” Crisologo and his running mate, lawyer Jopet Sison, as well as the tandem of former Rep. Chuck Mathay III and Councilor Roderick Paulate.