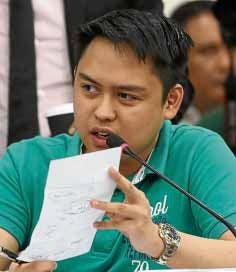 MANILA, Philippines — Alleged fixer Mark Taguba has filed an appeal in court to reverse an earlier ruling denying him bail as he pointed to his Chinese coaccused, Richard Tan and Chen Rong Huan, as the ones who knew about the 602.2 kilograms of “shabu” (crystal meth) from China that passed through the Bureau of Customs’ express lane.

His omnibus motion was filed on March 28 after Judge Rainelda Estacio-Montesa of the Manila Regional Trial Court Branch 46 junked the petition for bail he filed along with another coaccused, Eileen Marie Tatad, on March 11.

A separate bail petition filed by Kenneth Dong has yet to be heard by the court.

Taguba, Tatad, Tan, Chen and Dong are among the 12 individuals facing charges of drug importation and transportation in connection with the P6.4-billion shabu shipment that slipped past customs officials in 2017.

Through legal counsel Raymond Fortun, Taguba asked why state prosecutors failed to also indict Customs officials, saying “the shipment could not have been possible [without their] indispensable participation.”

“To successfully impute conspiracy, then all the individuals who played a significant role in the importation should have been indicted and tried. Why did the panel choose to charge only the individuals and let all the government employees off the hook?” he said.

“The only thing that [the prosecution] was able to prove was that the drug shipment indeed landed on Philippine shores and reached its destination, the Hong Fei warehouse owned by [Richard Tan, one of the accused],” Taguba added.

The testimony of the prosecution’s own witness, Jean Tan, also proved that he and broker Teejay Marcellana never saw or dealt with the packing list of the five cylinders that contained the drugs, Taguba said.

During the trial, Jean Tan testified that the list was prepared by Chen and came from China.