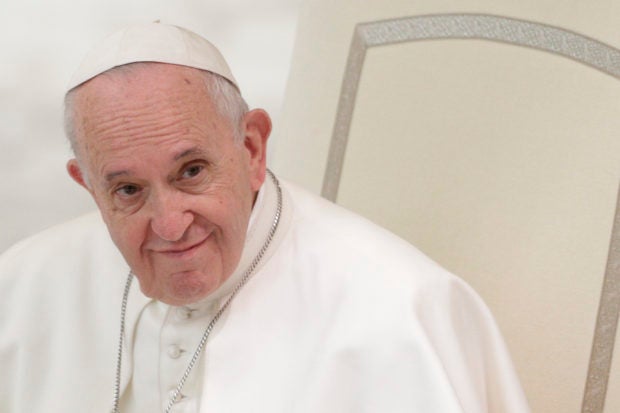 FILE – In this Friday, March 29, 2019 file photo, Pope Francis attends an audience with participants of a course on the Internal Forum promoted by the Apostolic Penitentiary Court, in the Pope Paul VI hall, at the Vatican. Pope Francis said on Tuesday April 2, 2019, women have “legitimate claims” to seek more justice and equality in the Catholic Church, but has stopped short of endorsing more sweeping calls from his own bishops to give women decision-making roles. (AP Photo/Andrew Medichini, File)

VATICAN CITY  — Pope Francis said Tuesday that women have “legitimate claims” to seek more justice and equality in the Catholic Church, but stopped short of endorsing more sweeping calls from his own bishops to recognize the “urgency of an inevitable change” to give them leadership roles.

Francis issued a document inspired by an October 2018 meeting of the world’s bishops on better ministering to today’s young Catholics. The meeting was marked by demands for greater women’s rights, and the bishops’ final document called the need for women to have positions of responsibility and decision-making in the church “a duty of justice.”

In his lengthy document, “Christ is alive,” Francis endorses no such conclusion. He says only that a church that listens to young people must be attentive to women’s “legitimate claims” for equality and justice, and must better train men and women who have leadership potential.

“A living church can look back on history and acknowledge a fair share of male authoritarianism, domination, various forms of enslavement, abuse and sexist violence,” Francis writes.

“With this outlook, she can support the call to respect women’s rights, and offer convinced support for greater reciprocity between males and females, while not agreeing with everything some feminist groups propose.”

Asked at a news conference Tuesday about the lack of reference to both women in leadership positions and the need to welcome homosexuals better, synod organizer Cardinal Lorenzo Baldisseri noted that Francis acknowledged in his text that he couldn’t rewrite everything from the final synod document and referred readers back to it.

Francis writes that he was inspired by all the reflections at the synod but that he wanted to use his text to “summarize those proposals I considered most significant.”

The document, known as an apostolic exhortation, covers a wide range of issues confronting young people today, noting that many feel alienated from the Catholic Church because of its sexual and financial scandals, and are themselves suffering from untold forms of exploitation, conflict and despair.

A hefty chunk of the document focuses on both the promises and perils of the digital world and dedicates ample space to the plight of migrants. It uses millennial lingo, calling the Virgin Mary an “influencer” and describing relations with God in computing terms: “hard disk,” ”archive” and “deleting.”

The document calls for an urgent reform of Catholic schools and youth ministry programs, saying they are often focused on self-preservation and protecting the young from outside errors, and are divorced from the reality of the lives lived by the young.

“Such a youth ministry ends up completely removed from the world of young people and suited only to an elite Christian youth that sees itself as different, while living in an empty and unproductive isolation,” he writes.

It also acknowledges the importance of sexuality to young people as part of their development. But it uses the term “homosexuality” only once in the entire 299-paragraph booklet, and doesn’t repeat the language of the October 2018 synod final document calling for deeper anthropological, theological and pastoral study on sexuality and sexual inclinations.

On sexual abuse, the pope calls for the “eradication” of the way authority has been exercised in the church that allowed such abuses to occur, and for a challenge to the way church leaders handled cases with “irresponsibility and lack of transparency.”

“The desire to dominate, lack of dialogue and transparency, forms of double life, spiritual emptiness, as well as psychological weaknesses, are the terrain on which corruption thrives,” Francis writes.

He calls for the faithful to call out a priest who seems at risk of seeking affections from young people “and remind him of his commitment to God and his people.”

Asked why there was no reference to Francis’ frequent call for “zero tolerance” for abuse, Baldisseri said the pope doesn’t need to repeat the phrase in every document. “You don’t need to say ‘zero tolerance’ every time you go to lunch and dinner,” he said.

The issue of women was particularly acute during the synod, given that only seven nuns were invited to participate alongside 267 cardinals, bishops and priests. None of the women had the right to vote on the final document, and the nuns made clear and public their displeasure before, during and after the meeting.

While reference to the gender disparity at future synods was scrapped, the final document did recommend that women have a greater presence in church structures at all levels, including positions of responsibility, while respecting that the priesthood remains for men only.

“The synod recommends that everyone be made aware of the urgency of an inescapable change,” it said. “It’s a duty of justice, that finds its inspiration in the way Jesus related to the men and women of his time, as well as the importance of the role of some female figures in the Bible, in the history of salvation and in the life of the church,” the document read.

Church doctrine reserves the priesthood for men, given Christ’s apostles were male. Women have often complained they have a second-class status in the church. History’s first Latin American pope has vowed to change that, but he has done little concrete and counts no women among his own advisers.

Just last week, the founder of the Vatican’s women’s magazine resigned with members of the editorial board, citing what she said was a climate of distrust and delegitimization in the Vatican. The editor of the newspaper that distributes the magazine denied an effort to undermine them. / gsg