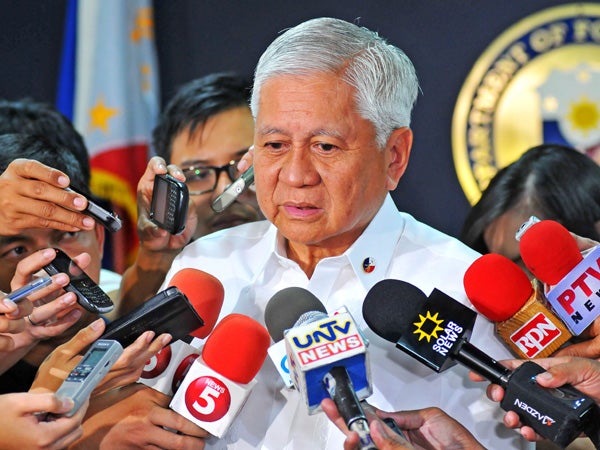 MANILA, Philippines — Former Foreign Affairs Secretary Albert del Rosario on Tuesday asserted that the administration of President Benigno S. Aquino III did everything it can to achieve “a peaceful conclusion” to the South China Sea dispute.

Del Rosario said the Aquino administration undertook “more bilateral consultations with (China) than any other administration” and “protested more times than anybody else.”

The ex-top diplomat of the government rejected allegations that the Aquino administration’s negligence led to China’s aggressive building of artificial islands in the disputed waters.

“We undertook the necessary, every possible means to come to a peaceful conclusion to this problem,” Del Rosario said in an interview over ABS-CBN News Channel when told that some groups accuse the Aquino administration of not acting enough to prevent China’s building of structures in the West Philippine Sea.

“We wanted a durable peaceful solution to emanate from this. It did not happen,” he added.

Del Rosario underscored China’s “very clear expansion agenda” that was based on its “unlawful premise” that it had sovereignty over the entire South China Sea.

China’s strategy, he noted, involved “salami slicing” wherein it did things “slowly and illegally so that nobody notices and if they notice, it’s not an infraction big enough for anybody to get excited about.”

This approach, he also said, enabled China to seize control over contested areas in the South China Sea.

Del Rosario said that when the Aquino administration noticed this shady salami slicing scheme, they immediately called for bilateral talks with China.

“We also noted that we protested more times than anybody else in out of these bilaterals,” he also said.

When the numerous bilateral talks apparently failed, Del Rosario said the Aquino administration had no choice but to put together a “legal track,” causing the Philippines’ filing of a complaint against China before the Permanent Court of Arbitration (PCA) in The Hague, Netherlands.

PCA is an intergovernmental organization providing a variety of dispute resolution between states.

The Philippines questioned the legality of China’s “nine-dash line,” which virtually covers most of the South China Sea, including areas that other Asian nations also claim.

In 2016, the arbitral tribunal ruled in favor of the Philippines. It invalidated China’s nine-dash line and affirmed the Philippines exclusive sovereign rights over the West Philippine Sea (in the South China Sea). /kga

The heart of the dispute over the West PH Sea

Read Next
Commander in Cheat? New book recounts golf misdeeds by Trump
EDITORS' PICK
Water remains our saving grace right now
How Filipinos are embracing digital technology amid the coronavirus pandemic
Defend Your Health! Shop health essentials from home with Rose Pharmacy’s Online Sale
Duterte exults: Oligarchy ended without martial law
Like death and taxes, ‘elites we will always have with us’ – national scientist
Palace: No house-to-house search for COVID-19 patients
MOST READ
DPWH Secretary Villar tests positive for COVID-19
Duterte sets off fresh tirades vs ABS-CBN after network lost franchise bid
Palace: No house-to-house search for COVID-19 patients
Military agents shot in the back – DOJ
Don't miss out on the latest news and information.