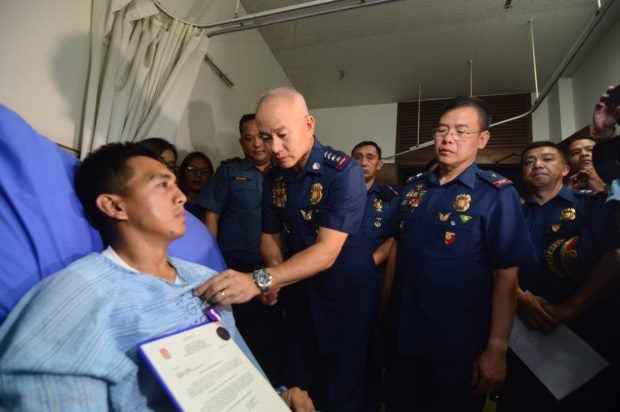 Philippine National Police Chief Gen. Oscar Albayalde confers the Wounded Personnel Medal to Corporal Irpeel Lapniten who was wounded in the New People’s Army attack in Mountain Province on Friday. Another cop, Patrolman Wilfredo Padawil, was killed in the clash and was given a posthumous medal and promotion. Karlston Lapniten

LA TRINIDAD, Benguet, Philippines—Patrolman Wilfredo Padawil, who was killed during an encounter with the New People’s Army, was laid to rest in his hometown in Mountain Province on Saturday.

Buried with him was his dream of marrying this year his girlfriend, also a police officer, and raise a family.

Padawil’s fellow policemen from the Regional Mobile Force Battalion in Cordillera recalled how he openly talked about his marriage plans.

An NPA sniper ended Padawil’s life and dreams. He was 25.

Padawil was buried according to the customary traditions in Tetep-an village, Sagada, which is around 10 kilometers from where he was killed.

A criminology degree graduate, it was Padawil’s aspiration to be a police officer, according to his sister Wilma Dumaguing.

“(He) fought hard for the country, (and) for the people. We will continue his dream for our family,” she said.

A posthumous medal and promotion was also conferred to Padawil.

Padawil’s company engaged in a 15-minute firefight with around 20 NPA combatants on Friday when the NPA was marking its 50th anniversary.

The policemen conducted Internal Security Operations in Bauko, Mountain Province following intelligence reports of the presence of the communist group in the area.

During the gun battle, Corporal Irpeel Lapniten, 31, was also hit in the left shoulder but survived. Lapniten and Padawil were holed just a few meters apart.

“It’s a mixed emotion of sadness seeing a buddy fall and die, but grateful for surviving,” Lapniten told journalists here.

Albayalde, who was recently here for a command conference, pinned the Wounded Personnel Medal to Lapniten and gave him cash assistance.

Lapniten is recuperating at the Benguet General Hospital.