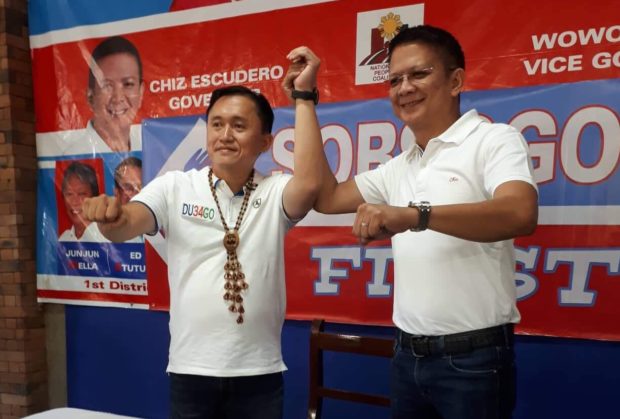 Sen. Chiz Escudero, who is running for governor of Sorsogon, raises the hand of senatorial candidate Bong Go at a political sortie in Sorsogon Sunday. Photo by Michael Jaucian / Inquirer Southern Luzon

SORSOGON CITY, Philippines — Senator Francis Escudero, who is running for governor of Sorsogon province in the coming May elections, formally endorsed former Special Assistant to President Duterte Bong Go during his visit here on Sunday.

“It’s more than an honor for me to be endorsed by Senator Escudero who is well known for (being an) official maker,” Go said, hinting at Escudero’s alleged luck in endorsing candidates who win later on.

Once elected he said “I would serve as bridge in bringing the people closer to government.”

He said he will also put a Malasakit Center in Sorsogon.

Asked for a statement on his positive standing in election surveys, he said “I’m very thankful but need to work harder to maintain the good result (seen in the) survey.”

He said if elected, Sorsogon will benefit from the Duterte administration’s Build, Build, Build projects in order to end the insurgency problem here.

Meanwhile, Escudero said “ever since Sorsogon has been benefitting from infra projects but it would be more beneficial if there would be more farm to market roads to improve the people’s quality of life.”

“…at kapag gumanda ang buhay ng tao siguradong magandang kalalabasan ng peace and order sa bansa (and if the lives of people improve, it would sure bring improvement to the peace and order in the country),” he added.

Read Next
Politician’s claim as tallest might be a stretch
EDITORS' PICK
Lawmakers eyeing more changes in Maharlika plan
How not to retire as an ex-president
Hidilyn Diaz wins only gold missing from her collection
Shop smarter with vivo’s big 12.12 holiday deals
The vivo Y02 is now available in the Philippines for only PHP 5,299
House energy committee chair Arroyo bats for cheap electricity
MOST READ
Jovit Baldivino, ‘Pilipinas Got Talent’ winner, dies at 29
LPA enters PAR, to likely strengthen into tropical depression in coming days – Pagasa
Andi Eigenmann, family in Manila for a quick visit; Ellie dines with grandma Jaclyn Jose
11 Filipino imports named to Japan B.League Asian All-Star team
Don't miss out on the latest news and information.