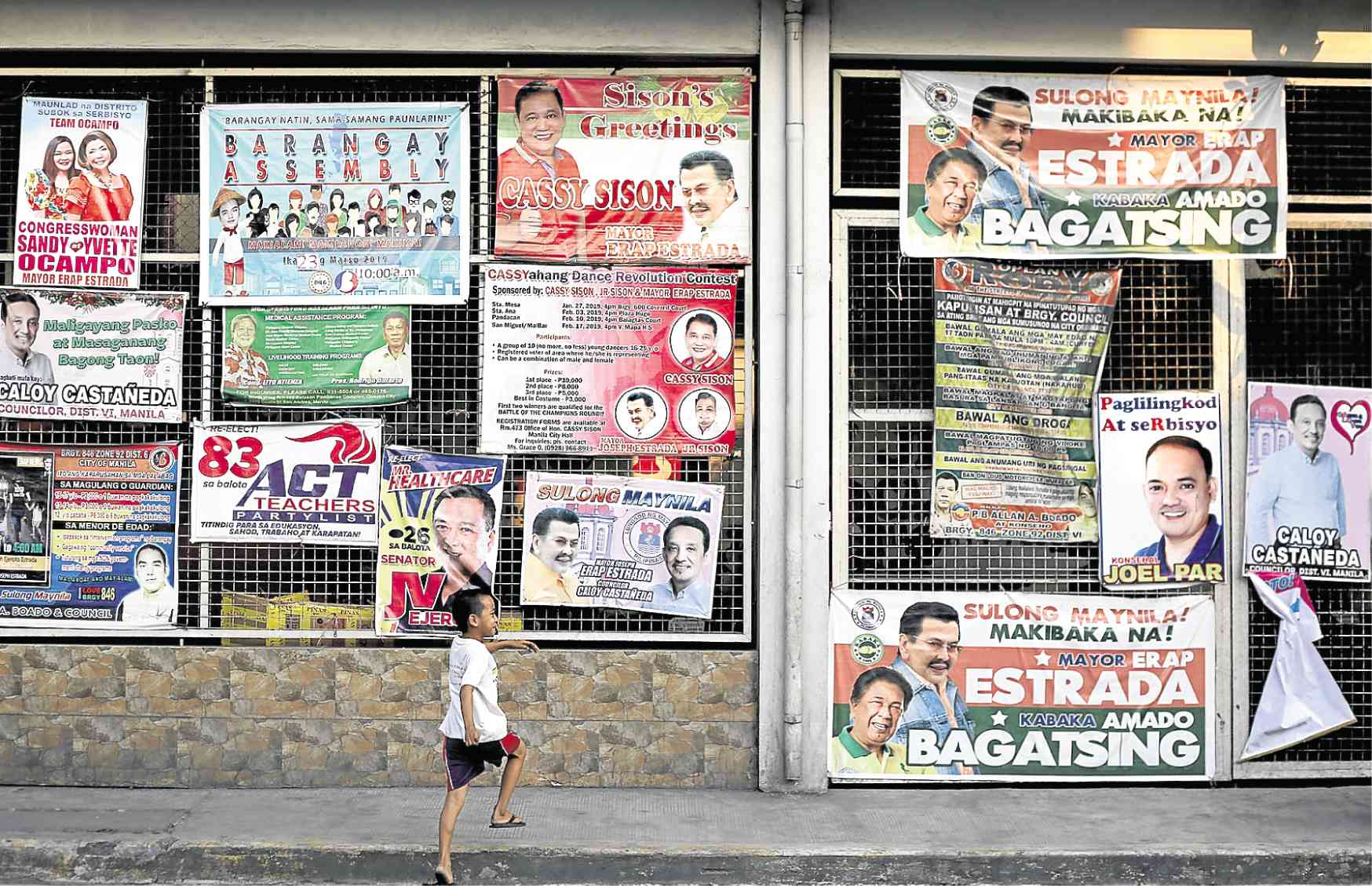 CHOICES Like the Filipino voter, this kid in Manila is marching into a future to be shaped by the choices that the nation will make in the May 13 midterm elections. —RICHARD A. REYES

MANILA, Philippines – As the official campaign period for the local polls opens on Friday, the perennial issues of poverty and the lack of social services will confront candidates, who will be questioned about their honesty, integrity, competence and track record, according to analysts and observers.

In Eastern Visayas where poverty is high, voters want their candidates to tell them how jobs can be generated so the people won’t have to depend on government for their livelihood.

In Bohol, which depends to a large extent on tourism, climate change and environmental protection are of paramount concern.

While poverty and corruption remain the most pressing problems in Iloilo province, many voters are also concerned about extrajudicial killings.

Michael Cañares, a senior research manager for Digital Citizenship at the Web Foundation, said how candidates would give importance to environmental issues in their platforms would be critical in the election.

“Will the local leaders betray the environment this time and pursue development projects at the expense of environmental destruction?” said Cañares, who has more than 10 years of research and development work experience in community-based project management and regional development in Southeast Asia.

He noted that the income from tourism had not trickled down to the poor, especially the farmers and the fishermen.

Lydia Morante, head of the Graduates School of the Eastern Visayas State University in Tacloban City, said sustainable livelihood programs would be a key issue in the election in the region.

“The citizens should have work. Build factories, industries that will provide continued work that they become self-reliant,” she said.

Eastern Visayas, composed of the provinces of Leyte, Southern Leyte, Biliran, Samar, Eastern Samar and Northern Samar, had a poverty incidence of 30.7 percent, which made it the third poorest region in the country in 2015.

For Ilonggos, extrajudicial killings of mostly drug suspects are adding to the pressing issues of poverty and corruption in the province, according to Msgr. Meliton Oso, Iloilo coordinator for the Parish Pastoral Council for Responsible Voting.

He said voters are looking for leaders who will deal with their economic problems and who are not corrupt, “but they also want to know who among the candidates can address the killings.”

Voters and residents in Albay and Quezon provinces said the honesty and integrity of candidates and their track record were as important as their programs of government.

“First and foremost is honesty and integrity,” said Dominador Barrameda, a former government prosecutor and a law professor in Legazpi City.

Rolly Esguerra, a retired police colonel in Albay, said people “need genuine leaders who can address our concerns” no matter how small.

Freelance writer Merlita Tariman said a candidate should present a clear vision and what he wanted to accomplish at the end of his three-year term.

“He should possess management savvy. Whether he wants to be an executive or a legislator, he must show a reliable amount of capacity to serve the people with an eye for good management,” she added.

Lilibeth Azores, a native of Quezon and SM senior public relations manager, said voters should focus on the honesty and track record of a candidate.

“If the poll bets have no worthy record of accomplishment during his term, why will he/she be entitled (to) another term?” Azores said.

She said the governor, as chief executive, should be committed to investing more on education and upgrading public schools by providing facilities and competent teachers all over the province.

In Davao City, President Duterte’s bailiwick, local political candidates should tackle the administration’s antidrug campaign and tell the people whether they view it simply as a law enforcement or a public health problem, said Mags Maglana, one of the convenors of the antimartial law group Konsensya Dabaw.

She said the there was “growing discomfort” among Davaoeños regarding extrajudicial killings that victimized ordinary people while those close to the President who have been linked to the illegal drug trade, particularly his former economic adviser, Michael Yang, remained untouched.

For the people of Zamboanga City, the growing problem of water and electricity supply has become a major election issue.

“Those who should be elected should have some degree of intelligence. Unfortunately … they don’t have a heart, only deep pockets,” Rivera said.

Iloilo’s Monsignor Oso said that while many voters were conscious and concerned about the election issues, it was doubtful if they would elect candidates based on those concerns.

“It is still mainly a popularity contest. We hope and pray to address this but we can only do so much amid the prevalent culture,” he said. —WITH REPORTS FROM NESTOR P. BURGOS JR., CARLA P. GOMEZ, JOEY A. GABIETA, LEO UDTOHAN, DELFIN T. MALLARI JR., MAR S. ARGUELLES, MADONNA T. VIROLA, MART SAMBALUD, JULIE ALIPALA, JIGGER JERUSALEM AND ORLANDO DINOY