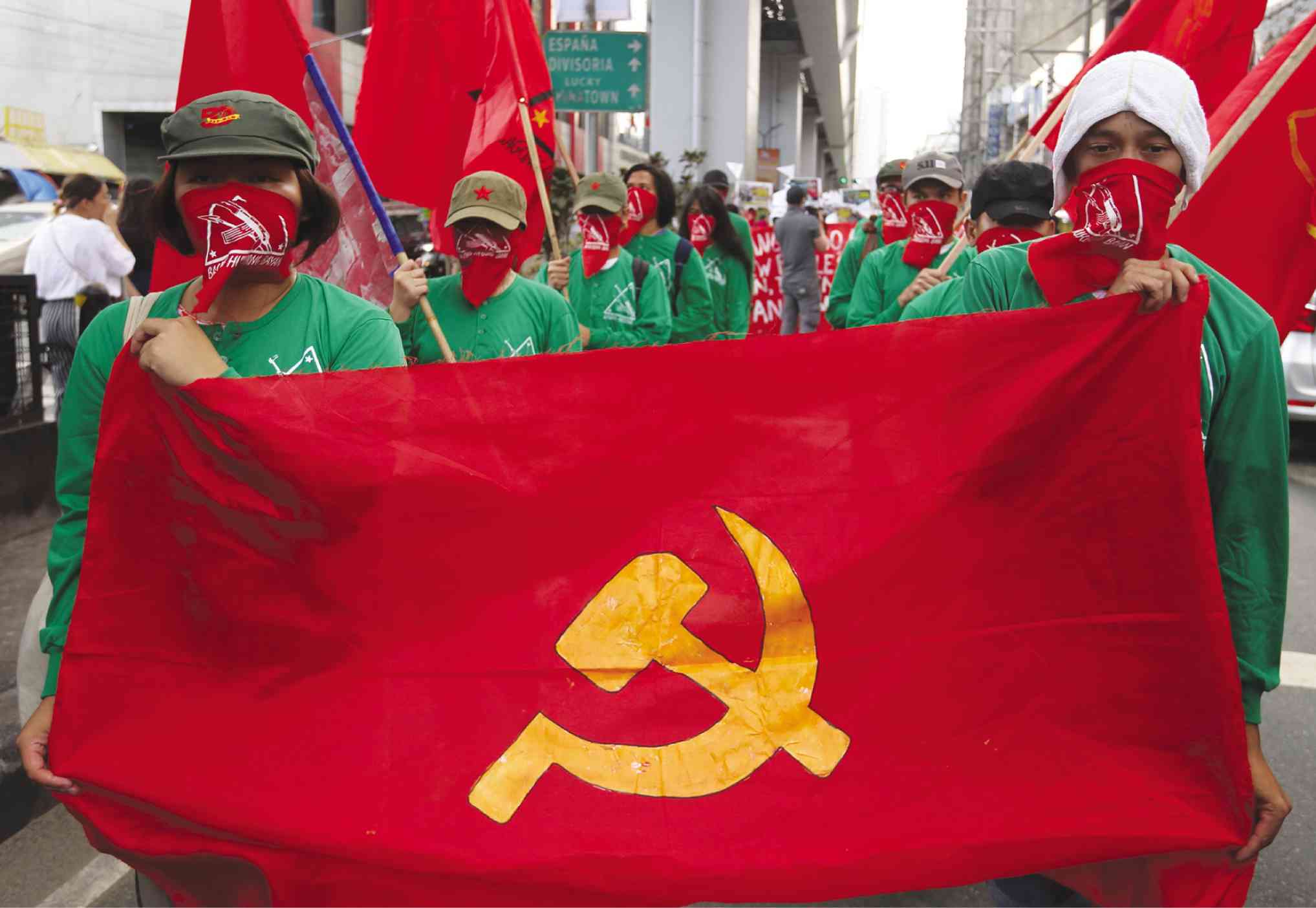 SEEING RED Students belonging to left-leaning groups join a lightning rally in Manila to commemorate the 50th founding anniversary of the New People’s Army and call on the youth to join the rebel movement. —EDWIN BACASMAS

CITY OF SAN FERNANDO — Two local governments in Central Luzon have declared the leaders and members of the Communist Party of the Philippines (CPP) and its armed wing, the New People’s Army (NPA), as persona non grata (unwelcome person), the first to do so in the region.

Doña Remedios Trinidad (DRT) town in Bulacan province made the declaration through a resolution on March 19 and Carranglan town in Nueva Ecija province on March 25.

In separate statements, the military’s 48th and 84th Infantry Battalions (IB) said they had prodded the local governments and the municipal peace and order councils to make the declarations.

Lt. Col. Felix Emeterio Valdez, acting commander of 48th IB, said the resolution complied with a memorandum circular of the Department of the Interior and Local Government that prohibited support for communists and left-wing groups.

An executive order, on the other hand, institutionalizes the “whole-of-nation approach in attaining inclusive and sustainable peace, creating a national task force to end local communist armed conflict and directing the adoption of a national peace framework.”

“[The] whole-of-nation approach marks the start of a new campaign to end the insurgency, and those who religiously practice this approach give the people a chance to have better and more peaceful lives,” Maj. Gen. Lenard Agustin, 7th Infantry Division commander, said.

According to Valdez, the persona non grata declaration means that DRT and Carranglan are “ready to embrace the lasting peace for sustainable development in the years to come.”

Recently, President Duterte ended the peace talks with the National Democratic Front of the Philippines and CPP. Mr. Duterte said he had “surrendered” engaging communist rebels in peace negotiations, claiming that it was “really useless.”

The NPA, founded in 1969 in Central Luzon, has been reportedly dissipated when then Maj. Gen. Jovito Palparan Jr. commanded the Army in the region and stepped up his anticommunist campaign that included attacks on left-leaning legal organizations.

In February, Armed Forces chief of staff, Gen. Benjamin Madrigal Jr., ordered his men to monitor the activities of NPA rebels, especially during the campaign period for the May 13 elections.

The rebels are known to demand money from candidates who want to campaign in their areas of operation.

Madrigal said the troops should “be on the lookout for extortionists,” noting the NPA rebels had earlier been declared persona non grata in some places like Compostela Valley and eastern Mindanao.

“Definitely, they can no longer extort in these places,” he said.