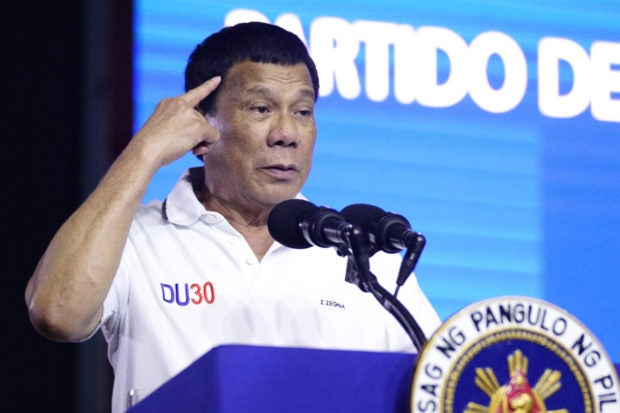 MANILA, Philippines — Presidential spokesperson Salvador Panelo on Wednesday wished for President Rodrigo Duterte a “sound mind” and a “healthy body” on his 74th birthday, which he would be celebrating on Thursday “quietly” with his family in his hometown, Davao City.

READ: Duterte on 74th birthday: I just want to stay at home and sleep

“As Mayor Duterte celebrates his 74th birthday, we pray the Almighty to continue giving him a sound mind and a healthy body, that he may finish the goals he had set for the betterment of the country and people that he loved so well towards a future of progress and prosperity,” Panelo said.

Panelo called the President “mayor” as that is the title with which he would want to be addressed.

Panelo, who is also chief presidential legal counsel, touted the Chief Executive’s dedication as “captain of our ship steering our flag carrier safely to a land he vowed to be free from drugs and crimes where each Filipino will enjoy a comfortable life.”

The Palace official also praised the President’s crackdown on illegal drugs and corruption.

“From a local public servant, he had evolved to be a force with national constituency catapulting him to the zenith of political power as the Chief Executive and Head of State,” Panelo said. “His sense of duty and fidelity to the country not only inspires and motivates workers in the government to serve the people well but moves the rest of society to march in cadence with him as he breathes life to the winds of change he has spurred.” /atm