Deal, no-deal, delay or no Brexit? The endgame 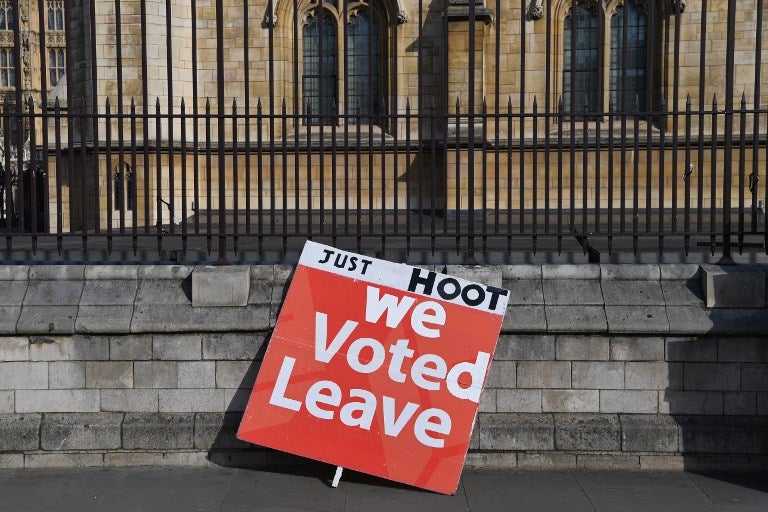 A pro-Brexit placard is propped up against a wall outside the Houses of Parliament in London on March 25, 2019. AFP

LONDON, United Kingdom – After EU leaders approved a reset of the Brexit timetable, Britain is left with four possible courses ahead of an all-important parliamentary vote on the divorce deal expected next week.

Here is how the Brexit endgame could play out:

Leave with deal on May 22

A new vote on the agreement, which allows for a long transition period and time for trade ties to be negotiated, was expected next week but Prime Minister Theresa May warned lawmakers Friday this would only happen if there were signs of “sufficient support”.

If MPs overcome numerous objections from “Brexiteers” and “Remainers” and approve the deal, Britain will leave the European Union on May 22.

In EU talks in Brussels on Thursday, French President Emmanuel Macron estimated the probability of MPs approving the deal at just five percent, according to a European source.

According to some reports, May could try to get her deal over the line by offering to resign if MPs approve it, which could win over some Brexit hardliners.

This would trigger a Conservative Party leadership contest whose winner would become the new prime minister.

If MPs reject the deal for a third time, or no vote is held, the default option would be that Britain leaves without a deal.

According to a European official that hard deadline would be midnight Brussels time on April 12 but Macron said this was not “necessarily” the case and a later date for no-deal Brexit could be agreed.

May has not ruled out the possibility of a no-deal.

Some commentators say her position has hardened this week and she could be prepared to go through with it despite a potentially heavy economic fallout.

Britain could also ask EU leaders for another, much longer delay by April 12 that would mean it would have to hold European Parliament elections at the end of May.

The European Commission, the EU’s executive arm, has advised EU leaders that this longer extension should be at least until the end of 2019 and possibly much longer to allow for a proper change in Brexit strategy.

The longer delay would allow time for a change in prime minister if the growing list of May’s opponents in the Conservative Party manage to force her out.

It would also open up other options such as holding a general election or, perhaps, a second referendum.

Britain’s Electoral Commission has budgeted for European elections and could hold them at short notice but May has said it would be “unacceptable”.

“I don’t believe it’s right to be in a situation of holding European parliamentary elections three years on from people having voted to leave the EU,” she said.

This is by far the least likely option but is still one of the possibilities mentioned by EU President Donald Tusk in his remarks after Thursday’s summit.

An estimated one million people flooded London on Saturday calling for a second referendum on EU membership while an online petition started Wednesday asking the government to end the Brexit process has garnered more than four million signatures so far.

The European Court of Justice has ruled that Britain could unilaterally revoke its Article 50 notification — the formal procedure for leaving the EU.

House of Lords member John Kerr, who helped draw up Article 50, said a revocation “isn’t politically doable” without a general election or referendum.

May has also ruled this option out, telling reporters: “I do not believe we should be revoking Article 50.” /cbb

TAGS: deal, delay or no Brexit? The endgame, no deal