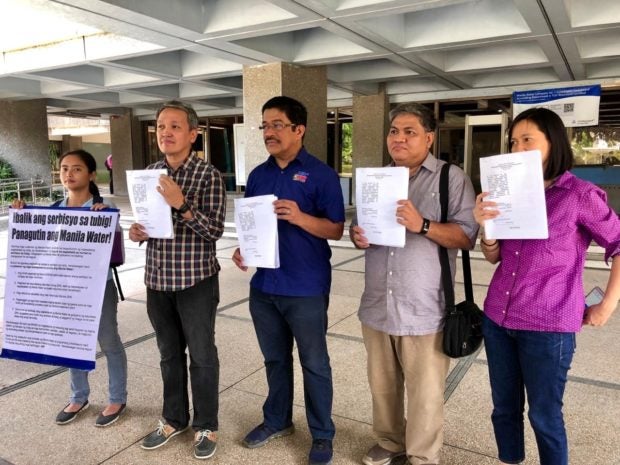 CONSUMERS’ DEMAND Bayan Muna Rep. Carlos Zarate (center) and other Manila Water customers demand a refund from the concessionaire in a petition they filed on Monday at the Metropolitan Waterworks and Sewerage System office in Quezon City. —MATTHEW REYSIO-CRUZ

MANILA, Philippines — Several customers of Manila Water Co. led by a party-list lawmaker petitioned the Metropolitan Waterworks and Sewerage System (MWSS) Regulatory Office on Monday to penalize the company for breach of contract for the water shortage in large areas of Metro Manila and parts of Rizal province early this month.

They argued that penalties were warranted because Manila Water had failed to adhere to Section 5.1.2 of its concession agreement with the MWSS requiring it to ensure continuous water supply to all its customers.

The group asked the regulator to order Manila Water to refund customers for the “unexpected, emergency purchase of incidentals,” such as water drums and pails, waive the P83.14 minimum charge for consumers who experienced service interruptions, and provide a rebate to cover “forgone revenue or earnings” caused by the shortages.

It also urged the MWSS to revisit the approved rate increase and suspend its implementation until it had conducted a “thorough performance review of Manila Water.” The rate increase covers the current five-year regulatory period that lasts until 2022.

“Allowing [Manila Water] to continue charging customers at the new approved rates, over the next five years, is tantamount to rewarding inefficiency, mismanagement, if not untruthfulness to the public,” the petitioners said.

Patrick Ty, chief regulator of the MWSS, said he would study the complaint, but pointed out that the process of seeking accountability for the water shortages in the east zone had already been set in motion weeks ago.

“I’ve already signed a notice to explain to Manila Water for them to explain why they should not be penalized based on the terms of the concession agreement,” Ty said.

Manila Water has five days to respond to the notice issued by the regulatory office.

The water shortage stems from the concessionaire’s failure to solve the water supply deficit of 150 million liters per day, as demand has outstripped supply.

In contrast, customers of Maynilad Water Services Inc., the concessionaire in the west zone, did not suffer any water shortage, as the company was able to tap other sources, like its plant in Muntinlupa City that filters water from Laguna Lake.

The west zone covers other areas in Metro Manila and parts of Cavite province.

Manila Water said supply had been returning to most of the areas and that it was looking for ways to restore it to its regular schedule.

Ty said that when it came to the issue of refunding customers and refraining from collecting their monthly bill, he would apply “moral pressure” on the concessionaire in a meeting the two were scheduled to have later on Monday.

He added, however, that a decision on whether to penalize Manila Water would likely be reached in June or July.

But the petitioners demanded immediate action. “Manila Water has admitted it was their fault, but it seems like our regulators are still waiting on the moon to shine before acting,” Zarate said.

“That is why we as consumers took it upon ourselves to push this issue of accountability,” he said.

Ty, who had yet to read the petition, tried to modulate expectations.

“We are bound by the concession agreement,” he said. “The authority of the office is a bit limited.”

Zarate said the MWSS would be remiss in its duties if it waited until June to render its verdict.

Reyes called for greater public participation in determining the penalties by asking the MWSS to hold public hearings in every affected city.

“This is necessary to determine how households, businesses and government offices were severely affected by the water crisis,” he said.

On Monday, Sen. Grace Poe urged Manila Water to implement a “fair and just” bill reduction for its customers who suffered from its inadequate water supply in the previous weeks, describing it as the best form of apology.

“Manila Water can absorb it. Their income will not dry up. It is a drop in their bucket of profits. An apology is best expressed monetarily,” Poe said in a statement. —WITH A REPORT FROM LEILA B. SALAVERRIA