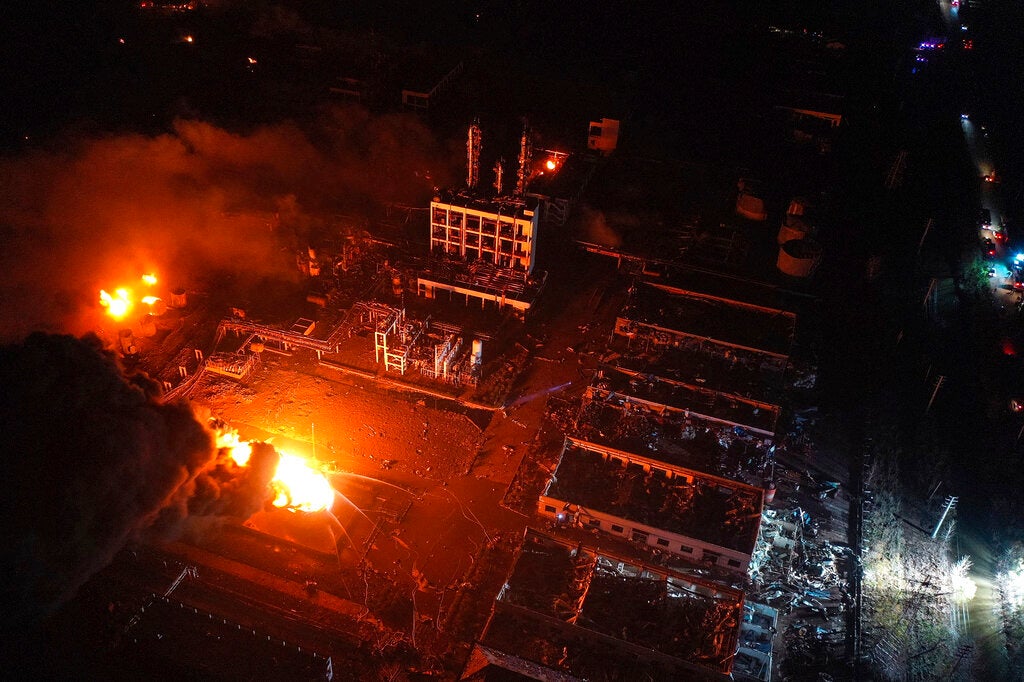 In this Thursday, March 21, 2019, aerial photo released by China’s Xinhua News Agency, fires burn at the site of a factory explosion in a chemical industrial park in Xiangshui County of Yancheng in eastern China’s Jiangsu province. The local government reports the death toll in an explosion at a chemical plant in eastern China has risen with dozens killed and more seriously injured. (Ji Chunpeng/Xinhua via AP)

BEIJING, China — The death toll in a chemical plant explosion in China rose to 64 Saturday but rescuers found a survivor among more than two dozen still missing in the debris of one of the country’s worst industrial accidents in recent years.

Thursday’s explosion in the eastern city of Yancheng injured hundreds and flattened an industrial park.

The local fire brigade pulled a man in his 40s from the rubble of the destroyed chemical plant around dawn on Saturday, according to a statement on the city government’s official Weibo account.

He was taken to hospital for treatment, the statement said, without giving further detail of his status or injuries.

“The identities of the dead and the missing are being confirmed through interviews with family members, home visits and DNA tests,” Cao told CCTV.

The explosion toppled several buildings in the industrial park and caused a huge fire that raged through the night, while rescuers scrambled to find survivors in the plant’s wreckage.

More than 600 people have received medical treatment following the blast, according to the city government.

Among them, 34 are critically injured and 60 are seriously injured, according to CCTV, which also said 28 people were still missing.

Hundreds of rescuers were dispatched to the scene, local authorities said, and some 4,000 people have been evacuated from the blast site.

Local authorities investigating the cause of the accident said an unspecified number of people were taken into police custody on Friday.

The facility involved in the explosion belonged to Tianjiayi Chemical, a firm with 195 employees established in 2007 that mainly produces raw chemical materials including anisole, a highly flammable compound.

Tianjiayi Chemical has a history of violating environmental regulations, according to online records from Yancheng city’s environment and ecology bureau.

In 2015 and 2017, the firm was fined for violating rules on solid and water waste management. /muf