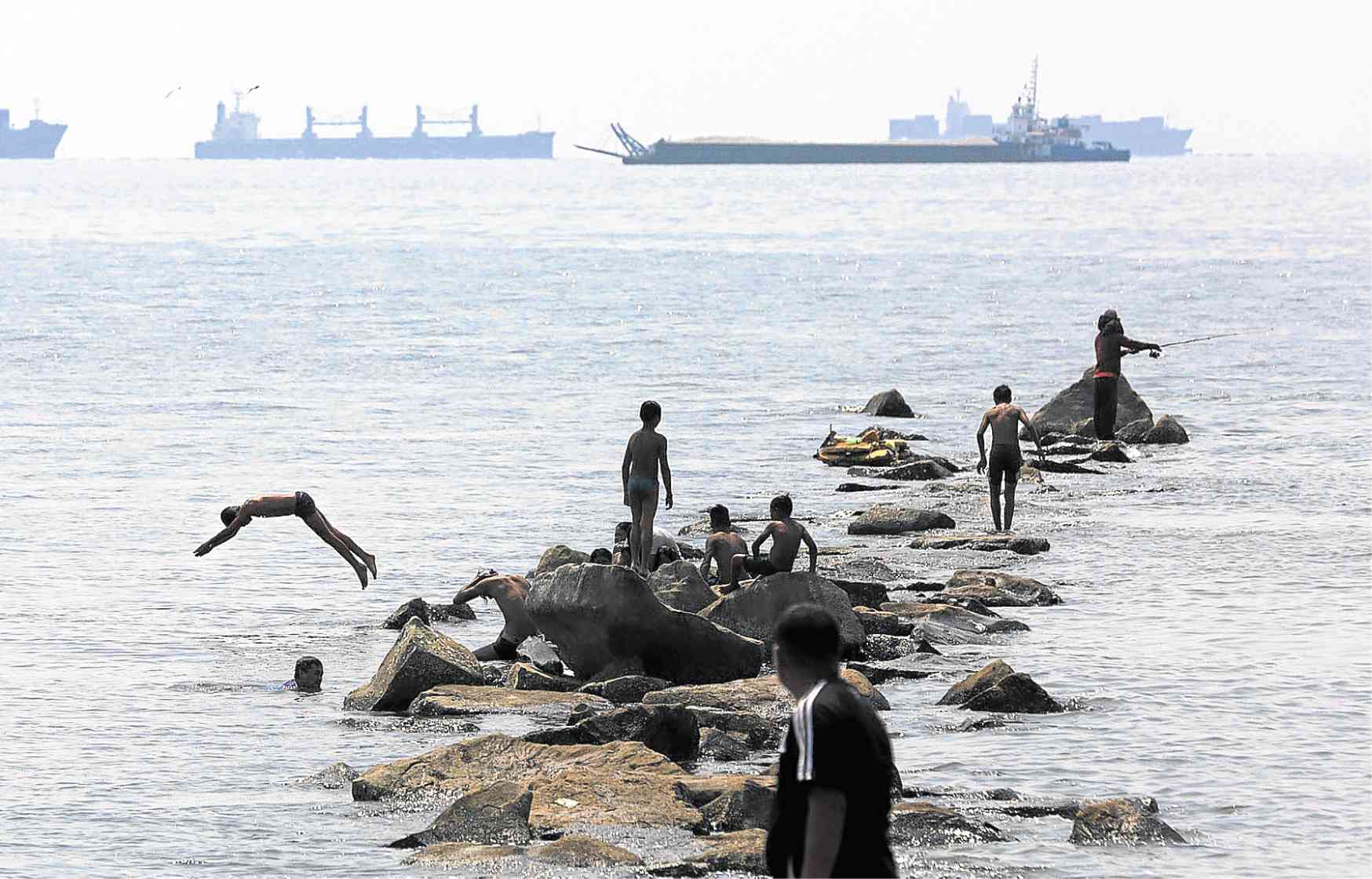 TOXIC DIP A Philippine study on mercury pollution identified Manila Bay, which is currently undergoing a major cleanup, as one of the five bodies of water in Luzon and Mindanao with a high concentration of the toxic metal. —GRIG C. MONTEGRANDE

At least five bodies of water in Luzon and Mindanao have been identified as having high levels of mercury, according to an assessment that studied the prevalence of the chemical and existing policies to curb its use and release to the environment.

The Philippine Minamata Initial Assessment (MIA) report identified at least 18 sites across the country, including landfills and mining sites, as areas suspected to be contaminated by the toxic metal, also known locally as “asoge.”

Those identified are mostly located near or at the heart of artisanal and small-scale gold-mining sites that use mercury and other heavy metals.

Mercury, a naturally occurring metal, has been widely used in agriculture, industry and medicine due to its unique properties. It can be found in thermometers, fluorescent lamps, dental fillings and even skin-whitening products.

The World Health Organization considers mercury one of top 10 chemicals of major public health concern, citing toxic effects on lungs, kidney, skin and eyes, even in small amounts of exposure.

Among the bodies of water suspected to have high concentrations of mercury include Manila Bay in Metro Manila and Meycauayan River in Bulacan province.

Also identified were Mambulao Bay in Camarines Norte province and Lumanggang Creek and Naboc River, both in Davao region.

All three were earlier tagged as potentially polluted by heavy metals, not just mercury, since these are located near mining operations.

Project leader   said that while these areas were assessed as hot spots for mercury concentration, these could not be officially declared contaminated.

“Right now, we don’t have a standard operating procedure on handling mercury, or even a legal definition of contaminated sites,” he said at the report’s launch in Quezon City on Wednesday.

In identifying the sites, information was gathered from yearlong focus group discussions across the country beginning in 2017. The discussions involved local governments, industries, residents and even the miners themselves, said project technical assistant Ariane Farnazo.

Among the identified hot spots were the abandoned Palawan Quicksilver Mines in Puerto Princesa City, Palawan province, a past mercury producer; Mabuhay Vinyl Corp. in Iligan City, a chlor-alkali producer; and mining and gold processing sites in Camarines Norte and Masbate provinces.

Provinces in regions that heavily rely on mining, such as Cordillera Administrative Region and Caraga, were also seen as areas of concern.

“These sites were identified to determine which would also be priority areas in policies and efforts in addressing mercury use,” Farnazo said.

The site identification and assessment was one of the components of the MIA project, which was spearheaded by the Department of Environment and Natural Resources in July 2017.

The project was done to assess the country’s readiness as a party to the Minamata Convention on Mercury, an international treaty created to protect human health and the environment from the negative effects of mercury.

It was named after a Japanese city where thousands were adversely affected and hundreds were killed after a nearby bay was contaminated by methylmercury discharged from a chemical factory.

“There is no safe level of mercury in humans,” Farnazo said, noting that the chemical could accumulate in the body. “It is like a ticking time bomb.”

In Minimata City, those exposed to the toxic chemical suffered loss of sensation in their hands and feet, difficulties in seeing, hearing and swallowing, and convulsions and death in extreme cases.

In its inventory done from 2016 to 2017, the report identified primary metal production as the major source of mercury in the country, accounting for over 33,600 kilograms per year.

This was followed by landfills and wastewater treatment and other intentional product or process usage.

In addressing mercury pollution, the report said a comprehensive regulatory framework is needed to address the chemical from its acquisition to its disposal.

At present, the country does not have an established disposal facility for mercury, Farnazo said.

“One of the challenges also is that we do not have a lot of data on this issue,” Monroy said, noting also the weak enforcement of existing environmental laws that could help curb mercury use and release.

Vegetable shipments from La Trinidad suspended due to COVID-19 precautions