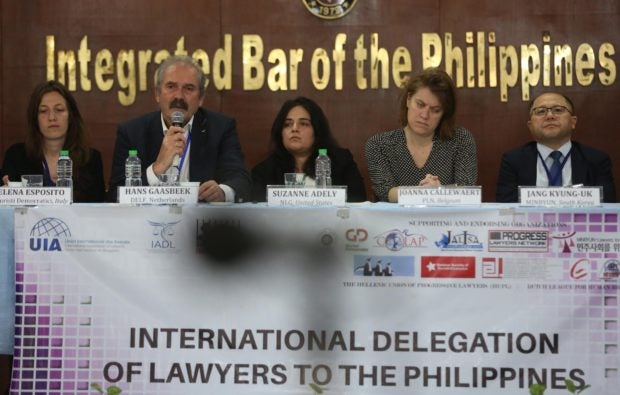 DEADLY PATTERN Lawyers Elena Esposito of Italy, Hans Gaasbeek of the Netherlands, Suzanne Adely of the United States, Joanna Callewaert of Belgium and Jang Kyung-uk of South Korea share their findings with the media at the IBP headquarters in Pasig City on Monday. —NIÑO JESUS ORBETA

President Rodrigo Duterte’s tirades against the legal profession have given perpetrators of the attacks on lawyers a “license to harass and kill,” according to an international delegation that is investigating the killings of lawyers in the country.

After a three-day investigation, the team of nine lawyers said that the lethal mix of the President’s rhetoric and an overall lack of oversight on the part of law enforcement officials had led to a “sharp increase” in “severe human rights violations” that targeted legal professionals.

“The killings, harassment, surveillance and criminalization of lawyers prevent them from fully and freely exercising their profession,” the delegates said in their initial report, which they presented at the Integrated Bar of the Philippines (IBP) headquarters in Pasig City on Monday.

It said it investigated 13 incidents of attacks on lawyers, judges and prosecutors.

Thirty-eight lawyers have been killed during the President’s term, according to the IBP.

Rex Jasper Lopoz, the most recent victim, was gunned down on the eve of the delegation’s arrival.

The team pointed out the “lack of sufficient investigation” on the part of executive bodies and labeled the violence as “state-sanctioned.”

Among these, it said, were the President’s own public declarations, including his promise to include the lawyers of drug suspects in his bloody war on drugs and comment that he would ask police to shoot human rights advocates who meddled in their operations.

“President Duterte and his administration should refrain from publicly attacking lawyers and instead publicly condemn all attacks against lawyers, prosecutors and judges at all levels and in strong terms,” the report said.

Read Next
Cebu slay a crime of passion, says NBI
EDITORS' PICK
When skincare meets makeup: Introducing the BYS Cosmetics Full Coverage line
Mallorca City: Home of Cavite’s finest industrial hub
Last mile: Honda workers fight for a dignified ending
Duterte to ABS-CBN: Apology accepted but franchise up to House
World ‘not ready,’ WHO exec warns as virus surges in more countries
Here’s How Protein and Calcium Deficiency Can Affect Your Kid’s Health
MOST READ
If PH can’t be self-reliant, choose: Be a US territory or China’s province – Duterte
BREAKING: Duterte: ‘I accept the apology’ of ABS-CBN
Pacquiao shrugs off Cayetano’s insults: I’m not ‘epal,’ ‘sipsip’
Last mile: Honda workers fight for a dignified ending
Don't miss out on the latest news and information.