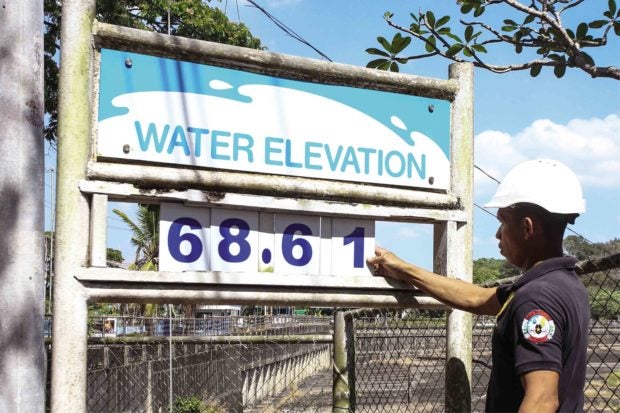 Mandaluyong residents and business owners appeared cautiously optimistic on Monday as water was gradually restored to most parts of the city, allowing them to ease back into their daily routines that had been upended by last week’s water shortage.

But even as they seemed to heave a collective sigh of relief, the chaos resulting from the water interruptions remained fresh on residents’ minds.

“I can only hope,” said a woman who identified herself only as Maricon of Wash King Machines at Barangay Barangka Drive, when asked if she thought the crisis was over.

Barangka Drive was one of the villages most affected by Manila Water Co. Inc.’s supply adjustment scheme, implemented allegedly due to the plunging water level of La Mesa Dam.

Water finally returned to their taps on Friday, Maricon said, allowing the small laundromat to reopen after a weeklong shutdown.

She calculated that they lost at least P3,000 a day due to the water shortage.

Maricon added that even though their water supply had gone back to normal, they continued to keep a stock of water-filled containers at the laundromat just in case their taps dried up again.

Feli Patricio, a hairstylist at Brush and Style Salon, also at Barangka Drive, said that Monday was only the second day they were operating normally.

The salon, which relied on an array of services ranging from hair coloring to shampooing to supply the bulk of its income, had offered only haircuts the previous week. Since only one employee knew how to cut hair, the rest had nothing to do.

Although their water supply was now consistent, Patricio lamented the financial losses their shop had incurred.

“It’s not like we can ask Manila Water not to charge us, but if you think about it, there should be a reduction there,” she said.

Aaron Gutierrez, who works at Aqua Prima in Barangay Barangka Itaas, told the Inquirer the price for four gallons of water had gone back down to P35 after reaching a high of P50. Like several other refilling stations, he said they had been forced to acquire their water from a separate, farther source.

Read Next
Water concession agreement should be reviewed
EDITORS' PICK
Gov’t urged to shift public transport system to service contracting
Leveling up your ‘lutong bahay’ with the kitchen companion you never knew you needed
Cherry Mobile teams up with Cloud Panda PH, launches online store
WATCH: Mga eskwelahan na ginawang quarantine facility, binigyan ng dalawang linggo para linisin
MMDA: Commuters to blame for chaos
Crisis seen in absence of jeepneys in Metro Manila
MOST READ
MMDA to sue, slap P1,000 fine on bike group
MMDA: Commuters to blame for chaos
‘I am a natural-born Filipino’ — Gabby Lopez
Calida ‘just the lawyer, not the client’ and must ‘never lose his cool’ – Macalintal
Don't miss out on the latest news and information.