Teen smashes egg on senator’s head over comments vs Muslims 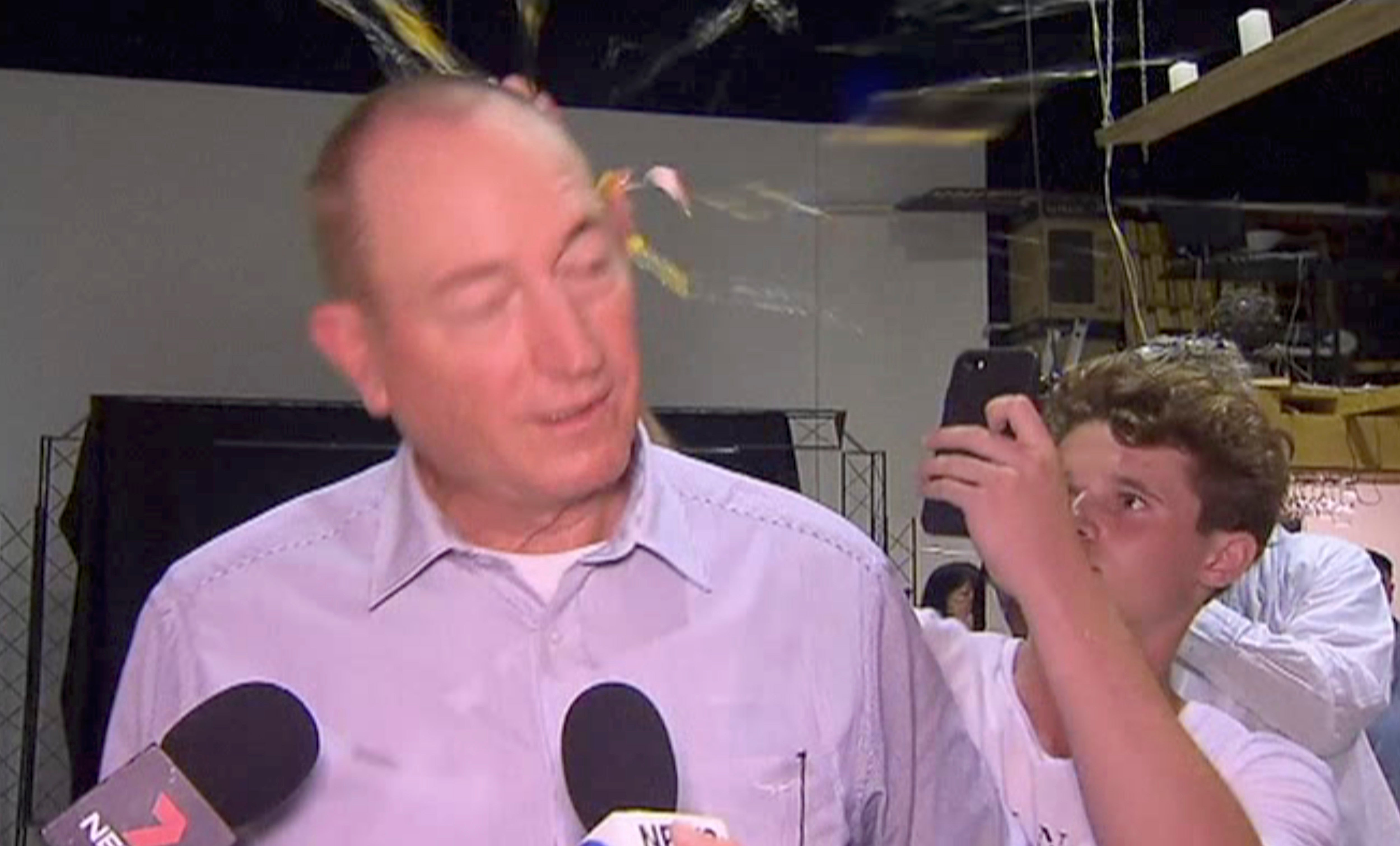 In this image made from video, a teenager breaks an egg on the head of Senator Fraser Anning while he holds a press conference, Saturday, March 16, 2019, in Melbourne, New Zealand. Following the mass shootings on Friday, Anning came under sharp criticism over tweets including one that said: “Does anyone still dispute the link between Muslim immigration and violence?” AP

CANBERRA, Australia — An Australian senator had a raw egg cracked over his head and faces censure from his fellow lawmakers after sparking outrage by blaming Muslim immigration for the New Zealand mosque shootings.

Sen. Fraser Anning came under blistering criticism over tweets on Friday including one that said, “Does anyone still dispute the link between Muslim immigration and violence?”

“The real cause of the bloodshed on New Zealand streets today is the immigration program which allowed Muslim fanatics to migrate to New Zealand in the first place,” he said in a statement.

Television cameras caught a 17-year-old boy breaking an egg on Anning’s head and briefly scuffling with the independent senator while he was holding a news conference Saturday in Melbourne.

Police said the boy was arrested but was released without charge pending a further investigation. No motive was offered for the egging.

The government and opposition party agreed to pass a censure motion against Anning over his stance on the Christchurch shootings when Parliament resumes in April.

While such a reprimand is a symbolic gesture, the major parties expect to demonstrate how isolated Anning’s views are among Australia’s 226 federal lawmakers. The major parties’ support ensures the censure motion will be passed by both chambers.

“In his conflation of this horrendous terrorist attack with issues of immigration, in his attack on Islamic faith specifically — these comments are appalling and they’re ugly and they have no place in Australia, in the Australian Parliament,” Morrison said. “He should be, frankly, ashamed of himself.”

“When one looks at his statement, it may as well have been an extract from the manifesto of the person that perpetrated these heinous crimes, this act of terrorism in Christchurch,” Rauf said.

Rauf said Anning was unfit for the Senate.

Opposition lawmaker Penny Wong accused Anning of attempting to use the tragedy to grab attention ahead of elections in May.

Anning only received 19 votes in the last election in 2016. But because of a quirk in the Australian electoral system, he was elevated to the Senate by the anti-immigration, anti-Muslim One Nation party after a court ruled that its senator, Malcolm Roberts, had not been eligible to run for election due to his dual citizenship.

Anning later defected from One Nation to another anti-immigration party, then became an independent. Analysts say Anning is unlikely to be re-elected as an independent candidate in May.

Anning was widely condemned for his first speech to the Senate in August advocating reviving a white-only immigration policy and using the term “final solution” in calling for a vote on which migrants to admit into the country. Critics accused him of making a veiled reference to the Nazi extermination of Jews.

The government also announced on Saturday it had banned right-wing commentator Milo Yiannopoulos from touring the country over his social media response to the Christchurch shootings.

Coleman didn’t specify which comments he was referring to.

Yiannopoulos said on Facebook that attacks like Christchurch happen because “the establishment panders to and mollycoddles extremist leftism and barbaric, alien religious cultures.”

Lawmakers within Australia’s conservative government had been quarreling in recent weeks over whether the firebrand commentator should be allowed to tour Australia this year. /cbb