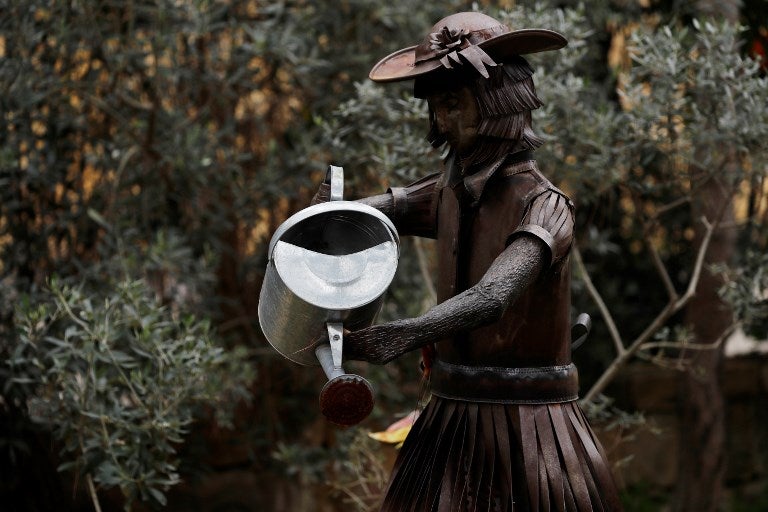 This picture shows a sculpture by Lebanese Artist Charles Nassar made out of artillery shrapnel in the village of Remhala, south of Beirut, on March 7, 2019. AFP

REMHALA, Lebanon — There is a violinist, a farmer tilling his field, and a cockerel with a propeller for a head. All were once rockets, artillery shells, or bullets falling on Lebanon’s battlefields.

Artist Charles Nassar has been transforming their dark, wrangled remains into sculptures to celebrate tradition and memory.

“I hate shrapnel, but I also love it at the same time,” said the 54-year-old with a neat salt-and-pepper beard, in a garden south of Beirut.

A series of conflicts have rocked the tiny multi-confessional country in recent decades.

Metal rained down during the 1975-1990 civil war, the 2006 conflict between Lebanese Shiite movement Hezbollah and Israel, and during clashes in a Palestinian camp the following year.

Nassar was forced to flee Lebanon during the civil war, and his grandmother was killed in the violence.

But she and other characters of the artist’s past live on, displayed in the nooks and crannies of his garden in the village of Remhala.

In one corner, a metal version of his grandmother collects snails, while his father milks a cow nearby.

In another sculpture, a woman bakes crispy flatbread slapped inside a traditional outdoor stove.

“The shrapnel takes on shapes in my mind… They guide me to what I should do with them,” said the artist.

Nassar first created his metal sculptures in Beirut, but after the war he decided to display them on land he owned in Remhala.

He has worked the war detritus into 250 creations so far, selling 150 that he is now working to replace.

“I don’t want to remind people of war,” Nassar said.

Instead, the idea is that “anybody who was bothered by an artillery shell starts to like it,” he added.

“I’m trying to turn black into white, something negative into something positive.” /cbb