A hint of town’s rich history in old church photo 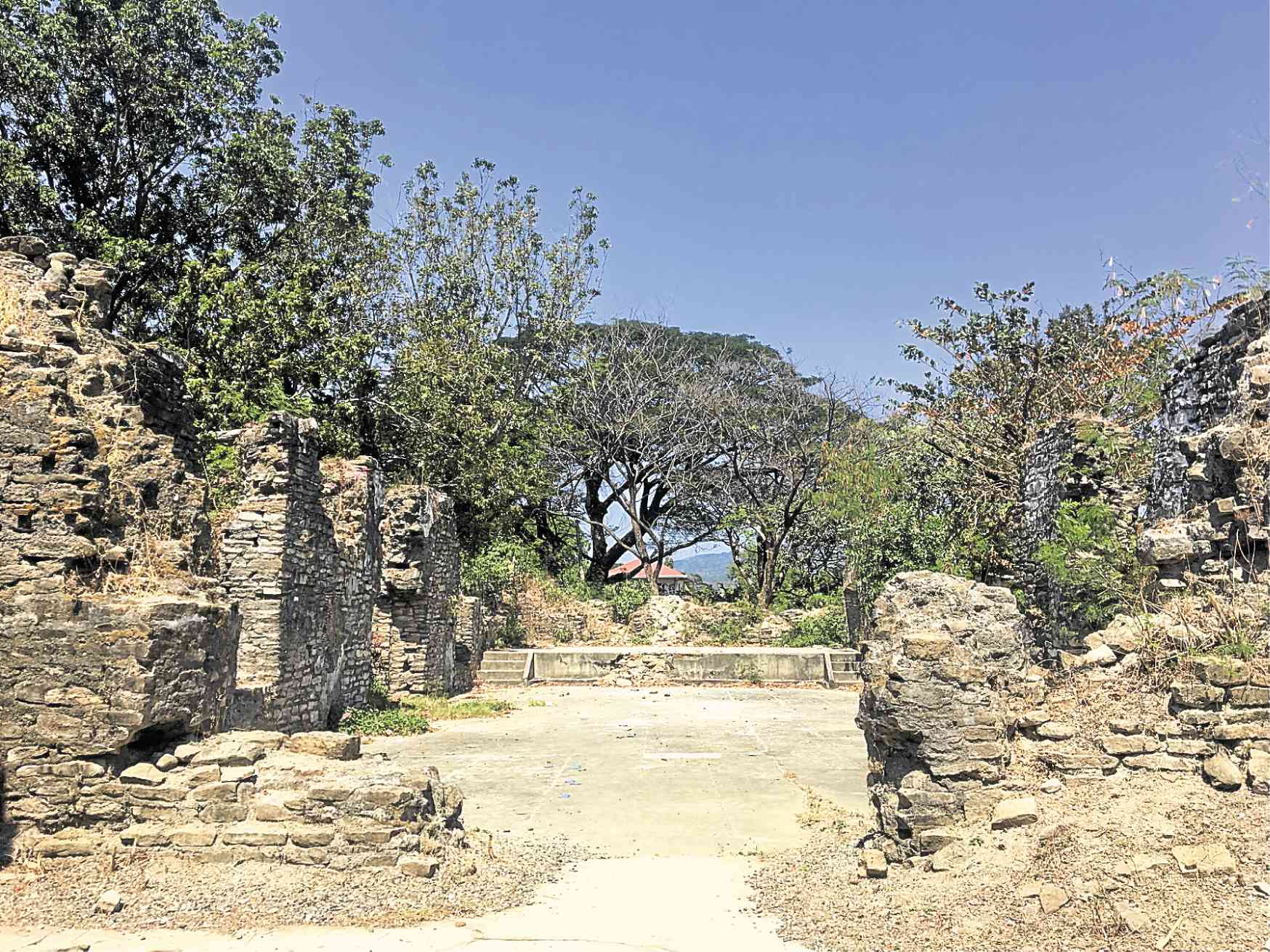 PASUQUIN HERITAGE The foundation of the old Catholic church at the town center of Pasuquin in Ilocos Norte province remains intact inside a school compound.

LAOAG CITY — When he visited the secret archives of the Vatican on Feb. 20 for his doctoral research, Fr. Ericson Josue stumbled upon a vital proof of historicity about his hometown, Pasuquin, among the photos of Ilocos Norte churches that were devastated by the 1931 earthquake while browsing through the appendices of a file.

“The churches in ruins were those of Badoc, Paoay, Batac and Bacarra [towns]. On the last page, I saw a photo of an unfamiliar church. I was thinking it was not an Ilocos Norte church,” the priest-historian said.

“After reading the description on its upper right corner, I had goose bumps, astounded and was in a daze,” Josue said. The description read: “The ruined Catholic church of Pasuquin, Ilocos Norte, Philippine Islands.”

“I had to shake my head to check if I was dreaming or not, for there had been several times I dreamed of a huge ruined church of Pasuquin,” he said.

For two decades, Josue had been looking for a heritage artifact to help prove the rich history of Pasuquin while pursuing a doctorate in history and cultural heritage of the church in Rome.

A former village of Bacarra, Pasuquin had been in existence as early as 1591 under the Diocese of Nueva Segovia. It was elevated to a parish in 1784 and there had been few reported repairs on the church during the mid-19th century.

The photograph of the old Pasuquin Fil-Hispanic church could strengthen Josue’s book research about the history of the town, which he presented at the Universidad de Navarra in Spain in 2011.

In 2017, the University of Santo Tomas (UST) gave its approval to publish Josue’s research to include short reviews from other historians. The priest was at first hesitant to pursue the project as it still lacked details of Pasuquin’s Puyupuyan watchtower and a photo of the old Fil-Hispanic church.

“These are two significant heritage artifacts in the history of the town,” Josue told the Inquirer.

After going back to Rome from a 13-day break in the Philippines, the priest visited the Vatican archives and found the old photo of the ruined Pasuquin church. With his discovery, he can now publish his book with UST.

The church facade, measuring 100 meters long and 35 m wide, resembles that of St. Augustine Church in Paoay, which has been declared a World Heritage Site by the United Nations Educational, Scientific and Cultural Organization.

When the Inquirer visited the Pasuquin church within the compound of St. James Academy at the town center, the church foundation was still intact.

“The foundation could still speak of the lost glory that was in the site. It tells us of a church that once united our forefathers in prayer. This was the ground where our ancestors knelt in supplication to a God of providence,” Josue said.

Though most of the church structure is gone, what remains “ought to be valued, protected and preserved,” he said.

Citing a report of Gobernadorcillo Pío de Luna in 1898 to the Philippine revolutionary government, Josue learned that the church was abandoned for liturgical use in 1896 after the earthquake weakened its base.

Records showed that in 1902, almost all residents of Pasuquin turned Aglipayan following the defection of their parish priest, Esteban Paz.

The Aglipayan church occupied the area until 1908, when the Supreme Court decided its return to the Catholic Church.

Fr. Trinidad Ranjo, a native of Pasuquin who was assigned to work for the revival of Roman Catholicism in the town, started his mission with barely five families. He built a small church over the foundation of an unfinished convent. (The ruins of the small church are found north of the present church.)

Josue said he believed that a typhoon struck the province in 1913, destroying the old church and damaging almost all places of worship there.

Old-time residents recalled that the remaining walls of the old church were demolished with explosives after World War II to give way to the construction of a new church. The project was not pursued, however. 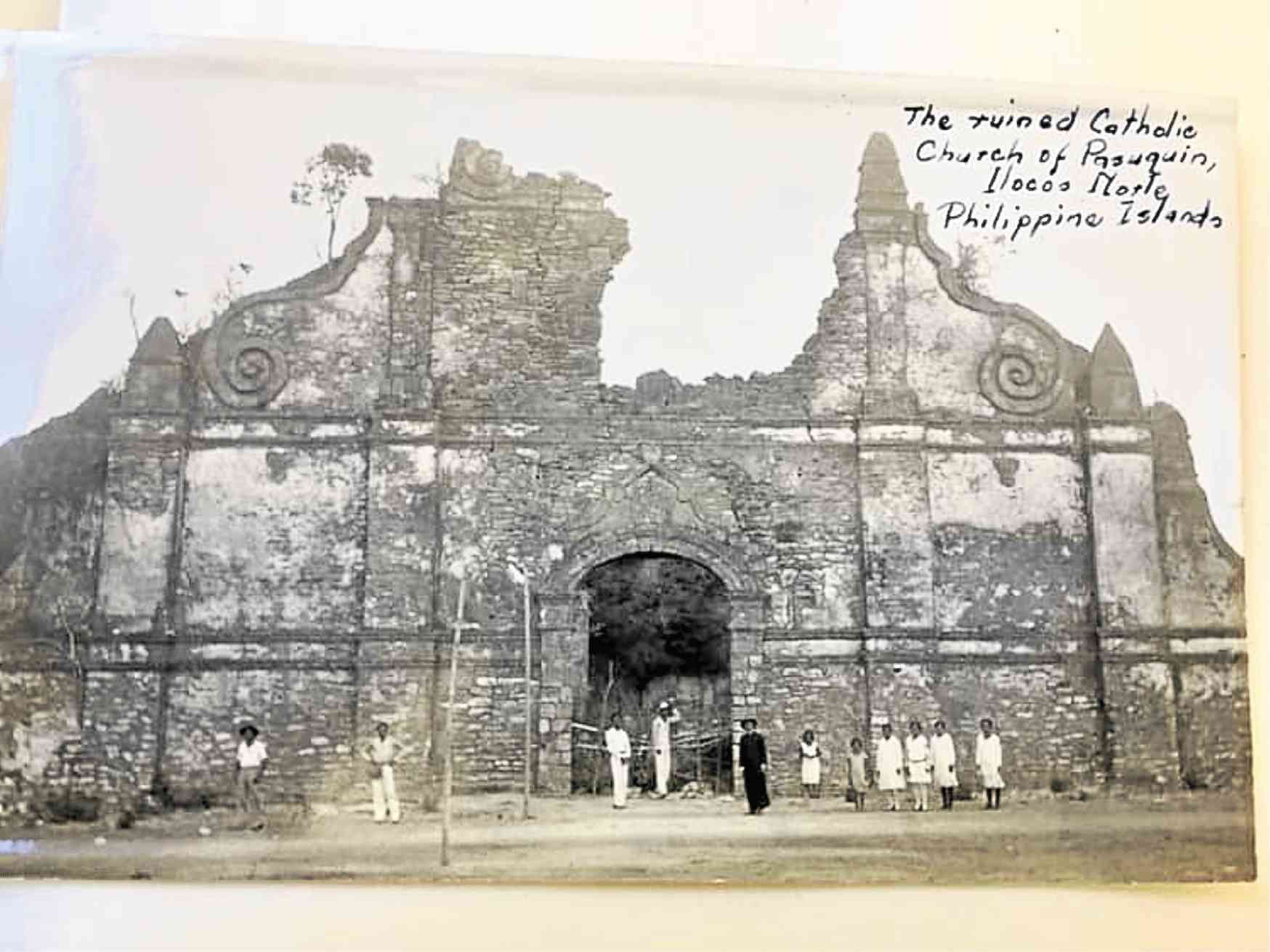 A vintage photo of the church’s ruins (top, courtesy of Fr. Ericson Josue), showing its facade, is kept at the Vatican archives. —PHOTOS BY LEILANIE ADRIANO

In 1963, Bishop Antonio Mabutas of the newly established Diocese of Laoag used the area to build a school building of St. James Academy for its 500 elementary and high school students.

After reading the personal notes of Josue on Facebook, Elleina Zamora, 15, and some of her classmates immediately visited the church ruins.

According to Manolo Noche, an architect, the photo at the Vatican archives is the first and, so far, the only extant material that provides the architecture of the facade of the old Pasuquin church.

Noche noted that the church was among the more spacious churches in the old Ilocos province.

“Knowing the rich history of my town is enlightening and I feel so proud of it,” Zamora said.