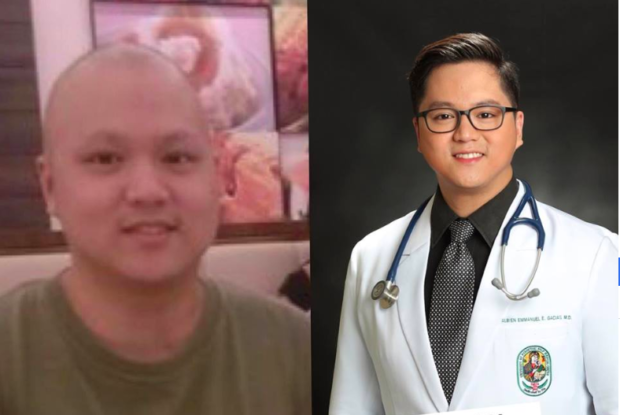 MANILA, Philippines–This #10yearchallenge of a new board passer of the Physician Licensure Examination inspires netizens as he shares how he has become a cancer survivor who is now “licensed to heal.”

(Ten years ago I was just praying to be healed, I didn’t have any idea that You will make me an instrument to heal others as well.)

Gacias told INQUIRER.net that he was diagnosed with “Malignant Germ cell tumor, a kind of lung cancer,” on July 2008 when he was only 19 years old.

(At the time when I was diagnosed, I was worried that I would stop studying as a nursing student. And I’m also scared because I’m the eldest in the family.)

Being diagnosed with cancer isn’t easy for Gacias as he underwent surgical operation (lobectomy of the lungs) and series of chemotherapy and radiotherapy.

“Pero (But) God is good kasi nakasurvive naman po (because I survived it),” he said. “Without the help/support of my family and friends hindi ko din naman masu-survive lahat (I wouldn’t survive all of it).”

In his post, Gracias dedicated his success to his mother and brother who are now both “in heaven.”

“Para sa inyo to (This is for you)  Mommy and honeyboy Al Jules Sean Gacias in heaven. #10YearChallenge #CancerSurvivor.”

His mother was also diagnosed with pancreatic cancer on 2006 and died December the same year while his brother died because of an accident.

“He (brother) is one of the main reasons why ako nag med (I studied medicine),” Gacias added.

When asked about what advise he can give to students and cancer patients like him, he said that they should just focus on their goals no matter how hard.

“Kahit anong struggle sa buhay (Whatever your struggle in life) just focus on your goals no matter how hard it is. Kasi (because) God will make a way,” he said.

(Let’s just trust in the Lord… Let us not give up, just keep fighting everyday.)