Bayan Muna: P44B from China loans may be used to pay Chinese consultants

(Why is it that the consultancy fee is more than 20 percent of the total loans? DOF should clarify if the consultants are from China.)

In a Freedom of Information request sent to National Economic and Development Authority (Neda) Director-General Ernesto Pernia on Thursday, Colmenares said he asked whether the loan “would be used to pay Chinese consultants.”

Neda has yet to respond to the request.

(We borrow P14 billion from China then we will give back part of it to them through fees Chinese consultants. This should be made clear to us. They will earn from the loan interest, but their consultants will also earn from the contract.)

His office said they got the figure from the leaked copy of the Chico River project loan agreement that he had earlier revealed as “onerous and favorable to China.” 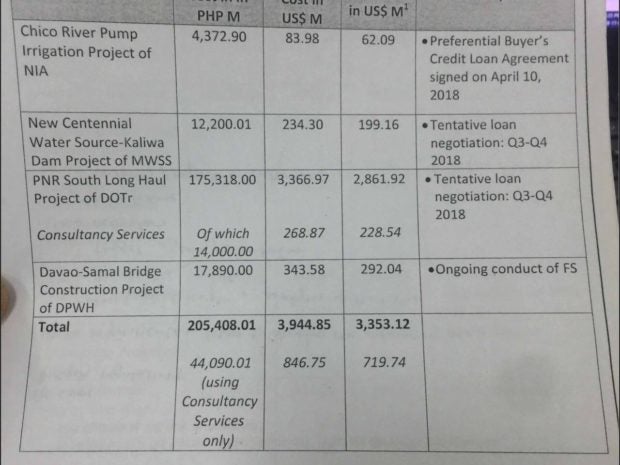 Part of the leaked copy of the Chico River project loan agreement released to the media by Bayan Muna Chair and Makabayan senatorial candidate Neri Colmenares on March 15, 2019.

The leaked loan agreement showed an interest rate of 2 percent and provisions requiring the use of a Chinese contractor, the use of a Beijing-based arbitration body under China’s laws, and a confidentiality clause that prevented public scrutiny.

Colmenares said Neda should be transparent if they have nothing to hide.

“Public transparency, not official secrecy, should be the rule since these contracts and loan agreements will tie our people down for 20 to 25 years,” he added.

The candidate said he requested the official and certified true copies of the loan documents and contracts covering the said consultancy services for the four projects.

Colmenares said he made the request to “confirm the existence of the said documents and contracts and to comply with court requirements in case my office believes a case should be filed in court in relation to these documents.” /ee