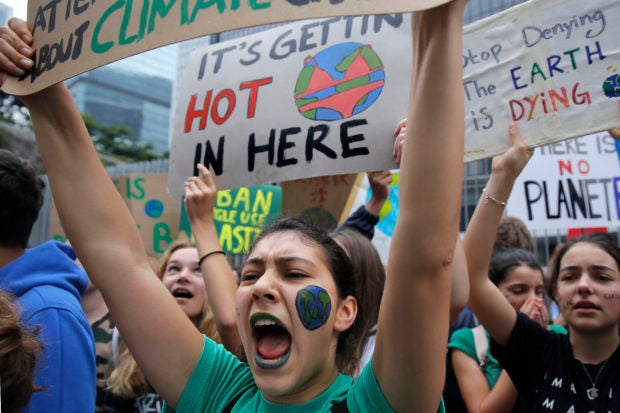 Hundreds of schoolchildren take part in a climate protest in Hong Kong, Friday, March 15, 2019. Students in more than 80 countries and territories worldwide plan to skip class Friday in protest over their governments’ failure to act against global warming. The coordinated ‘school strike’ was inspired by 16-year-old activist Greta Thunberg, who began holding solitary demonstrations outside the Swedish parliament last year. (AP Photo/Kin Cheung)

BERLIN — They’re angry at their elders, and they’re not taking it sitting down.

Students worldwide are skipping class Friday to take to the streets to protest their governments’ failure to take sufficient action against global warming.

The coordinated ‘school strikes,’ being held from the South Pacific to the edge of the Arctic Circle, were inspired by 16-year-old Swedish activist Greta Thunberg, who began holding solitary demonstrations outside the Swedish parliament last year.

Since then, the weekly protests have snowballed from a handful of cities to hundreds, driven by social media-savvy students and dramatic headlines about the impact of climate change.

Thunberg, who was recently nominated for the Nobel Peace Prize, was cheered for her blunt message to leaders at the World Economic Forum in Switzerland this year, when she told them: “I want you to panic. I want you to feel the fear I feel every day.”

Friday’s rallies are expected to be one of the biggest international actions yet.

Protests were underway or planned in cities in more than 100 countries, including Germany,  Hong Kong, India, New Zealand and  Finland.

Some politicians have criticized the students, suggesting they should be spending their time in school, not on the streets.

“One can’t expect children and young people to see all of the global connections, what’s technically reasonable and economically possible,” said the head of Germany’s pro-business Free Democratic Party, Christian Lindner. “That’s a matter for professionals.”

But scientists have backed the protests, with thousands signing petitions in support of the students in Britain, Finland and Germany.

“We are the professionals and we’re saying the young generation is right,” said Volker Quaschning, a professor of engineering at Berlin’s University of Applied Sciences.

“We should be incredibly grateful and appreciative of their bravery,” said Quaschning, one of more than 14,000 German-speaking scientists to sign a letter of support this week. “Because in a sense, it’s incredibly brave not to go to school for once.”

Scientists have warned for decades that current levels of greenhouse gas emissions are unsustainable, so far with little effect.

In 2015, world leaders agreed in Paris to a goal of keeping the Earth’s global temperature rise by the end of the century well below 2 degrees Celsius (3.6 degrees Fahrenheit).

Yet at present, the world is on track for an increase of 4 degrees Celsius, which experts say would have far-reaching consequences for life on the planet.

“As a doctor, I can say it makes a big difference whether you’ve got a fever of 41 degrees Celsius (105.8 Fahrenheit) or 43 C (109.4 F),” said Eckart von Hirschhausen, a German scientist who signed the call supporting striking students. “One of those is compatible with life, the other isn’t.”

German Chancellor Angela Merkel and French President Emmanuel Macron have publicly welcomed the student protests, even as their policies have been criticized as too limited by environmental activists.

In France, activist groups launched legal action this week for failing to do enough to fight climate change, citing a similar successful effort in the Netherlands .

In Germany, environmental groups and experts have attacked government plans to continue using coal and natural gas for decades to come. Activists say that countries like Germany should fully “decarbonize” by 2040, giving less-advanced nations a bit more time to wean themselves off fossil fuels while still meeting the Paris goal globally.

“The fight against climate change is going to be uncomfortable, in parts, and we need to have a society-wide discussion about this,” said Quaschning.

That conversation is likely to get louder, with several U.S. presidential hopefuls planning to campaign on climate change./gsg

Read Next
Bayan Muna: P44B from China loans may be used to pay Chinese consultants
EDITORS' PICK
A gem of a residence in the new normal
Water remains our saving grace right now
Health workers from other regions eyed as ‘substitute’ for NCR frontliners
Smart 5G goes live
PNP: Checkpoints back in MECQ areas
MECQ guidelines in infographics
MOST READ
MECQ guidelines in infographics
MECQ in NCR, other areas: Mass transportation suspended, quarantine pass required anew
Doctors group to Duterte: ‘There was never a call for a revolt’
Want higher pay? Join the police force, Duterte tells nurses
Don't miss out on the latest news and information.