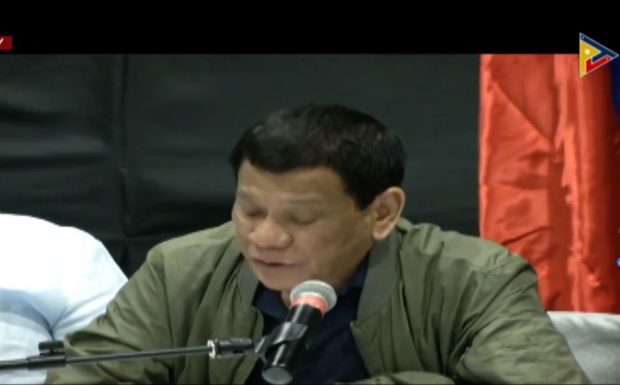 MANILA, Philippines – President Rodrigo Duterte announced on Thursday night in Davao City the names of 46 politicians on the government’s “narcolist,” or elected officials involved in the illegal drugs trade.

The President stressed that several government agencies have vetted and validated the list, prompting him to “unmask these drug personalities.”

Also on Thursday, the Department of the Interior and Local Government (DILG)  filed before the Office of the Ombudsman administrative cases against the 46 officials.

The politicians identified by the President were:

INQUIRER.net is contacting these officials to get their side.

So far, only Representative Veloso responded. He vehemently denied his alleged involvement in the illegal drug trade in a telephone interview with INQUIRER.net.

(That’s ridiculous, that’s politics … Every time there is an election, we are the drug lords here, I am linked [to the drug trade].)

Duterte, who read the names during the joint command conference of the Philippine National Police (PNP) and the Armed Forces of the Philippines (AFP), said he still had other names which he could not yet disclose because they were not yet validated.

I’m not really interested in releasing it before or after the election because I don’t have any intention of hurting anybody, so the other (narcolist), huwag muna, dahil di ako sigurado,” he said.

Mabilog, who had earlier been dismissed from service and who went on exile in the United States because of threats to his life, and Loot got special mention from the President.

When Mabilog’s name came up the President reminded the US Embassy that he had given them the name of the mayor who was not supposed to be allowed entry in the US.

“I’d like to inform the US Embassy, because I thought I gave you the list (and his name was there), kung bakit nakalusot ang mayor na ito (why was this mayor allowed to enter) , I’d like to ask the embassy, (I gave you the list) so that Filipino addicts who’d go there to destroy your country will be denied visa, now I’m asking bakit nandiyan sa (why he is in) America, if not in Canada?” Duterte asked, referring to Mabilog, who reportedly took refuge in the US because of threats to his life.

He also made fun of Daanbantayan Mayor Vicente Loot, a retired general.

“But I think he did not file (his candidacy), there are four incumbents here. Loot, he had been ambushed two times. Sino ang nag ambush kay (Who ambushed) Loot? Kindly raise your right hand,” the President asked, before berating Loot for being a scholar of the Philippine Military Academy (PMA) who ended up in the narcolist.

“My decision to unmask these drug personalities was anchored on my trust in the government agencies who have vetted and validated the narco-list,” Duterte said.

He said the Anti-Money Laundering Council and the Presidential [Anti]-Corruption Commission have conducted their respective investigations and “the results of which will aid us in filing airtight cases against them.”

“Remember that ‘public office is a public trust;’ an official’s right to privacy is not absolute and there is a compelling reason to prioritize the interest of the state and the people,” he said.

“As your President, my ultimate concern is the pursuit of order in government and the welfare of the Filipino people. My administration assures you of our dedication to change the lives of Filipinos now, not tomorrow,” he said.  With a report from Inquirer Mindanao/gsg