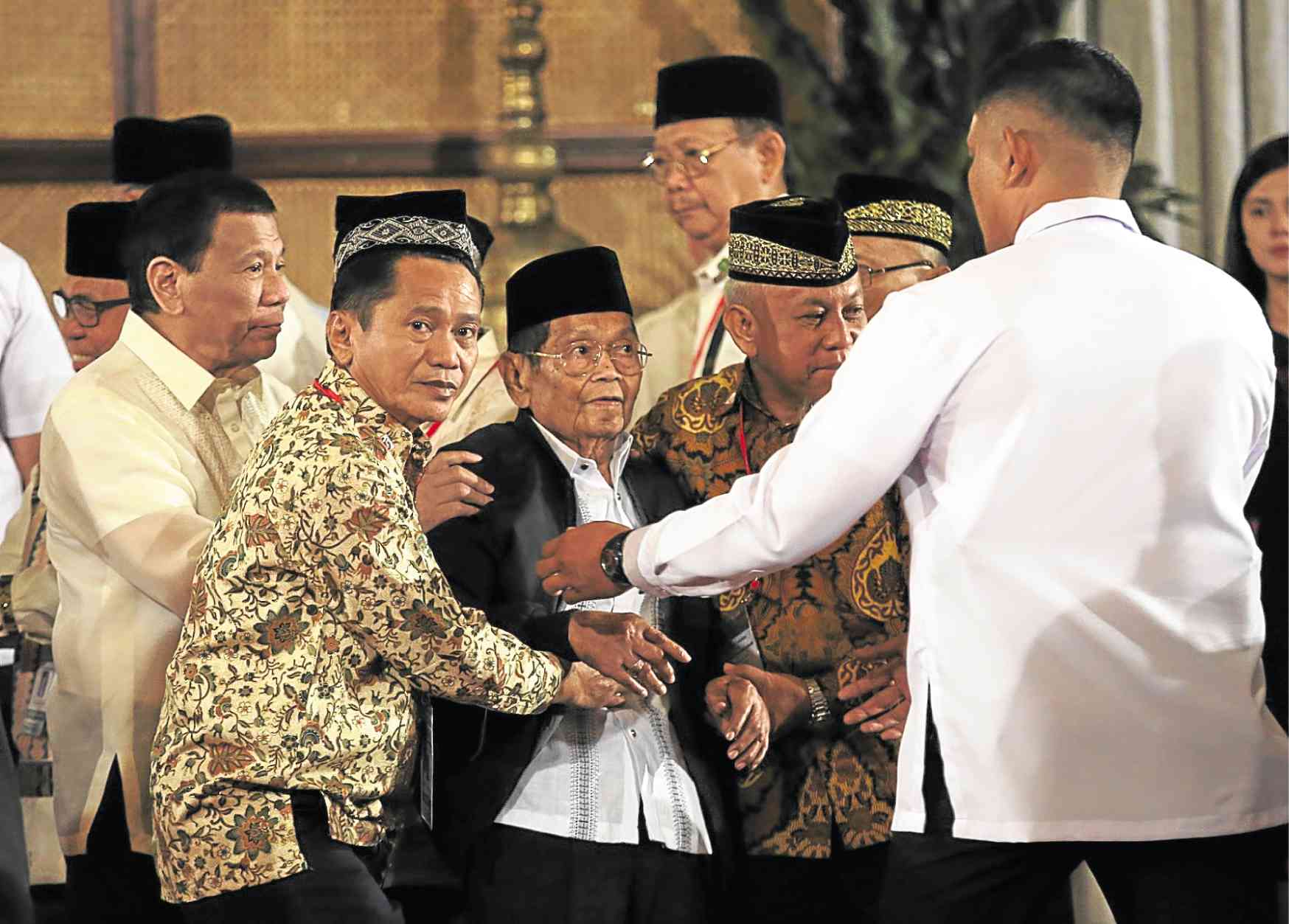 TILL HIS LAST BREATH Former Moro rebel leader Ghazali Jaafar (center), already ailing in this Feb. 22 photo taken after President Duterte swore him and other members of the interim regional Bangsamoro government, died on Wednesday after seeing the creation of a new Muslim autonomous region. —LYN RILLON

Malacañang expressed “heartfelt condolences” to the family and friends of the “warrior of peace.”

“He has fought many battles for peace and may Allah grant him a place in Jannah (Paradise),” presidential spokesperson Salvador Panelo said in a statement.

Mohagher Iqbal, who served as the MILF’s peace panel chair, said Jaafar was more of a politically savvy leader than a military tactician and was one who “(made) things possible through compromises” without abandoning his principles.

Iqbal said Jaafar’s expertise was in laying down approaches and methodologies to achieve the “desired objective.”

According to Benedicto Bacani, executive director of the Institute for Autonomy and Governance, a Cotabato-based antiterror think tank, Jaafar had established a “broad political network of support for the cause of the Bangsamoro” and was skilled at unifying diverse interests.

“He is a consensus builder, and that’s the vacuum he left behind,” Bacani said.

Not trained to fight

Jaafar had called Malacañang the “seat of Moro oppression.”

He underwent angioplasty in July 2018 while in Metro Manila following the approval of the final version of the Bangsamoro Organic Law (BOL) by the congressional bicameral conference committee.

During the oath-taking for BTA members in Malacañang on Feb. 22, he fell back on his wheelchair after standing during the ceremony.

Jaafar died of kidney complications around 1 a.m. on Wednesday at a hospital in Davao City.

“He is a big loss to the Bangsamoro people. His passing comes at a time when we are about to start a new chapter in the Bangsamoro struggle for self-determination,” said former ARMM Gov. Mujiv Hataman.

Presidential peace adviser Carlito Galvez Jr. said that despite his failing health, Jaafar “went the extra mile to join several campaign rallies to push for the realization of the Moro people’s aspiration for a genuine and meaningful autonomy.”

Senate Majority Leader Juan Miguel Zubiri said the country “owes much of the peace embracing Mindanao and the Muslim communities nationwide to Jaafar.”

Peace advocate Baina Samayatin, executive director of the Moro Women Development Cultural Center, said Jaafar was “a great leader” in the struggle for self-determination of the Bangsamoro who would never be forgotten. —WITH REPORTS FROM CHRISTINE O. AVENDAÑO, JAYMEE T. GAMIL, PATRICIA DENISE M. CHIU, JEANNETTE I. ANDRADE AND MARLON RAMOS IN MANILA