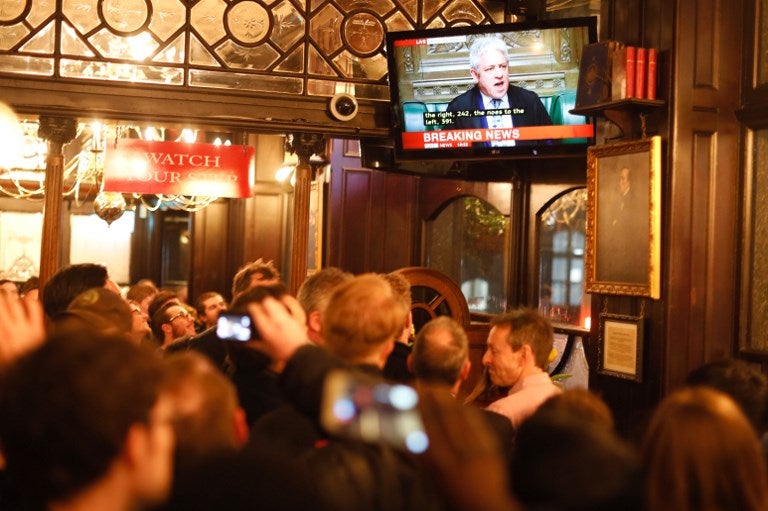 Drinkers watch a television screen in a pub in Whitehall as John Bercow, Speaker of the House declares that Prime Minister Theresa May’s Brexit deal was defeated by 149 votes in an historic parliamentary vote on March 12, 2019. AFP

LONDON, United Kingdom – Will Britons end up stranded in Frankfurt? Will UK shops run out of Swiss cheese and French wine?

The possibility of Britain breaking off from its main trading partner without any arrangements in place grew after parliament’s thumping rejection Tuesday of the Prime Minister Theresa May’s Brexit deal.

EU officials warned that the dreaded prospects of a “no-deal Brexit” kicking in when 2300 GMT strikes on March 29 had risen “significantly”.

But what actually happens when a 46-year relationship that generations have grown to accept suddenly ends without safety arrangements in place?

Here are some things London is telling its citizens to brace for right away.

Phone addicts could be out of luck.

Free roaming would no longer apply and UK mobile phone operators can start charging extra for subscribers who pop off to “the continent”.

British officials insist that 90 percent of UK and EU carriers have promised not to quickly raise rates.

But there is no guarantee against charges going up in the months to come.

London is also urging people in Northern Ireland to watch out for “inadvertent roaming” when straying too close to the EU border with Ireland.

Huge European airports such as Frankfurt can be a nightmare at the best of times.

But planes getting grounded because of lost licenses would create chaos that ripples across the world.

London and Brussels have made contingency plans allowing UK carriers to continue flying to EU countries even if a deal is never approved.

But these are bare-bones arrangements that do not allow British airlines to conduct intra-EU flights.

And even these are due to expire after just six months. This means that Britons who book their Christmas vacations early might want to exercise caution this time around.

Britons could need to start signing their name. A lot.

Thousands of companies in Britain that do business with Europe would have to fill out reams of customs and duties declarations.

British tourists to the EU who want to rent a car may need to get international driving permits because their UK licenses become invalid.

And even pets might need to jump through new administrative hoops that require them to have new passports.

People might want to check theirs as well. Those that expire within six months of travel will need to be renewed in advance.

Things turn more serious for those who rely on prescription drugs.

Two-thirds of the medicines used in Britain are imported from the EU.

Officials have urged pharmaceutical companies to create a six-week “buffer stock” on top of the three months they already have in place.

This should help cover any short-term disruptions at the border. Britain will also waive the need for EU firms to re-test their drugs under new rules.

The British government says “increased costs and slower processing times” for payments made in euros are a possibility.

Parcel deliveries could also get more expensive because waivers for certain import and sales taxes would expire.

Catching up on the latest Netflix releases while coasting on a high-speed Eurostar train may become harder.

Britons could theoretically lose access to streaming services while abroad — everything from Spotify to Amazon Prime — because the UK would no longer be in Europe’s “digital single market”.

And the Eurostar service itself might be in trouble because old licences of UK train operators in Europe will be invalid.

Britons are proud of their Stilton cheese and Scotch whisky.

But the status of everything from Cornish pasties to Melton Mowbray pork pies will be up in the air because they will lose their “geographical indication” status in Europe.

Britain’s 86 GI-protected products make up a quarter of all its food and drink exports.

A host of other industries and products could also be affected.

Caviar supplies might start running out because Britain will not be able to trade in goods covered by European endangered species rules.