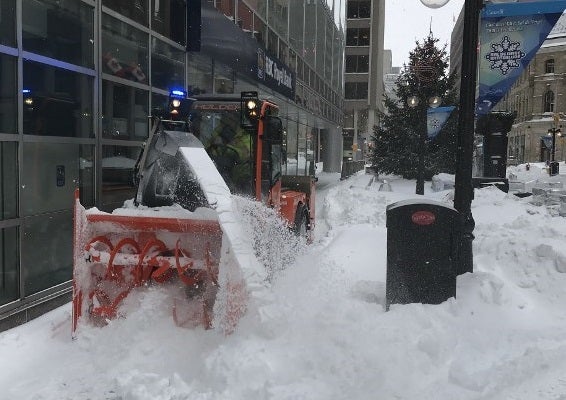 A man clears snow from sidewalks on February 13, 2019, in downtown Ottawa, Ontario, as a massive winter storm dumped one of the largest snowfalls of 2019.  AFP FILE

OTTAWA, Canada – Canadian officers have rescued an elderly man who was trapped in his home for weeks by snow accumulated in his driveway and around his house, police and local media said.

Called by worried neighbors upon their return from vacation in Florida, the police in the Canadian capital “found a winter’s worth of snow piled high in the driveway with no tracks and no signs of life” at the house, they tweeted Friday.

After forcing their way into the house and fearing the worst, the police found the man alone and alive. He told them that he had been subsisting on what he had in the pantry, rationing and eating canned food.

It took officers an hour and a half to clear the snow.

“Officers will bring him groceries and contacting services to ensure he has supports moving forward,” police tweeted.

Ottawa has accumulated more than two meters (yards) of snow since the beginning of winter, including one storm in February during which more than 30 centimeters (12 inches) forced authorities to close the schools.

According to local media, the man is in his 70s and considered a recluse by neighbors.

Police did not say how long he was trapped in his home, but local media said he was stuck there for several weeks. /cbb