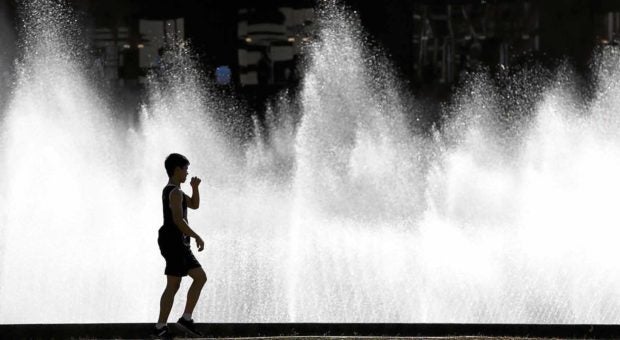 A runner shields himself from water flowing from a fountain in Manila. Parts of Metro Manila face the prospect of being with little or no water supply as the water level declines at La Mesa Dam. (File photo by LYN RILLON / Philippine Daily Inquirer)

MANILA, Philippines — Manila Water has apologized for unexpected water service interruption in some areas in Metro Manila from Thursday night to Friday morning (March 7 and 9).

“We sincerely apologize for the inconvenience brought by the unexpected water service interruption experienced by our customers across the East Zone,” the management said in a tweet on Friday evening.

Manila Water previously announced that it would adjust its operations as the water level at La Mesa Dam had decreased.

The company mentioned areas that will be affected by the operations and will experience low pressure to no water during peak hours.

Manila Water said people in areas that were not supposed to be affected by the operations started storing water so that the “reservoirs were not completely” refilled from Thursday until Friday morning.

The company said it had started to augment the supply in reservoirs so it could bring back water service to the affected areas.

Meanwhile, it made this appeal: “We urge our customers to use water more responsibly and wisely in light of the weak El Niño we are currently experiencing and the rapid decline of water levels at La Mesa Dam while Manila Water continues to employ augmentation plans to mitigate the impact of these realities.”

The company also advised the public to continue monitoring its online channels for updates on the water supply situation.

SERVICE ADVISORY: Here are the affected areas caused by the operational adjustments conducted by Manila Water to address…