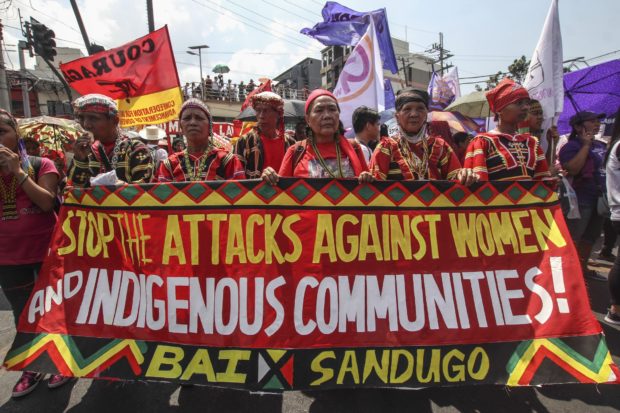 PROTEST, NOT CELEBRATION “Lumad” teachers and students join other women’s groups in Mendiola to mark International Women’s Day on Friday. The lumad women paid tribute to their women leaders, teachers and human rights defenders, and protested the attacks against indigenous communities. —EARVIN PERIAS

As the world marked International Women’s Day on Friday, a United Nations official commended the Philippines for narrowing the gap between women and men when it comes to rights and opportunities, but also noted that more efforts were needed to reduce childbirth-related deaths as well as incidents of sexual and physical violence among women and girls.

Ola Almgren, the UN resident coordinator in the Philippines, said the country’s efforts to increase women’s representation in national and global centers of power have contributed to it ranking eighth in the 2018 Gender Gap Report of the World Economic Forum.

The report rates 149 countries on their progress toward gender parity on four indicators: economic participation and opportunity, educational attainment, health and survival, and political empowerment.

Almgren cited several outstanding Filipino women who have put the country on the map, including Dr. Jane Gerardo-Abaya, who was appointed this year as one of the directors of the International Atomic Energy Agency, the world’s preeminent organization for nuclear technology, and its safe and peaceful applications.

The UN official also recalled the International Labor Organization’s citation last February of four Filipino women who have distinguished themselves in science, technology, engineering and mathematics.

But Almgren said recent statistics also showed that of 100,000 Filipino women who give birth, 114 do not survive, a mortality rate higher than other countries in Southeast Asia.

The recent adoption of the Universal Health Care Act, or Republic Act No. 11223, if fully implemented, “will go a long way in addressing the weaknesses of the health system,” he said.

Almgren also noted the continuing exposure of Filipino women to sexual violence, with a 2017 National Demographic and Health Survey showing that 14 to 15 percent of Filipino girls age 13 to 17 have been sexually violated.

“We welcome ongoing legislative advocacy to strengthen the Anti-Rape Law in order to raise the age of consent from below 12 to 16, and to remove the ‘forgiveness clause; by which the subsequent marriage between the offender and the victim extinguishes the criminal action or the corresponding penalty,” Almgren said.

In his message on International Women’s Day, President Duterte stressed the need to create an “enabling environment for women … and to make sure that the Magna Carta for Women is properly implemented at all levels of government.”

Amid criticisms that his remarks and jokes about women have normalized sexual violence against them, Duterte urged Filipinos to work together in addressing women’s needs and to recognize their important role in society.

In Malacañang, presidential spokesperson Salvador Panelo said the President’s recent signing of several women-friendly laws was proof of his commitment to women’s rights.

Panelo cited Republic Act No. 11210, which extended the maternity leave of female workers from 60 to 105 days; Republic Act No. 11148, which ensures the health of both mother and baby in the early stages after giving birth; Republic Act No. 11165, or the telecommuting law which, he said, creates an alternative and more convenient work arrangement for most Filipino women, and Executive Order No. 12, which seeks to implement the Responsible Parenthood and Reproductive Health Act of 2012.

He also mentioned the recently approved intensified implementation plan for the National Program on Family Planning which, he said, will benefit 11 million women.

“We have witnessed Duterte’s belittling of and assaults against women, especially those who oppose human rights violations, the surrender of the country’s sovereignty, and the attacks on our democratic principles,” the senator detained on drug-related charges said in a message read during the Women’s Day gathering at St. Scholastica’s College in Manila.

Thousands of women took to the streets of Manila on Friday to protest President Duterte’s alleged misogyny through remarks and jokes on rape and sexual assault, and his confession that he had indecently “touched” the family maid in his youth.

Protest leader Joms Salvador of women’s group Gabriela said Duterte’s “misogynistic” statements were “unacceptable, be they jokes or not, (since) law enforcers construe them as policy pronouncements. They (also) embolden criminals,” she said. —With reports from Julie M. Aurelio, Marlon Ramos and AFP