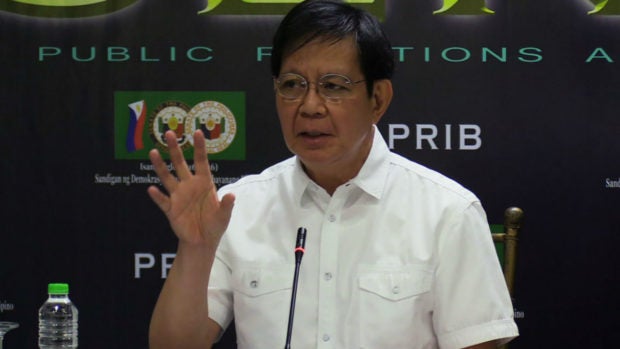 MANILA, Philippines — Even after the ratification of the 2019 national budget, Speaker Gloria Macapagal-Arroyo has allegedly directed the realignments of P25 million budget from the Department of Health (DOH) for her “favored” congressmen.

Senator Panfilo Lacson made this revelation anew on Tuesday, citing information from some congressmen.

“The 2019 national budget is doomed, but not to our own liking,” Lacson said in a text message to reporters.

“I will raise a big legal issue before my colleagues in the Upper House out of this latest scheme that our Lower House counterparts led by Speaker Arroyo are resorting to in order to manipulate the ratified bicameral committee report,” he said.

Lacson, citing information from some congressmen, claimed that Arroyo ordered the preparation and imposition of the menu list of the DOH appropriations for Health Facilities Enhancement Program (HFEP) worth P25 million “in individual allocations for her favored congressmen, including a P2.5 million allocation for the purchase of an ambulance.”

Only P8 million, he said, are being distributed to those who did not support Arroyo’s election as speaker.

Arroyo was elected Speaker of the House of Representatives after a controversial power grab just before President Rodrigo Duterte’s state of the nation address in July last year.

Lacson said this latest brazen, “illegal act” after the ratification of the 2019 budget “smacks of grave abuse of discretion on the part of Speaker Arroyo” and a clear violation of the 1987 Constitution.

He cited in particular a provision in the Constitution, which states that: “Upon the last reading of a bill, no amendment thereto shall be allowed.”

The Senate and the House already ratified the 2019 budget last February 18, but it has yet to be transmitted to the President for signature.

“I maintain, and I trust that majority of my colleagues in the Senate will agree, that such realignments ordered by Speaker Arroyo prior to the printing of the proposed 2019 budget is clearly unconstitutional and inappropriate,” Lacson said.

“Needless to say, and it is basic in our legislative process that the House as a body has the sole power to make the amendments, not the Speaker, and certainly not after the ratification of the bicameral report,” he further said. /jpv

Lacson to spare no one in fight vs pork

US to impose visas restrictions for pregnant women