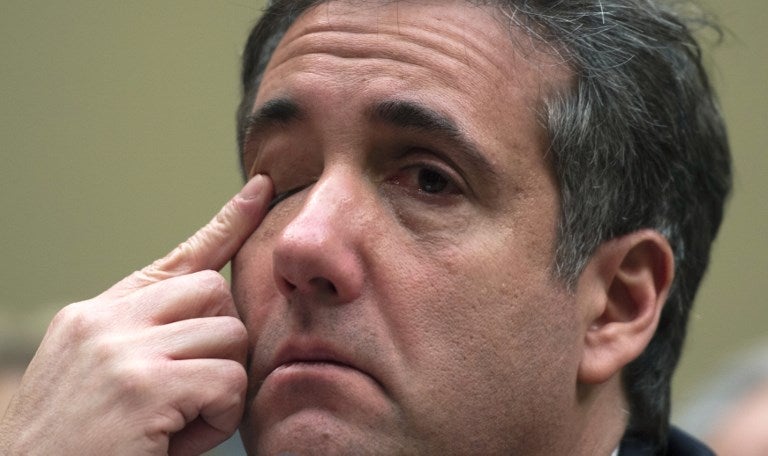 WASHINGTON, United States – Donald Trump’s former personal lawyer Michael Cohen turned on his former boss in a dramatic congressional appearance Wednesday, calling the US president a conman and inveterate liar who engaged in possibly illegal conduct while in office.

And Cohen asserted that personal lawyers for Trump and his family reviewed his written testimony to Congress in 2017 in which he lied about a Moscow real estate deal that was negotiated through the 2016 presidential race.

Cohen, who worked for Trump for over a decade as his lawyer and vice president in the Trump Organization, was sentenced in December to three years in prison for the hush payments and lies to Congress — both of which he said were to protect Trump — as well as for tax evasion.

But in a marathon hearing Cohen offered no fresh evidence that Trump or members of his campaign colluded with Russia during the race, or evidence of financial crimes by the president and his Trump Organization — subjects at the center of multiple federal and congressional investigations.

Instead, Cohen spoke damningly and at length about Trump’s character — depicting him as a morally corrupt figure who forces staff to constantly lie for him, and who cares only about himself.

“Today, I am here to tell the truth about Mr. Trump,” Cohen told the nationally-televised hearing.

During the hearing, Cohen hit out at Trump for what he said was threatening behavior against him and others on Twitter, where the president has nearly 60 million followers — accusing him of becoming an “autocrat.”

“When he goes on Twitter and he starts bringing in my in-laws, my parents, my wife, what does he think is going to happen?”

“He’s becoming an autocrat, and hopefully something bad will happen to me or my children or my wife so that I will not be here and testify,” Cohen said. “That’s what his hope was, to intimidate me.”

No evidence of collusion

But on the key issue of whether Trump worked with the Russians to get himself elected — Cohen delivered no knock-out blow.

“Questions have been raised about whether I know of direct evidence that Mr. Trump or his campaign colluded with Russia,” he said.

“I do not, I want to be clear. But I have my suspicions.”

Cohen said Trump knew ahead of time — via the political consultant Roger Stone — that WikiLeaks would publish damaging information obtained from Russian hackers on his Democratic rival Hillary Clinton.

He also said he believed Trump was informed ahead of time about a June 2016 meeting between his campaign and a Russian lawyer peddling “dirt” on Clinton.

Beyond that, Cohen claimed US authorities are investigating other possible illegal activities involving the president.

Asked if he was aware of “any other wrongdoing or illegal act” regarding Trump that had not been addressed in the hearing, Cohen replied that he was, but could not discuss details because “those are part of the investigation that are currently being looked at by the Southern District of New York.”

Trump, in Hanoi for a second nuclear summit with North Korean leader Kim Jong Un, sought to discredit Cohen ahead of the testimony.

“Michael Cohen was one of many lawyers who represented me (unfortunately),” Trump tweeted. “He was just disbarred by the State Supreme Court for lying & fraud. He did bad things unrelated to Trump. He is lying in order to reduce his prison time.”

But Cohen was cheered on by Stormy Daniels — real name Stephanie Clifford — who praised him for telling the “truth,” while sympathizing with his claim he feels threatened by the president.

“I understand your fear, Michael. I have a family too,” she said. /cbb