Kim, Trump get down to business over North Korean nukes 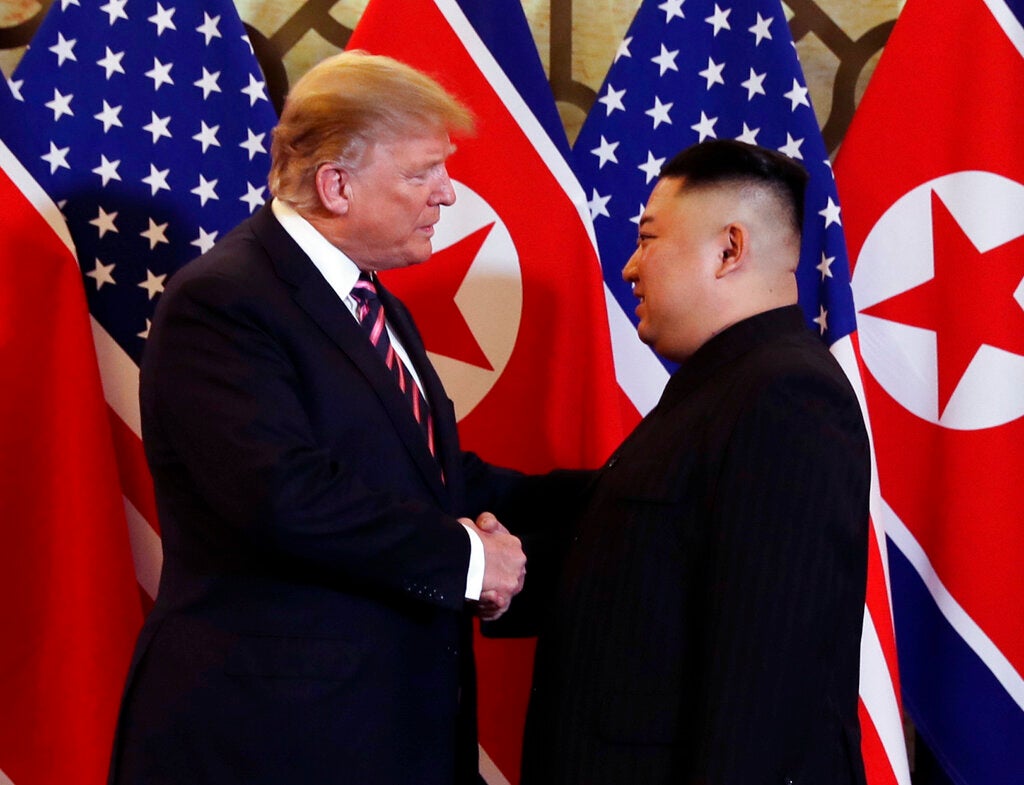 HANOI, Vietnam – After warm greetings and a “social dinner”, US President Donald Trump and North Korean leader Kim Jong Un get down to business Thursday, with formal summit talks aimed at breaking the deadlock over Pyongyang’s nuclear program.

The two men who once traded personal insults and threats of destruction are holding their second meeting in eight months, with analysts warning it needs to produce more substance than their initial historic get-together in Singapore.

That summit resulted in warm images but only a vague commitment from Kim to “work toward complete denuclearization of the Korean peninsula.” Diplomacy has since stalled amid disagreements on what that actually means.

Trump described Kim as a “great leader” and said his country had “tremendous economic potential, unbelievable, unlimited” as he vowed to “help” North Korea achieve those goals.

In return, Kim appeared to have been counting the days until he saw Trump again.  “We came all the way to Hanoi to meet again, 261 days later,” he told the US president, vowing to do his best to ensure a “great outcome” from the talks.

The pair then enjoyed an intimate dinner with just their closest aides and again beamed for the camera, Trump touting their “special relationship”.

It was a far cry from the height of missile testing tensions in 2017 when Trump slammed Kim as “rocket man” and the younger man branded the US president a “mentally deranged US dotard”.

Analyst Daniel Davis, Senior Fellow at Defense Priorities, said: “When you look at from where we were in December 2017, when we were literally on the brink of potential war… we’re moving in the direction of peace and nobody’s even talking about war right now.”

“That by itself is a major victory,” he told AFP.

In the event, scandal back home in Washington threatens to distract Trump with his former personal lawyer and fixer Michael Cohen calling him a “racist” and a “conman” during a congressional hearing.

The president already showed he had the testimony at the back of his mind when he tweeted a reaction before his first meeting with Kim, saying Cohen — who has been sentenced to three years in jail — was “lying in order to reduce his prison time”.

But on Thursday, the leaders have to dig into the detail of denuclearization and put flesh on the bones of the vague Singapore declaration.

Kim is looking for relief from biting sanctions for his deeply impoverished country, as well as security guarantees for him and his regime.

One carrot could be a declaration to end the Korean War, which ended in 1953 with an armistice not a formal peace treaty. Asked about that before dinner, Trump merely replied: “We’ll see.”

Also mooted is the possibility of opening liaison offices, the first step on the road to normalizing diplomatic relations.

In return, Kim might pledge to destroy North Korea’s decades-old Yongbyon nuclear complex, which has long been at the heart of Pyongyang’s atomic development but remains shrouded in secrecy — and North Korea has promised to mothball it twice before.

In the run-up to the Hanoi summit, however, Trump appeared to lower expectations for the outcome, saying he was in “no rush” to rid the North of its nuclear arsenal and was content if the pause in nuclear and missile testing continued.

Since arriving in Vietnam, Trump has frequently pointed to the recent history of the country — once a war-torn foe of the United States, now enjoying an economic boom with growth of more than seven percent.

Hailing Kim as a “friend”, he said North Korea could enjoy an “AWESOME” future if it gave up its nukes, but most analysts say that outcome is extremely unlikely.

Flag-waving crowds have welcomed the leaders in Hanoi.

“I hope North Korea will be in a better economic situation so that people there suffer less,” office worker Nguyen Thi Hong told AFP. “North Korea should learn from Vietnam.”

But some residents were unimpressed by the delegation’s motorcades snarling the city’s already clogged streets.

A guard who gave his name as Tam said: “Yeah it’s nice to welcome world leaders but it really creates problems for city residents traveling around.” /cbb