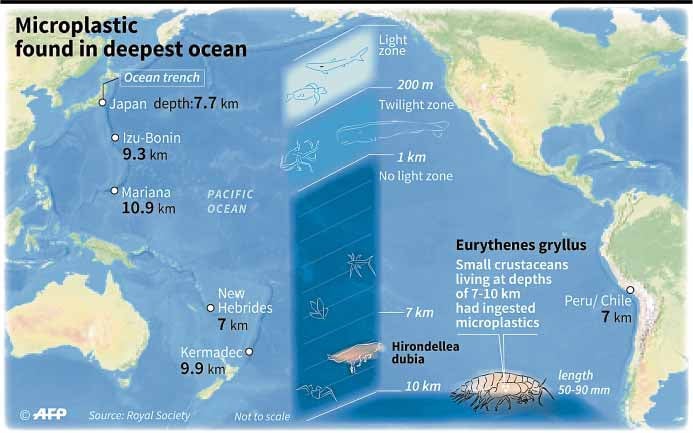 PARIS — Animals living in the deepest ocean trenches have been found with plastic fragments in their gut, according to new research published on Wednesday showing how manmade pollution reaches into the bowels of the planet.

More than 300 million tons of plastics are produced annually, and there are at least five trillion plastic pieces floating in our oceans.

Because deep-sea exploration is expensive and time-consuming, most studies on plastic pollution up until now had been close to the surface, showing a widespread level of plastic contamination in fish, turtles, whales and sea birds.

Now, a British team of researchers say they have discovered cases of plastic ingestion among tiny shrimp in six of the world’s deepest ocean trenches.

In the Mariana Trench east of the Philippines, the deepest depression on Earth, 100 percent of the animals studied had plastic fibers in their digestive tracts.

“Half of me was expecting to find something, but that is huge,” said Alan Jamieson, from Newcastle University’s School of Natural and Environmental Sciences.

Jamieson and his team normally spend their time looking for new species in the depths of the ocean.

But they realized that during the course of expeditions dating back a decade, they had accumulated dozens of specimens of a species of tiny shrimp that lives between 6,000 and 11,000 meters beneath the surface.

They decided to look for plastic.

“We are sitting on the deepest dataset in the world, so if we find (plastics) in these, we are done,” Jamieson told Agence France-Presse (AFP).

The team was astonished by just how widespread the plastic contamination at extreme depths proved to be.

For instance, the Peru-Chile Trench in the southeast Pacific is around 15,000 kilometers from the Japan Trench. Yet plastic was found in both.

“It’s off Japan, off New Zealand, off Peru, and each trench is phenomenally deep,” Jamieson said.

“The salient point is that they are consistently found in animals all around the Pacific at extraordinary depths, so let’s not waste time. It’s everywhere.”

Of the 90 individual creatures the team dissected, 65, or over 72 percent, contained at least one plastic microparticle.

The study, published in the journal Royal Society Open Science, said it was unclear if the particles had been ingested by fish at higher depths which then died and sank.

But when the team analyzed the fibers—most of which appeared to be clothes fabrics such as nylon—they found that the plastics’ atomic bonds had shifted compared to brand-new material, suggesting they were several years old.

Microplastic particles are either dumped directly into the seas via sewers and rivers or formed when larger chunks of plastic break down over time.

Once they start gathering bacteria, they get heavier and eventually sink.

“So even if not a single fiber were to enter the sea from this point forward, everything that’s in the sea now is going to eventually sink, and once it’s in the deep sea, where is the mechanism to get it back?” asked Jamieson.

“We are piling all our crap into the place we know least about.”

Because plastic contamination is now so widespread, even at extreme depths, the team cautioned that it was nearly impossible to know what effect plastic ingestion was having on bottom-dwelling species.

“These particles could just pass straight through the animal, but in the animals we looked at, they must be blocking them. The equivalent would be for you to swallow a 2-meter polypropylene rope and expect that not to have an adverse affect on your health,” Jamieson said.

“There’s no good aspect to this.”