Okinawa referendum rejects relocation for US military base 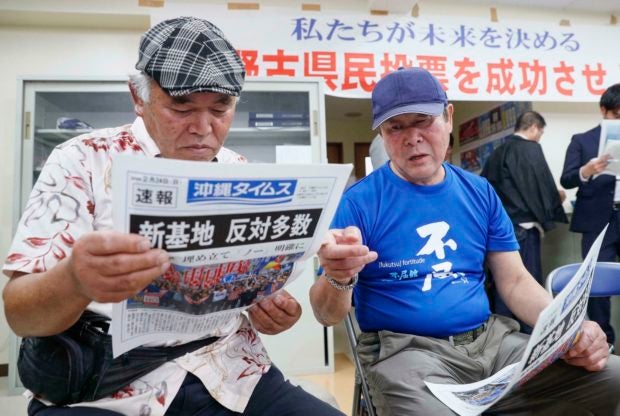 People take a look at a copy of a local newspaper reporting a referendum in Naha, Okinawa, Japan, Sunday, Feb. 24, 2019. The people of Okinawa voted Sunday on a plan for a U.S. military base relocation in a referendum that will send a message on how they feel about housing American troops in Japan, who many see as a burden on the group of tiny southwestern islands. The headline reads “New Base, Opposition majority.”(Kyodo News via AP)

TOKYO  — The residents of Japan’s southwestern island region of Okinawa have rejected a relocation plan for a U.S. military base that was put to a referendum, increasing pressure on the national government to change its stance that the facility will be built no matter what.

The results of Sunday’s vote showed 72 percent opposed the plan for the Marines air base being built on a landfill in coastal Henoko. Support for the relocation plan totaled 19 percent.

The referendum is not legally binding but underlines Okinawans’ sentiment on the relocation plan.

Henoko is to replace another base on the island in Futenma that is in a more residential area and has long been criticized as noisy and dangerous. The U.S. military, while declining comment on the referendum, has said the Henoko agreement is needed for regional security.

Critics of Henoko say wildlife such dugong and coral reefs will be hurt. Many people in Okinawa want Futenma closed but think the rest of Japan should help by sharing in the burden of hosting U.S. troops.

Okinawa Gov. Denny Tamaki, who spearheaded the referendum, said the results must be respected.

“This holds extremely important meaning,” he said Monday after the tally came in.

Prime Minister Shinzo Abe told reporters early Monday that the government accepted the feelings of Okinawa’s people but stressed the Henoko plan won’t get changed. The government has repeatedly said the relocation plan will move ahead, regardless of the referendum.

Nevertheless, the referendum will add momentum to Tamaki’s renewed efforts against the U.S. bases. The sentiments have resonated not only with the residents of the subtropical islands of Okinawa but also the rest of Japan and internationally.

Tamaki has said he hopes to deliver the results of the referendum to U.S. President Donald Trump.

Government spokesman Yoshihide Suga reiterated Abe’s view, telling reporters that Futenma remains dangerous and the relocation is needed to close Futenma. He said he hoped to discuss with Tamaki what he might have in mind for Futenma.

Suga also said the government will step up efforts to win understanding from Okinawa residents.

The relocation plan has its beginnings in 1995, when outrage erupted against U.S. service members over the rape of a 12-year-old girl. Washington also agreed to transfer some personnel to the U.S. Pacific territory of Guam.

Nearly 1.16 million residents were eligible to vote in Sunday’s referendum.

Although Okinawa makes up less than 1 percent of Japan’s land space, it houses about half of the 54,000 American troops stationed in Japan, and is home to 64 percent of the land used by the U.S. bases in the country under a bilateral security treaty.

Complicating matters is the historical suffering of Okinawa, where huge civilian casualties were recorded in the closing days of World War II. The bloodiest battles were fought on Okinawa. Okinawa also remained under U.S. occupation and was not returned to Japan until 1972. / gsg