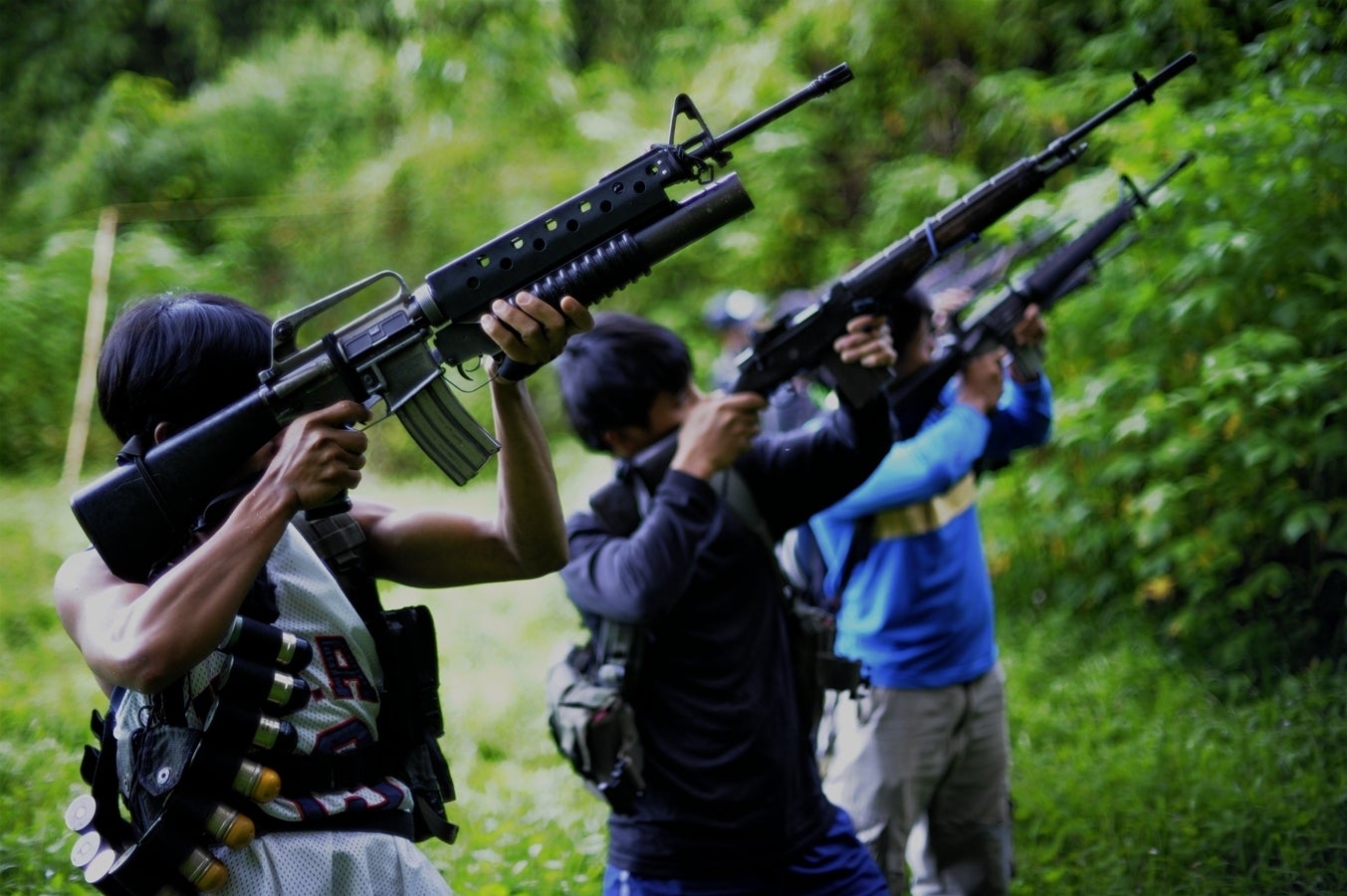 New People’s Army guerrillas during a training session somewhere in the Cordilleras in June 2013. —EV ESPIRITU

“How can he (Duterte) make such a survey finding when his military and police minions cannot locate the thousands of Red commanders and fighters in more than 110 guerrilla fronts?” Sison said in a statement from his base in Utrecht in the Netherlands Monday.

He added: “These armed revolutionaries reveal their momentary location only when they are already ambushing or raiding his armed minions”.

Sison made the statement after Duterte claimed in a speech in Biñan, Laguna over the weekend that his son, Sebastian “Baste” Duterte, was allegedly abused by gay NPA rebels during the turn-over of the captured two soldiers and six militiamen in Bayugan City, Agusan del Sur on Tuesday morning, February 19.

The rebel’s “prisoners of war” were received by former Special Assistant to the President Christopher Lawrence “Bong” Go and Sebastian in a formal ceremony held in the hinterlands of Barangay San Juan.

But according to Duterte, his son was “abused” by the NPAs during their stay in the NPA lair.

He said he asked his son how the turnover went, to which Sebastian said he was buzzed on the cheeks by the communist rebels.

“I was kissed by everyone’. ‘Oh, so you were abused’. He said, ‘Yes, everyone got to kiss me’”, he said quoting Sebastian.

Sison retorted that the President could probably invent the story as a joke.

“In making a joke, Duterte has obviously invented the story that gays in the NPA brought his son Baste to the woods to be subjected to kissing, mashing and other acts amounting to molestation,” said Sison.

But he warned that if indeed anyone in the NPA molested or took liberties with the President’s son, “they would face disciplinary action, aside from experiencing the discomfort in discovering the truth of what Duterte had earlier said that he and Baste are congenital stinkers because the sewage system of their bodies cannot dispose of the waste of their food intakes and they suffer long periods of constipation.”

Sison asserted that “there is a strict NPA rule of discipline against sexual molestation and taking sexual liberties against the will of others”.

“It is up to the NPA command concerned to inform us how Baste was treated,” he said.

He said Duterte is “again exposing his misogynist and anti-gay character by with his macho kind of joke.”

Sison admits that the revolutionary forces accept LGBT (lesbian, gay, bisexual and transgender” into their ranks.

“The men, women and LGBT are qualified to become Red commanders and fighters so long as they are 18 years or older, and are able-bodied, have revolutionary commitment and are willing to undertake politico-military training, to do mass work and to fight the enemy with firearms,” he explained.

Read Next
Princess Rima bint Bandar: First Saudi woman ambassador
EDITORS' PICK
Smart three-peats as country’s fastest mobile network – Ookla
Would the military allow me to stay this long if I’m inutile? – Duterte
In good spirits: SMDC helps farmers and residents through Kadiwa Market
Pre-order the new vivo Y20s [G] to get a free TWS earphone
65% of Filipinos say Duterte’s health should be made public – SWS
DSWD chief admits ‘slow start’ in distribution of aid in ‘NCR Plus’
MOST READ
Vico Sotto frets getting photos of ‘butt vaccination’ from Pasig dwellers
Metro Manila to have shortened curfew hours from 8 p.m. to 5 a.m. under MECQ
San Miguel Corp. continues to invest heavily in the Philippines’ future
COVID-hit Roque slams ‘un-Christian’ query on how fast he secured hospital bed
Don't miss out on the latest news and information.