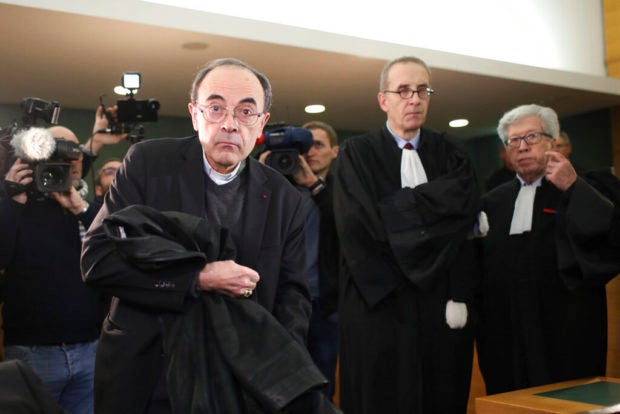 In this Jan.7, 2019 file photo, cardinal Philippe Barbarin (center) takes his seat as he arrives at the Lyon courthouse with his lawyers: Jean-Felix Luciani (2nd right) and Andre Soulier (right) to attend his trial, in Lyon, central France.  AP

PARIS — A French Catholic Church official says the country’s bishops have “agreed in principle” to provide financial compensation to sex abuse victims whose cases are too old to be taken to court.

Vincent Neymon, the deputy general secretary of the French bishops’ conference, says he hopes a system for making “a financial gesture” to victims will be in place in under a year.

France hasn’t been immune to the clerical abuse scandal that is the topic of a Vatican summit continuing Friday.

The French church had been reluctant to create a victims compensation program like many other national bishops’ conferences but received pressure from people whose cases exceeded the statute of limitations on child sex crimes.

France recently extended the limit from 20 to 30 years after a victim turns 18. /ee