From Syria, IS slips into Iraq to fight another day 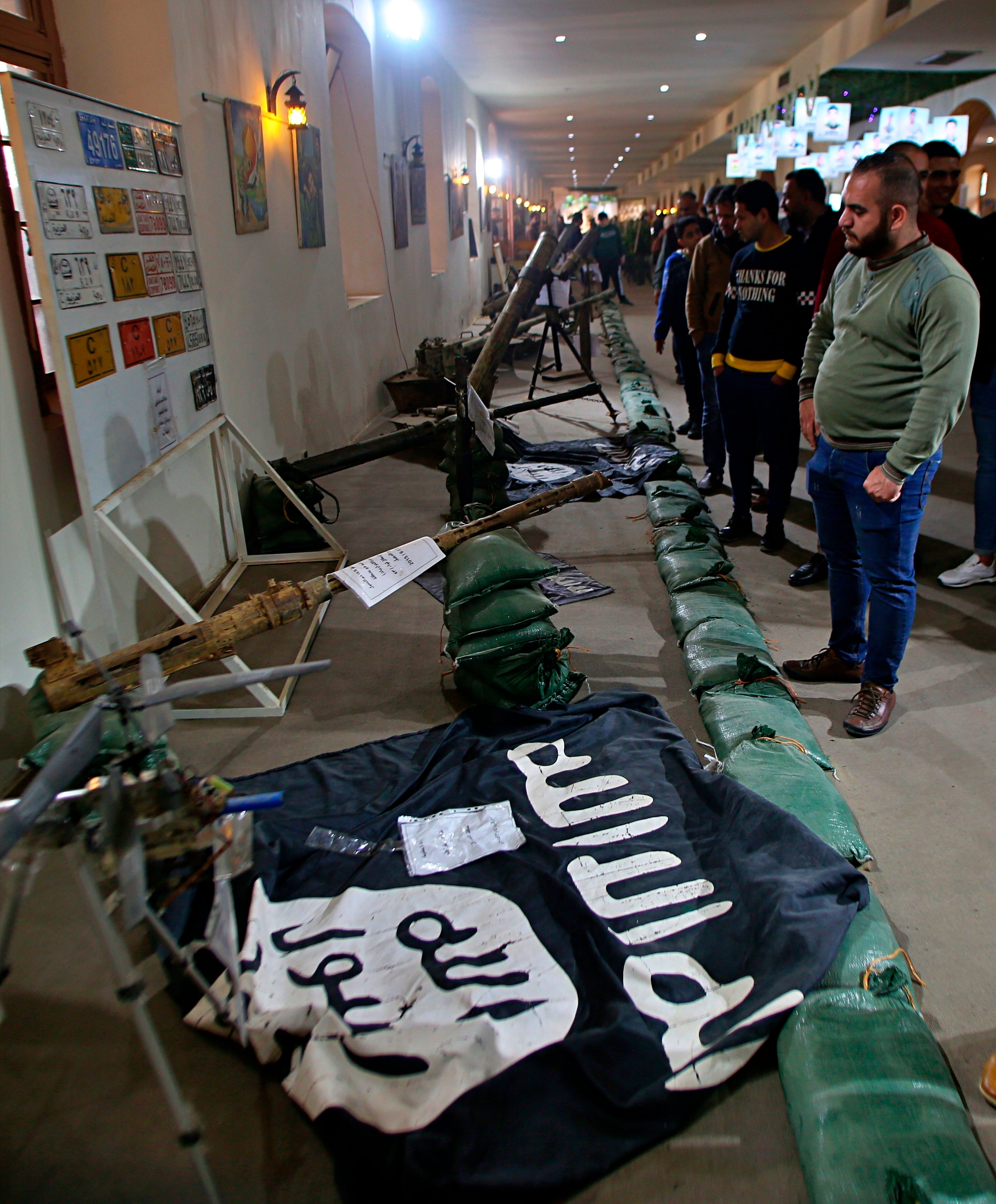 In this February 1, 2019 file photo, a flag of the Islamic State group and some of the weapons they used in battle, are on display in the Popular Mobilization Forces War Museum in Baghdad, Iraq. U.S. and Iraqi officials say IS fighters facing defeat in Syria are slipping across the border into Iraq, where they are destabilizing the country’s fragile security. Hundreds — likely more than 1,000 — IS fighters have crossed the open, desert border in the past six months. (AP Photo/Khalid Mohammed, File)

BAGHDAD — Islamic State (IS) fighters facing defeat in Syria are slipping across the border into Iraq, where they are destabilizing the country’s fragile security, U.S. and Iraqi officials said.

Hundreds — likely more than 1,000 — IS fighters have crossed the open, desert border in the past six months, defying a massive operation by U.S., Kurdish, and allied forces to stamp out the remnants of the jihadi group in eastern Syria, according to three Iraqi intelligence officials and a U.S. military official.

The officials spoke on condition of anonymity because they were not authorized to comment publicly on intelligence matters. But indications of the extremist group’s widening reach in Iraq are clear.

Cells operating in four northern provinces are carrying out kidnappings, assassinations, and roadside ambushes aimed at intimidating locals and restoring the extortion rackets that financed the group’s rise to power six years ago.

“IS is trying to assert itself in Iraq, because of the pressure it is under in Syria,” said Brig. Gen. Yahya Rasoul, the Iraqi army spokesman.

The militants can count between 5,000 and 7,000 among their ranks in Iraq, where they are hiding out in the rugged terrain of remote areas, according to one intelligence official.

In Syria, Kurdish-led forces backed by the U.S.-led coalition have cornered the militants in a pocket less than one square kilometer in Baghouz, a Euphrates River village near the 600-kilometer (370-mile) border.

The Iraqi army has deployed more than 20,000 troops to guard the frontier, but militants are slipping across, mostly to the north of the conflict zone, in tunnels or under the cover of night. Others are entering Iraq disguised as cattle herders.

They are bringing with them currency and light weapons, according to intelligence reports, and digging up money and arms from caches they stashed away when they controlled a vast swath of northern Iraq.

“If we deployed the greatest militaries in the world, they would not be able to control this territory,” Rasoul said. “Our operations require intelligence gathering and airstrikes.”

At its height in 2014 and 2015, the Islamic State group ruled over a self-proclaimed “caliphate” that spanned one-third of Iraqi and Syrian territory. The extremist offshoot of Al-Qaida in Iraq threatened to exterminate religious minorities.

Iraqi forces, with U.S., Iranian, and other international help, were able to turn the war around and Baghdad declared victory over the group in December 2017, after the last urban battle had been won.

But precursors to IS have recovered from major setbacks in the past, and many fear the militants could stage a comeback. The group is already waging a low-level insurgency in rural areas.

The Associated Press verified nine IS attacks in Iraq in January alone, based on information gathered from intelligence officials, provincial leaders, and social media. IS often boasts of its activities through group messaging apps such as Telegram.

In one instance, a band of militants broke into the home of a man they accused of being an informant for the army, in the village of Tal al-Asfour in the northern Badush region. They shot him and his two brothers against the wall, and posted photos of the killing on social media.

Sheikh Mohamed Nouri, a local tribal leader, said it was meant to intimidate locals in order to keep them from sharing intelligence with security officials.

“I have members of our tribal militia receiving threatening messages warning them to abandon their work,” said Nouri.

In other instances, IS cells have killed mukhtars — village leaders and municipal officials. They have attacked rural checkpoints with car bombs and mortar fire, and burned down militia members’ homes. In the Shurgat area in central Iraq, militants stopped a police vehicle last month and killed all four officers inside.

Other activities have aimed at restoring the group’s financial footing.

On Sunday, militants kidnapped a group of 12 truffle hunters in the western Anbar province, marking a return to a strategy of intimidating and extorting farmers and traders for financial gain.

Naim Kaoud, the head of provincial security, urged locals to suspend truffle gathering, which has just one season a year and is an important source of income for rural families.

Other truffle hunters have disappeared in the countryside, according to former lawmaker and Anbar tribal figure Jaber al-Jaberi. He said the militants are taking cuts from truffle hunters in exchange for access to the land, and kidnapping or killing those who refuse to cooperate.

“This is one of the sources of their funding,” said al-Jaberi.

Al-Jaberi cautioned against exaggerating the IS threat, saying the militants have been less successful at infiltrating communities than they were earlier this decade.

“These are different times,” he said.

Others are not so sure. Hans-Jakob Schindler, a former adviser to the U.N. Security Council on IS and other extremist groups, said the same grievances that gave rise to IS in 2013 remain today, including a large Sunni minority that feels politically and economically marginalized by the Shiite-led central government.

“I’m very worried that we are just repeating history,” said Schindler, who is now at the Counter Extremism Project.

He said he has seen IS “revert to the old type” of “classical terror attacks” and kidnapping for ransom, tactics that were once widely employed by al-Qaida in Iraq.

The militants staged a dramatic resurgence after 2011, when U.S. forces withdrew from Iraq and civil war broke out in neighboring Syria. Today some 5,200 American forces are based in Iraq, after they were invited back to help stem the IS rampage in 2014.

After President Donald Trump promised in December to pull American forces out of Syria, Iraqi lawmakers began clamoring for the U.S. to leave, arguing that the mission against IS was approaching its end.

But with no letdown to IS militancy, those calls have petered out. /kga