Arrested by the CITF was Supt. Armandy Dimabuyo, chief of the 402nd Cavite Maritime Police Station in Barangay Julugan 5. Dimabuyo was arrested during the entrapment inside an office of his unit.

CITF commander Senior Supt. Romeo Caramat Jr. said the entrapment stemmed from complaints of several owners of motorized bancas saying the suspect was demanding as much as P21,000 in cash per month from an association of fishermen in the area. 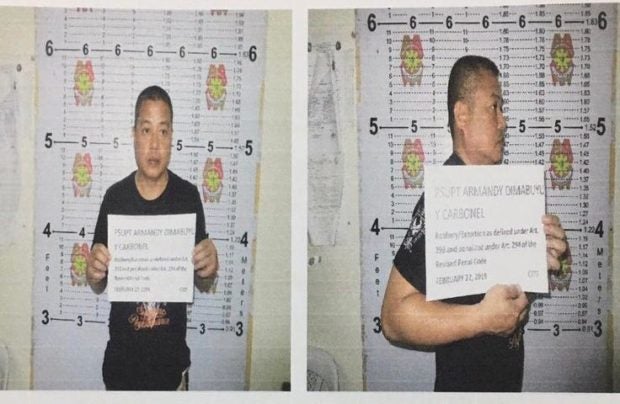 Supt. Armandy Dimabuyo, chief of the 402nd Cavite Maritime Police Station, poses for a mugshot after he was arrested on Friday, Feb. 22, 2019, for alleged extortion from fishermen in Tanza, Cavite. (Photo courtesy of PNP CITF)

According to the CITF, the cash given to Dimabuyo is considered as “protection money” as fishermen in the municipal waters of Tanza or within 15 kilometers from the town’s shore, are prohibited from using large bancas.

Caramat said Dimabuyo was caught in the act of receiving the P18,000 marked cash from one of the complainants.

PNP Maritime Group Director Chief Supt. Rodelio Jocson also relieved all personnel of the Cavite Maritime Section. They will be replaced by personnel from the Special Operations Unit of the Maritime Group.

The PNP meanwhile will be filing a case of robbery-extortion and an administrative complaint against Dimabuyo.  /muf