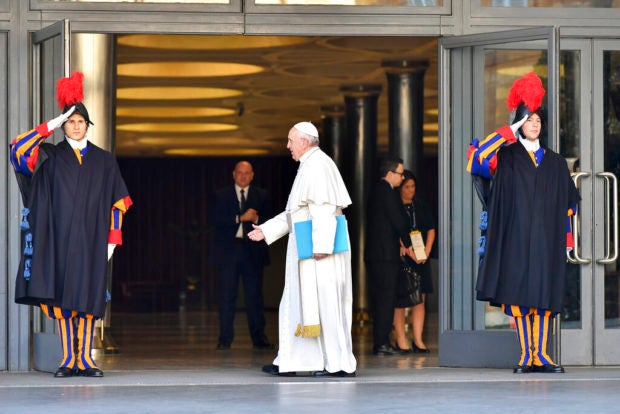 Pope Francis goes to greet a Vatican Swiss guard as he arrives for the opening of a sex abuse prevention summit, at the Vatican, Thursday, Feb. 21, 2019. The gathering of church leaders from around the globe is taking place amid intense scrutiny of the Catholic Church’s record after new allegations of abuse and cover-up last year sparked a credibility crisis for the hierarchy. (Vincenzo Pinto/Pool Photo via AP)

VATICAN CITY  — Pope Francis warned church leaders summoned Thursday to a landmark sex abuse prevention summit that the Catholic faithful are demanding more than just condemnation of the crimes of priests but concrete action to respond to the scandal.

Francis opened the four-day summit by telling the Catholic hierarchy that their own responsibility to deal effectively with priests who rape and molest children weighed on the proceedings.

“Listen to the cry of the young, who want justice,” and seize the opportunity to “transform this evil into a chance for understanding and purification,” Francis told the 190 leaders of bishops conferences and religious orders.

“The holy people of God are watching and expect not just simple and obvious condemnations, but efficient and concrete measures to be established,” he warned.

More than 30 years after the scandal first erupted in Ireland and Australia and 20 years after it hit the U.S., bishops and Catholic officials in many parts of Europe, Latin America, Africa and Asia still either deny that clergy sex abuse exists in their regions or downplay the problem.

Francis, the first Latin American pope, called the summit after himself botching a well-known sex abuse cover-up case in Chile last year. Realizing he had erred, he has vowed to chart a new course and is bringing the rest of the church leadership along with him.

The summit is meant as a tutorial for church leaders to learn the importance of preventing sex abuse in their churches, tending to victims and investigating the crimes when they occur.

In the keynote speech, Manila Cardinal Luis Antonio G. Tagle choked up several times as told the bishops that the wounds the scandal has caused among the faithful recalled the wounds of Christ on the cross. He demanded they longer run in fear or turn a blind eye to the harm caused by clergy sex abuse and their own inaction to halt the problem.

“Faith that would like to close its eyes to peoples’ suffering is just an illusion,” he said.

Abuse survivors have turned out in droves, coming to Rome to demand accountability and transparency from church leaders, saying the time of cover-ups is over.

Phil Saviano, who helped expose the U.S. abuse scandal by priests two decades ago, demanded that the Vatican release the names of abusers and their files.

“Do it to break the code of silence,” he told the organizing committee on the eve of the summit. “Do it out of respect for the victims of these men, and do it to help prevent these creeps from abusing any more children.”

The Vatican isn’t expecting any miracles or even a final document to come out of the summit, and the pope himself has tried to lower expectations.

But organizers say the meeting marks a turning point in the way the Catholic Church has dealt with the problem, with Francis’ own acknowledgment of his mistakes in handling the Chile abuse case a key point of departure.

“Our lack of response to the suffering of victims, yes even to the point of rejecting them and covering up the scandal to protect perpetrators and the institution has injured our people,” Tagle said in his speech. The result, he said, had left a “deep wound in our relationship with those we are sent to serve.”

Before the Vatican summit opened, activists in Poland pulled down a statue of a priest early Thursday after increasing allegations that he sexually abused minors. They said the stunt was to protest the failure of the Polish Catholic Church in resolving the problem of clergy sex abuse.

Video footage showed three men attaching a rope around the statue of the late Monsignor Henryk Jankowski in the northern city of Gdansk and pulling it to the ground in the dark. They then placed children’s underwear in one of the statue’s hands and a white lace church vestment worn by altar boys on the statue’s body.

The private broadcaster TVN24 reported the three men were arrested.

Jankowski, who died in 2010, rose to prominence in the 1980s through his support for the pro-democracy Solidarity movement against Poland’s communist regime. World leaders including President George H.W. Bush and British Prime Minister Margaret Thatcher visited his church in recognition of his anti-communist activity. / gsg

Read Next
‘Sin taxes’, PhilHealth contributions to boost Universal Health Care program
EDITORS' PICK
Cebu City closes its borders
IATF: Food firms to operate with 50% of workforce during Luzon quarantine
BREAKING: 1,075 people in PH has coronavirus disease – DOH
UP-PGH wards for COVID-19 patients finished in 5 days
Style and music journeys with Claudia Barretto
DILG to stranded workers: ‘Stay where you are’ until Luzon-wide quarantine is over
MOST READ
Locsin blasts DOH for blocking entry of Chinese doctors
Another doctor dies due to COVID-19 in Cebu City, doctor-husband critical
DOH pressed to expand, speed up virus testing
No more bread? Company forced to limit production
Don't miss out on the latest news and information.